I do miss the snow -- for although it seems more like winter when there is snow -- that moisture is imperative for the garden.


There are still 57 days until spring and we've been known to have snow in March -- so we may have some "winter" yet!


I'm joining Chari at Happy to Design for Sunday Favorites and The Tablescaper for Seasonal Sundays. (for there isn't anything more seasonal than snow!) 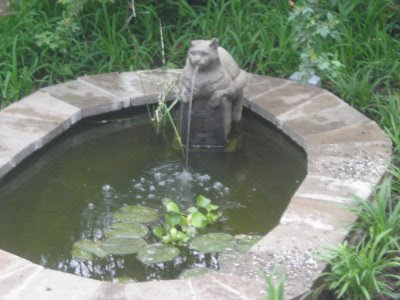 The pond in summer - with the cat fountain sprewing water and goldfish swimming below the surface . . . 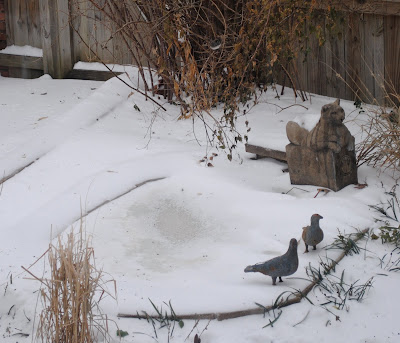 Transforms into frozen snow covered tundra. The goldfish are somewhere in the depths of the fountain. And the cat has been put out for the winter!

Quite a transformation from summer scene to winter scene!
And with the ice and snow covered ground, the birds have been flocking to the garden. Cardinals, juncos, chickadees, an occasional goldfinch and tufted titmouse. Herr Squirrel, too, has managed to get a meal or two. 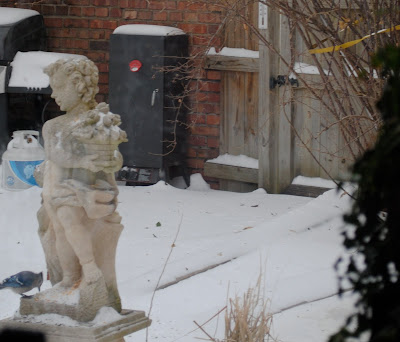 But a favorite of ours is the bluejay. This fellow is working hard for his sunflower morsel. 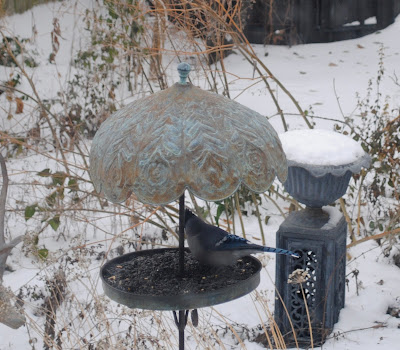 While at the feeder, a fat (and sassy) Jay is eating his fill. Although Jays can be raucous birds, they have a soft spot in my heart. My high school mascot was the Jay and so I've always held them dear. 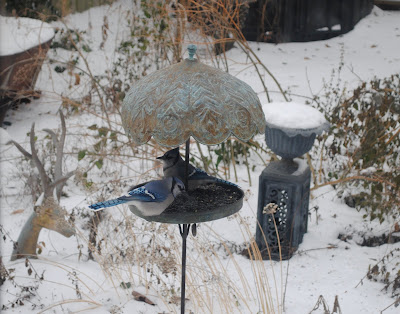 And what can be better than one Jay -- two Jays!
Summer or winter, I love to see the blues of the jays flit from tree to feeder and back again. Blue is always a favorite color in the garden -- whether it's feathers or petals!

Martha,
NO SNOW here, either! Just cold! "MR. Squirrel" has devoured many ears of corn this week and the birds can't seem to get enough to eat at the feeder...so...it's off to Lowe's tomorrow! Do wish we'd get some moisture! Have a great weekend!
Fondly,
Pat

I love watching birds especially in the winter. I guess they show up more in the landscape. Red cardinals and blue jays are abundant here. Love your winter photos!
Miss Bloomers

Ann from On Sutton Place said...

Thank you for sharing this again because in 2009 I didn't know that these blogs existed! We just got our first big snow fall yesterday. I'm sure some is coming your way before winter is over. Happy Sunday...

Love the contrasts of your photos. Wonderful to have you be a part of Seasonal Sundays.

What a beautiful backyard. I can imagine it in the summer. We had snow/ice last evening. We just stayed warm and cozy in the house and enjoyed it from afar.

I just love your cat fountain. Never saw any like that before. We have lots of snow to cover my gardens. I miss walking around them and seeing the outlines of the garden in winter. Have to wait till April to see them now!
Wishing you a good week,
Nancy @ Two Cottages And Tea

Always nice to share a favorite post from the past! Do you have snow yet? Love your kitty! :D :D

Amazing how a garden in winter can bring so much beauty.