Firstly, it's been a frustrating Sunday afternoon trying to get my post done.    Blogger has been playing tricks with my posting pictures.   I've uploaded and downloaded and everywhichway loaded . . . and there  is no rhyme nor reason  . . . but at least I'm finally done!


When we built the breakfast room, we used the space over the sliding glass doors as a place for our art.    We love birds and the gardens are full of birds and so on the north wall we hung 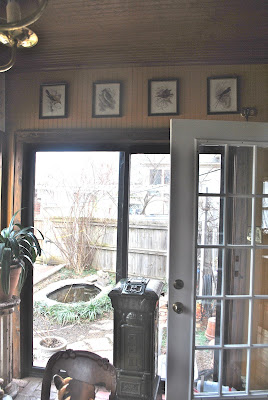 A set of four bird prints.    A buy at Nell Hills for $10 or so each.    Quite reasonable and they look old and we were quite happy with them!

Not originally, but after I had to reframe them, I moved my Mercy hand colored engravings to the breakfast room -- they were about food after all and although the room overlooked the garden, it was where we ate
all of our meals. 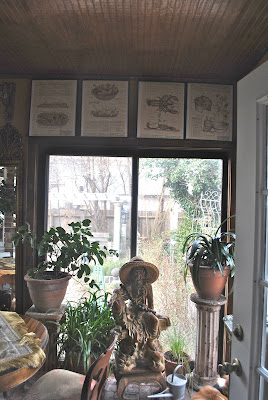 They're big and I hung all four of them over one of the doors.     They were nice there.   Nice.   Not "wow".   I, of course, longed for a big kitchen where I could hang them properly.     But that will never be at Linderhof and so they lived in happy obscurity above one of the doors to the sunroom.

And then, in reading blogs, I came across For the Love of A House and Color Outside the Lines and noticed there herbariums hung on the walls.    I fell in love . . . .and longed for some to hang at Linderhof.

Upstairs with my photo albums was this 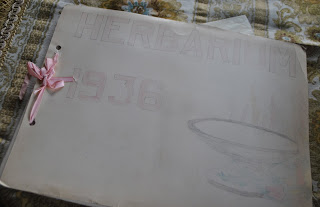 My Mother's Herbarium -- from 1936 when she was a mere 13.      Either she or her mother had saved it all those years and I found it among her things after she had passed away.    I had never seen it before.    But it must have meant a lot to her to have kept it all those years. 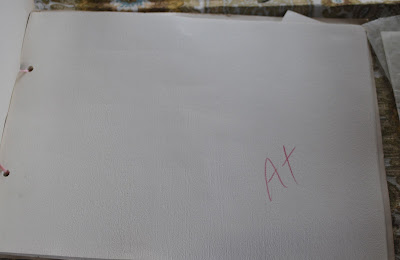 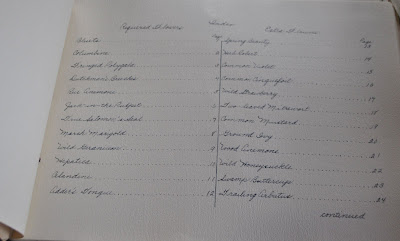 She even had an index! 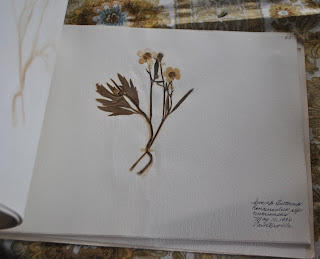 It was full of lovely pressed flowers.     And I put it away with the old albums and such.    For if she kept, then so should I.


So I had my "pictures" -- my "herbariums" to frame and hang in the breakfast room.
Hobby Lobby is always a great place for simple frames and I found the perfect frame for these treasured pictures.    Alas, I thought I needed nine because I had a "plan" but most stores only had 2 or 3 so after visiting 4 stores I had my nine! 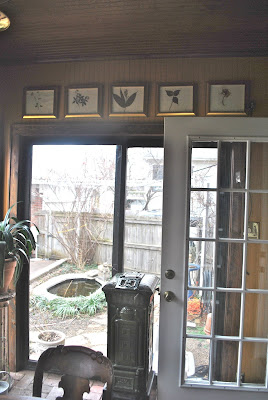 I must say that these five looked smashing over the "back" door!   Much better than the bird prints!
I kept the Mercy engravings there -- but hung each one over one of the doors -- two on this side of the room and the two other over the doors on the other side. 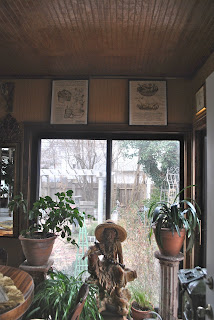 But they still didn't look "wow" especially after I had put up the herbariums over the other door.    So, I took them down, filled the other 4 frames with more herbariums and hung them in their place. 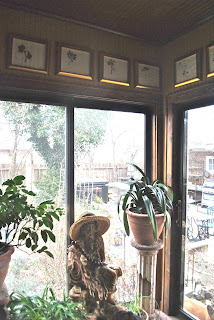 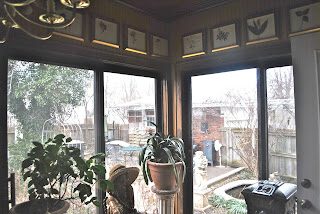 And I think the set of nine is a "good start".    I called Hobby Lobby for every store where I picked up one or two or three said that they could order more and they were half price that week and ordered 10 more -- to finish out the room.

It will be a week or more before I can collect them -- but I'm in no hurry for Mother's pressed plants have been hidden for 76 years and a few more weeks shouldn't matter much.

And the Mercy engravings?     They went back to the kitchen -- where I had them originally.    Why I moved them I'll never know.    But I did. 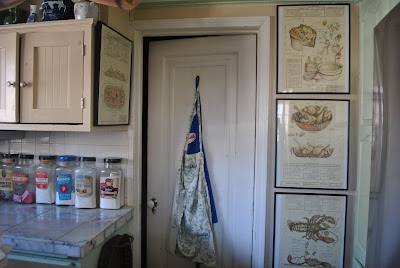 For I think the kitchen is absolutely the perfect place for these lovely hand colored engravings.

They've quite a story, these engravings, for they were done by an architect friend of ours.    They're an architectural rendering of food "construction" (as in how to construct a dish).     When he did a project at the Sisters of Mercy Convent here in our little town, as a thank you, he gave these engravings to them and for 30 years or more they hung in their dining room.     The remaining nuns "retired" to St. Louis and the contents of the convent were put up for sale.    I was fortunate enough to be the high bidder on these drawings (although at that time I knew none of the history of them) for $12 each.     Then, I found out the story when I called our friend and asked him about them.

The bird prints?    I'm going to sell those.    As I am a landscape print that I bought inexpensively (one of a pair -- the other is currently in the garage) in the city about 7 or 8 years ago.

A big thank you to Joan and Artie for sharing about their herbariums.    Mine would have stayed in the closet had you not posted about yours.     For that I sincerely thank you!

And I'm taking my "Moving Pictures" to join Susan at Between Naps On the Porch for Met Monday.

Martha, how wonderful to hang your Mom's work. I am sure everytime you look up you will be thinking of her.
So glad she got an A+ so they are worth to be hung in your beautiful home!

I do believe I am going to make a herbarium this spring. Thanks for the inspiration.

What an amazing journey your moving pictures have had. I really enjoyed the story.

I ALSO adore your brick flooring and wooden ceiling. I'd enjoy reading a post about them!

Weren't you so lucky to find your dear mother's lovely work and I love where you hang them too, it gives your home more warmth and with memories of her around to see everyday. I thought I was not your follower, although it would've not been a good idea, as I am a fan and friend of Linderhof! Have a nice week.
FABBY

I love this post.....I really enjoyed the story.

Inspired! Your mother did a beautiful job and it deserves to see the light of day and bring happiness to everyone who sees her work! Did you ever read Maud Hart Lovelace's semi-biographical Betsy-Tacy books about growning up in Minnesota in the 1890s? You reminded me of the book Heavens to Betsy in which she puts of her herbarium and puts it off and ends up trying to do a year's project in one night.

I agree - the WOW factor is there! There's something about the scale too, that is so much better than with either the bird or Mercy prints.
I'm glad to be able to comment again!

Pondy -- And I'm glad you can comment again too, dear friend!

Your mother's work is beautiful and I love how you have them displayed, Martha.

Oh how nice, Martha! They are such treasures since they belong to your mother. What a nice place to display them!...Christine

They look awesome. You mother really did an amazing job and now they're a treasure for you.

What a wonderful way to remember your mother and enjoy her beautiful work!

Martha,
WoW! I love how you placed your mother's art around the sun room @ Linderhof!!! The prints in the kitchen are stunning! Having an art gallery of pieces belonging to family makes the best art for viewing!
Fondly,
Pat

Your Mother's art project - what a treasure for you to have. I like the way you have them displayed.
Thanks for stopping by and nice comment.