I've always admired copper in the kitchen.    No one in my family ever had copper cookware but I'd seen it in kitchens in magazines and in cookbooks.

I decided early on that I'd like copper pots in the kitchen.

Early in married life (when we were very very poor), I bought a "set" of copper cookware from an advertisement in a magazine.    All for about $15.    It wasn't cooking quality but was for display only!

Not long after I decided that if I had copper cookware it was copper cookware to use and so in haunting flea markets and estate sales and even the markdown aisles at stores like TJ Maxx and Tuesday Morning, over the last 30 years or so, I've accumulated a nice "collection" of copper cookware.

Which is one reason that I have a pot rack in the kitchen! 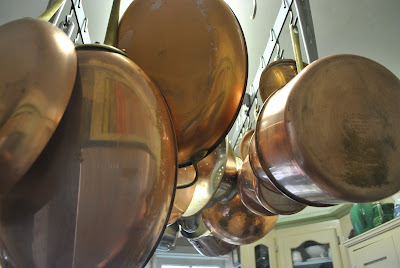 (The other reason is that a pot rack is really the only place to store cookware in my kitchen!!!)

I've got two criteria in buying copper cookware -- it has to be French made and it has to be really really inexpensive!

Which means that there are long periods of time where I didn't buy any copper cookware!    But I remember a "mother lode" of an Estate Sale at which I got two pieces and then the next day we went back and I got two more!     It was all good quality French copper and the prices were so reasonable . . . nothing over $20! 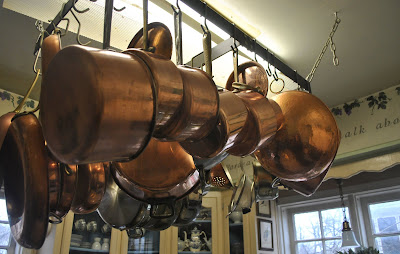 I spent Wednesday polishing the copper.   It's a chore I don't mind doing and I love the gleam when it's all freshly polished.   I prefer Wright's Copper Polish and copper, unlike silver, is a wipe on and it's shiny again kind of polish.

But my greatest treasure is this . . . 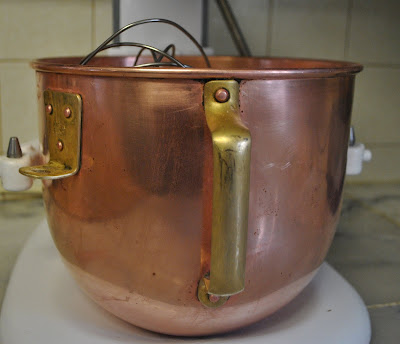 A copper mixing bowl for my Kitchen Aide.    I bought it from Bridge Kitchenware in New York.   I had found something on their site that I had been looking for (it may have been my coeur la creme molds -- the big ones -- my little ones I got at the same Estate Sale that I got all the copper cookware at!)    In with the order was a flyer and there was a copper mixing bowl.   It was about $15 more than a stainless steel one.

I thought it would be great for whipping egg whites and it would be nice to have a second bowl -- for sometimes you need another bowl and for some reason I hate to stop and wash a bowl just to reuse. 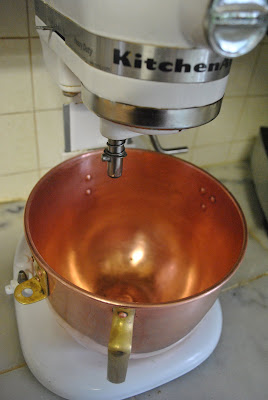 It's copper inside and out and yes, it does a very very good job with egg whites.    But it's the bowl I keep on the mixer stand and it's the bowl I use almost every time I use my mixer.

It's been almost 12 years since I bought the bowl and it's seen a lot of mixing in those 12 years.    It's a purchase I treasure and one that I never regret. 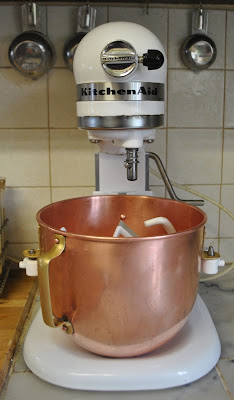 I think the mixer looks especially smashing with the copper bowl!

It's Friday and time for Show and Tell so I'm sharing my lovely copper with Cindy at My Romantic Home.
Posted by Martha at 9:30 PM

Your copper is gorgeous. I totally love it all. The mixing bowl is the greatest. I have never seen one. Love it. Hugs, Marty

I worked at Williams Sonoma a few years back and their employee discount was outstanding! So I have a complete set. There is no room in my house in Florida so they live in Maine displayed on a pot rack on the wall.

I have never seen the copper bowl for the Kitchen Aid but I do have the copper liner for the bowl which I use from time to time!

Have a great weekend!

Love love love the copper mixing bowel. I have not seen that before.
I do believe I must have one of those. I am almost afraid to visit the site you suggested to look it up. I can olny imagine the other *must haves* that will grace my eyes.

I have one copper pot that I got a thrift store for 1.00 It has something burned on I soaked and scrubbed and it came out so great.
cathy

Martha,
At Linderhof copper is NOT just another pretty face! Function and beauty combined! The copper pots and mixing bowl add such charm to your kitchen!
Fondly,
Pat

Love all your copper!
You have a beautiful collection.
That mixing bowl is fabulous!

Thanks for sharing your collection of copper with us.

Oh, it is so beautiful. I didn't even know they made a copper bowl for a mixer. Some things are just worth getting the best -- so much better than buying 5 of the cheap ones. And they do make a statement in your kitchen!

I thought I saw a copper bowl for the Kitchen Aid once but have never been able to find it again. I love your copper pots and the fact that, even though polished nicely, they look loved and used. I have only a copper bowl that is pretty much only used to beat egg whites and a copper jam pot that my elderly Hungarian friend gave me years ago.

Happy Valentine's Day to you and Jim!

Your copper is beautiful! I'm your newest follower-stop by for a visit!


Excellent .. Amazing .. I’ll bookmark your blog and take the feeds also…I’m happy to find so many useful info here in the post, we need work out more techniques in this regard, thanks for sharing.

I love that copper and brass Bridge-ware Bowl. I think you have a Unicorn. I been searching the internet for some time looking for one. It is stunning.