A Fool for an April Fool! 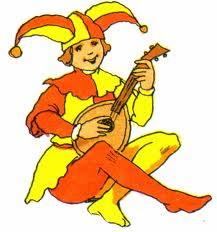 That's what today is -- April Fool's Day.    As a child, I thought it was a day for children to play tricks on each other and on adults -- who were always so gullible to any pranks or jokes pulled on April 1!

But it isn't really and reading on the internet, I've come across a few reasons as to why it's April Fool's  -- but nothing really as to why the pranks.

Without internet or cell phones or even television or newspapers, many people did not realize that the date of New Year had changed and those in the know called those who didn't "fools" -- on April 1!

I still enjoy playing pranks -- "your slip is showing" (but we don't wear slips any more do we?) or  "you have a tag out" (but so many articles of clothing have the tag on the outside) but there are other little tricks that we can still play on those near and dear and those who are not so much!

I thought of playing with my header today -- perhaps picturing a mansion instead of my dear little cottage but alas, time got the better of me and I came to my senses and decided that I would not "trick" my readers!

But instead, share what is the traditional April 1 dessert at Linderhof . . . 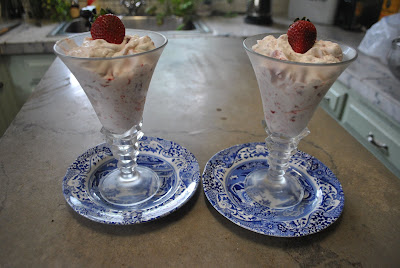 A fool!    Strawberry because neither gooseberries nor rhubarb are in the market here on April 1.    Strawberries do make a good fool but I like the tartness better of gooseberry or rhubarb!

They're easy to make and quite showy in a parfait glass.     And good to the last "lick" of the dish!     But what isn't good when it's made of cream and a bit of sugar and strawberries? 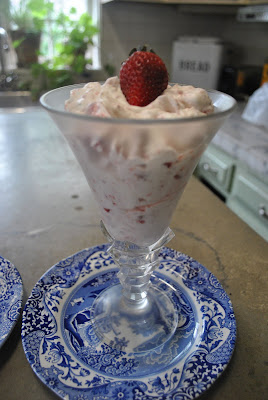 The recipe is simple and actually can be made with any fresh fruit you'd like although rhubarb, gooseberry and strawberry seem to be the fruit in most recipes I've found.    But I'm sure a blackberry fool would not be a bad thing!

Hull strawberries, then wash them and chop into 1/4 inch thick pieces.    Toss with half the sugar and wit 10 minutes, stirring occasionally, until they give up their juices.

Place half the strawberries and all the juice in a blender and puree.   Pour puree back in bowl with chopped strawberries.

Whip the cream with remaining sugar and vanilla until cream is stiff and holds peaks easily.    Fold berries and cream together and serve immediately or refrigerate for up to two hours.

NOTE:   I like to serve fools in parfait glasses for they are a pretty dessert.    For a strawberry fool, I always save enough strawberries to top each fool parfait with a fresh berry.   For other fools, I save enough of the pureed mixture to top the fool.

Your parfait looks so good right about now. Perfect for the ending of a wonderful day. I'm liking those blue dishes you have too.

What a great dessert to share on April Fool's Day! Lovely!

I find your "fool" preferable over being fooled! I guess we don't very much wear slips any more.

I like that dessert tradition...may have to start that for my kids! And I still wear slips if my skirt isn't lined...I don't like the sun shining through!!! =)