As a single career girl, I took a trip to the Bahamas in the late 60s.   My first and for a long time, my only trip outside of the United States.

In 1987, Husband Jim decided that we need to take a trip to England.   He had not been there -- and of course, neither had I.   So plans were made, tickets bought, car rented and off we went.

Our vacation took us to Dover and Jim had the brilliant idea that we need to go to Europe.    We did not have a Visa for France so that was out.   The Netherlands were too far.   That left Belgium.    So we bought tickets on a ferry and sailed for Zeebruges.     Once there, we got on a train which took us to Bruges. 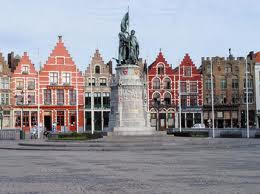 I was enchanted.   I adored  England then (and still do) but this European city was so different than the villages of England.

We spent the day, had a meal (and our first experience at trying to order off of a menu which was not printed in English (we ended up both getting fromage omelet because I knew that was a cheese omelet) and had a grand time visiting some second hand stores and antique shops.    Lace and chocolate shops as well for Belgium is known for both of those products.

Alas, the only thing we bought (other than food -- for we did buy chocolate but we ate it right then and there!)  was . . . 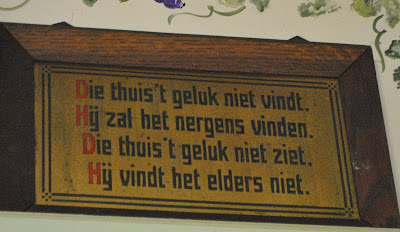 This plaque.    It is supposed to say something good about a house.   It must be in Flemish and we've never known what it said but it has always hung over the kitchen door at Linderhof.    It's a perfect fit and is our own remembrance of a memorable day and my very first day in a European city.

We did take the camera and took pictures -- lots of pictures but then something happened to the film (it was back in the days of film) and alas, our only memories of Bruges was the kitchen plaque . . . and our memories! 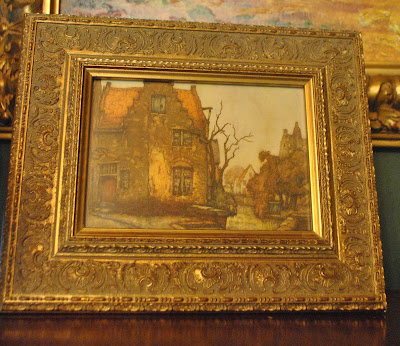 And then, one year as a gift, friend Jean from Memphis sent me this lovely picture.   Of Bruges.   I framed it and it's always been on a tabletop or shelf in the living room.    I adore the picture for it reminds me of a lovely day that we spent in Belgium.    My only picture of that beautiful place!

Last Wednesday at one of my new favorite shop, Dappers, in the little town 30 miles south of us, I found
. . . 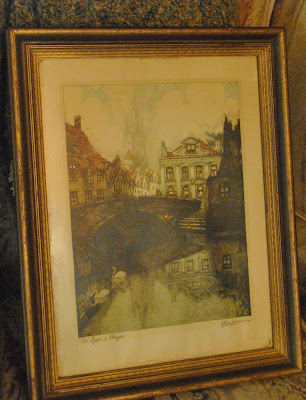 This lovely picture of Bruges.     And it came home with me.    Our main bath has more wall space than most rooms of the house and we have the walls filled with watercolors and oils and etchings and engravings of places that we've been -- most were purchased over there and brought home with us.

It makes me smile, to see the places we've been as I get ready for the day -- and although the walls are almost full I did have room for one more!      And we don't have a remembrance of Bruges so it was perfect!

But the best thing is the back of the picture . . . 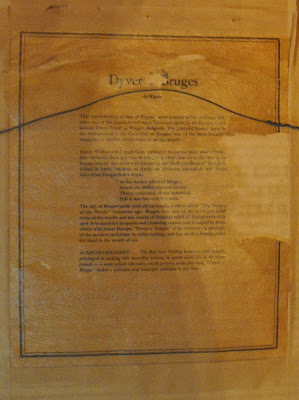 Most of it is in tact.   It is a copy but it is a signed and numbered copy.   It was made for the customers of The Red Star Milling Company.        It doesn't say if it was a "freebie" or something that the customers had to purchase. 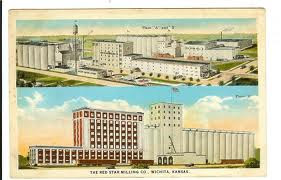 What's interesting is that Red Star is a Kansas company.    It's headquarters were in Wichita (which is about 3 hours west of us).   A very successful mill!   (And you have to love the internet -- for all kinds of information is at your fingertips!)

But the most interesting thing about the Red Star Milling Company is not that they reproduced that watercolor for customers (although I still don't know the date that it was done) but that it played a roll in something much bigger.

For in 1928, it became one of a group of mills which included Washburn, Crosby and Company (and all mills constructed or purchased by them) as well as the Royal Milling Company, Kalispell Flour Mills Company and the Rocky Mountain Elevator Company.

The name of the new company?

You've probably heard of it!!! 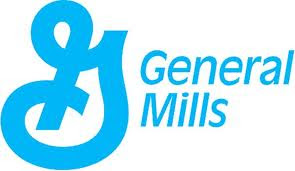 And recognize their newer logo!

What's most interesting, to me, however, is that daughter Sarah works for General Mills and one of the original mills of the company is Red Star Milling Company and a picture that was made for their customers now hangs in the bathroom at Linderhof!     Isn't that terrific!

How interesting! My hubby went to Bruges a few times as the company had car plants there. Stefan actually came here once and we took him to Roaring River, Jolly Mill, Branson...lots of fun. I have a lovely lace book mark from Bruges. Have you seen the movie by this name...thriller but the sites of the city are the real interest.

Dappers? Sounds like it might be in Pittsburg but I don't recognize the store name. Further south maybe?

Love all the links there!

Sounds like a photo couldn't do your memories justice. What a great experience for you.

Calypso In The Country said...

What a great story! I have traveled to Europe a couple times but have never been to Bruges.
-Shelley

What an interesting post--and love that you have all those memories on the wall. I wonder what life would be like if we did not remember the past -- we wouldn't be quite whole, would we. Also like your new butler's table! Now you just need a butler--maybe the one from Downton could visit! :-)

On both of my trips to Great Britain, I didn't even take a camera!! I hated taking time away from looking at things to focus a photograph. I've since learned that those photographs are wonderful ways to relive trips over and over. Of course, cameras used to be less user friendly as far as I was concerned. I never leave home without my camera these days but try to not let my photography overshadow my having a good time or feel that I'm intruding on my fellow travelers, diners, etc.

I saw your Flemish plaque, and researcher than I am, I could not leave it alone. I sent the words to my former h.s. classmate who lived in Belgium for years and thought you would enjoy the translation.

"Who doesn't find happiness at home, won't find it anywhere.

Who doesn't see happiness at home, won't see it anywhere."

Enjoy your beautiful plaque. It is precious. Susan