Tea and Blue Tea for Two

It's tea time at Linderhof.    But it's a very special tea time . . . for I'm having a "cyber tea" with blog friend Sarah from Biloxi.     She's a dear and sent me several recipes which I received today.    One of which I just had to try!    And since it is her recipe, what better guest to "share" the cookies with than Sarah! 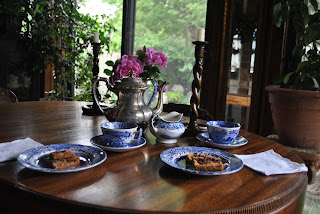 Tea for two in the breakfast room, of course.     With the Spode Blue Italian cups and saucers and plates, the odd blue and white creamer and my grandmother's silver pot. 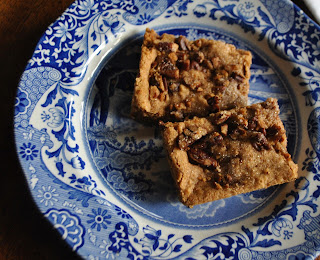 They're an easy cooky to put together and if you like shortbread they're a really good cooky.    Crisp, buttery and loaded with cinnamon and pecans.

I baked them while I worked in the garden this morning and the smell of cinnamon in the oven wafted out to the garden!    It was a heavenly smell. 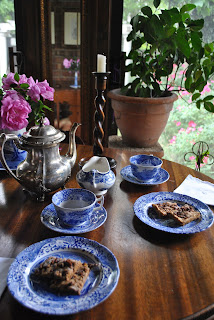 I am so glad Sarah could join me for tea today and enjoy my version of her tea treats!

Heat oven to 300.   Mix flour, cinnamon and baking powder and salt together in a small bowl.    Cream butter and sugars for about a minute until fluffy.    Stir in flour mixture, then beat until fluffy again.    Press dough into an ungreased square pan and use a fork to prick holes all over.    Mix pecans, sugar and cinnamon to make topping.    Sprinkle on top of dough.    Bake about 55 minutes, or until shortbread is firm to the touch.    Cut into bars while still hot, but let cool before removing from pan.

It's Friday and I'm sharing my tea with Sarah (and her cinnamon pecan sprinkled shortbread) with Michael at Designs by Gollum for Foodie Friday.
Posted by Martha at 6:15 PM

What a treat it would be to sit in your cool and serene room at that lovely table. I could use a lovely, quiet cup of tea and a sweet right about now. Beam me up!

As always, your blog is theraputic! This is rough week here with worst yet to come for two days, so these few lovely minutes at your table have been heavenly for me!

I do love shortbread. Most dessert recipes are out of our reach as they have too much sugar/carbs. I am sure this recipe has carbs in the flour, fat in the butter, but so little sugar! I will try as soon as possible. Oh,they look JUST right for tea!

I have a load of questions for you today but will limit myself. Have you tried Tusli tea, no caffeine and not real tea. Supposed to have lots of health benefits.

I wonder if you grow your own mint? Do you use mint with your tea? I love the smell of mint on my hands more than in my tea. I have some chocolate mint already this year and I just bought a Mint Julep mint that is spearmint but a brand that is know for making best mint juleps I guess...not that I do.

One more for today...have you seen or do you plant Mexican petunias. They are all over St. Louis but not down this way that I can find. We are meeting our freinds half way on I44for lunch and a load of Mexican petunias in May.

Way more than you needed to read...have a good weekend ahead.

Anything with cinnamon is fine with me. Martha..have you tried lemon balm in your herbal tea? My favorite is chamomile tea with a little honey and some lemon balm leaves. Boy would that taste good with these shortbread cookies. Yum. Hugs, Deb

Deb -- I adore lemon balm and it is in the garden at Linderhof.

I've not heard of that tea. My breakfast tea is PG Tipps and my favorite afternoon tea is Earl Grey -- I don't drink much green either. I like REAL tea!!!

I do grow mint -- the variety I prefer is Kentucky Colonel -- the mint julep mint that smells like mint! I've had chocolate mint and pineapple mint at different times but prefer the plain mint mint!

I've heard of Mexican petunias but I've not seen them here but I also have not looked for them. I'm going to a garden center tomorrow and I may ask about them.

Enjoy your trip with friends and you'll have to fill me in more on the Mexican petunias!

Your blue and white looks gorgeous with the touches of pink!
I set a little bit of blue and white out this week too!
Thanks for the great shortbread recipe. They look scrumptious!

Those cookies sound good, I love anything with cinnamon.

Oh how I love shortbread! Just last evening, I was looking at a shortbread recipe that I picked up from the arts center back in January, and they forgot to say how much butter to use and I don't want to guess. Thanks for sharing your recipe. Visiting from Foodie Friday.

Martha,
What a lovely gesture to one who has been so thoughtful to share recipes with you! This shortbread cookie looks delicious!
Fondly,
Pat

Me And My Sweets said...

YUMMIE! It sounds amazing, I love shortbread!!! I found you on Foodie Friday. I'm going to start a monthly party myself and I would love you to join. Visit my blog from 1st of May for more info.