Paper not Plastic -- Memories of My Grandfather 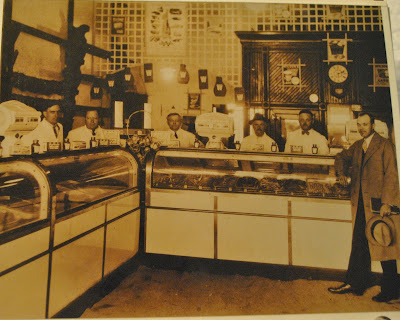 Grandfather was a butcher -- both he and his brother and they were business owners but they didn't own a "butcher shop" but rather a "meat market" in Higginsville, Missouri.    Brother William stayed in Higginsville while grandfather moved first to Chicago, then to St. Joseph and finally to Kansas City, Missouri.    He would sometimes come back to Higginsville and work in the Meinsen Meat Market.

From the Higginsville newspaper:

There are several reasons why the people of Higginsville should patronize and buy their meats at the Meinsen Meat Market, but the most important of all is the fact that all the meat used and sold is bought on the hoof from the stock raisers in this section of the country and butchered in Mr. Meinsen's own slaughterhouse, thereby insuring the public of only the best quality of meats.


Nothing but the choices beeves are ever killed, only the fattest and healthiest hogs are ever butchered and nothing but the tenderest lambs and calves killed, for Mr. Meinsen is always very careful and particular to have only the very best quality of meats for his patrons and customers.


He makes all his own sausage, hamburger, and veal loaf, fresh every day, and insists that good clean meat and choice pieces of fat be used so as to make the sausage and hamburger, a most palatable dish and to make it one of the most nourishing foods that build up muscle, health and vitality.


Real hickory smoked bacon, smoked in his own smoke house, has a most delicate flavor and is considered by the house wires of Higginsville as bacon without peer.


These standards of serving pure meats and pure lard have been the foundation and backbone of the business that was established thirteen years ago and combined with excellent service make the Meinsen Meat Market one of the most popular shops, as well as the largest of its kind, in Higginsville.


The fixtures of this place are all modern and a large ice box holds a number of beeves and hogs at the same time.    Mr. Meinsen's son Chris Meinsen is connected with the business and Mr. Meinsen has another shop in Kansas City, located at 1513 East 18th Street that is run by another son.


Mr. Meinsen is a genial, good hatred man of progressive ideas and business methods who is prominent among the public spirited citizens who are always ready to help further any cause or movement that will be good and benefit of Higginsville and the community in general.


Grandfather died the year before I was born, but his legacy of good meat remained in our family.

Even the grocery stores had butchers and their meat arrived not in cardboard boxes but by the side.

My father dealt with meat markets and grocery stores in his business and often would arrive home with a prime cut of meat that mother would fix for dinner.

Alas, all of that has changed and although in some areas of the country there are butcher shops and meat markets, in my town on the prairie that isn't so.

Beck & Hill Meat Market.    An old fashioned meat market although I'm not sure who Mr. Beck or Mr. Hill were nor if they or their children are still associated with the business.

But whenever we find ourselves in that little town, we always make it a stop! 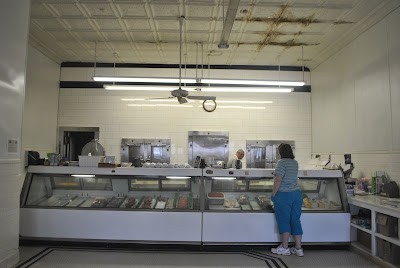 Inside little has changed over the years and if you compare this picture to the one of my grandfather's meat market, you'll notice a lot of similarities.    Not as many butcher's -- just one and sometimes two to handle the orders and cut and trim steaks and roasts and chops to order. 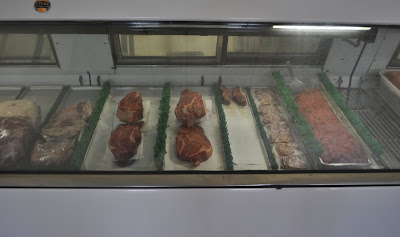 And in the even littler town which abuts the other town, there is another gem . . .

Pallucca and Sons.   It's changed from a market with a wonderful meat counter to just a meat market and deli.   A victim of the supermarkets in the bigger "next door" town.   Pallucca's been there "forever". 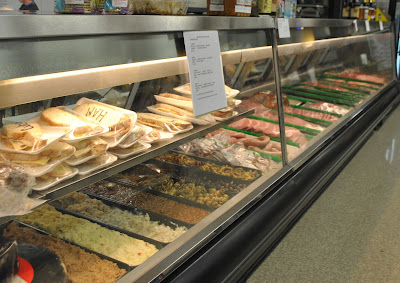 It's an Italian community and many of the selections in the meat case cater to their Italian clientele. 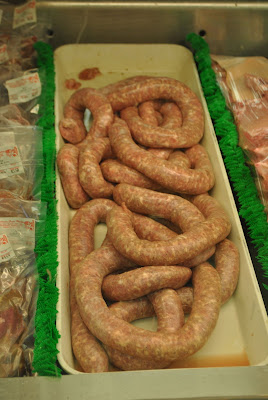 As a reminder of my grandfather and his meat market, I have meat hooks on my pot rack in the kitchen. 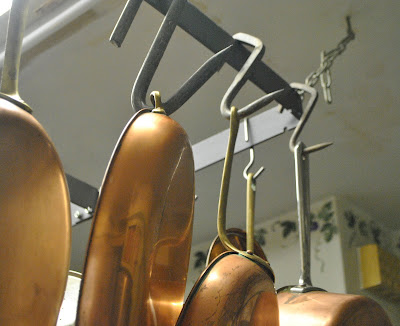 They're great to hang pots from! 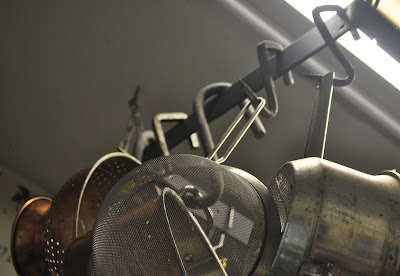 One is even engraved "Armour" -- a company which my father did business with.    I love these reminders of both of my father and grandfather in the kitchen.

There is an end to the story . . . The family Meat Market in Higginsville 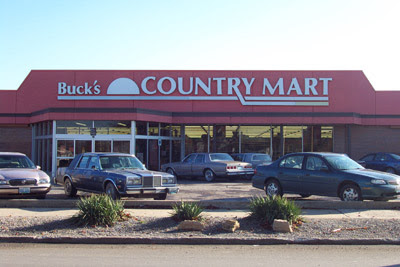 Now looks like this.   Not owned or run by a family member but instead by the Buck family for in 1929, a Henry Buck moved to Higginsville from his family farm in Concordia and began work at Meinsen's Meat Market (perhaps he is in the first picture above!)

In 1931, William sold his meat market to the Hoffman family but Henry Buck continued to work there for the Hoffman's.

In 1937, Henry Buck purchased the Hoffman's Market and had plans to convert it into a grocery and meat business instead of just a meat market.

The business continued in it's location at 21st and Main until 1959 when it was relocated to a new facility at 16th nd Main and became Higginsville's first modern supermarket!

And even though the family sold the business a long time ago and the present location was never the location of our business, it is nice to know that the current supermarket in Higginsville had it's origins in my family's meat market!

What a great story. So nice to have your family's history documented so well. Meat markets are a treat. We are lucky to have two in our town and others nearby. Using the meat hooks in your kitchen is a great idea.

Thasnk you for sharing such wonderful story from your grandpa. People in those days were so driven, now most want things to come easily or by the government. Wow, I love this all American storie. Happy Easter.
FABBY

Enjoyed your family business story... It would be great if our small towns could go back to real food and real businesses... I looked up Pallucca and Sons. and they are having their 100 anniversary this year.

That was an interesting combination of family history and food lore, Martha.
We are lucky enough to have a real, old-fashioned meat market and butcher nearby. There is nothing like a fresh roast - and I'm always asked if I'd like 'a little more fat for the top'. Makes for a delicious dinner!

When I was first married and knew nothng of the cuts of meats I would go to our little corner meat market ask about diffrent cuts for diffrent recipes. I learned a lot from that butcher. It is a bit scary what is bing sold for meat today.
Cathy

So enjoyed hearing about your family. I just love an old fashion meat market...the meat seems so much better and they know what I want when I ask for a swiss steak!

Once again we have a similar thread in our lives. My grandfather was not a butcher, but a Cudahy meat salesman. I spent a lot of time with him in meat markets talking with butchers. The white hats and white aprons, the sawdust on the floor, the freshness of red meat....I have not been in Beck and Hill market but I know where that sign is. I have been in Pallucca's...yum.

The article of your family meat market was interesting...the wording shows the era. They talked openly about the "kills". I don't think they would do this today. We don't think about where our meat comes from these days...very interesting blog today all around.

What a fabulous family history you have :o)

Love the history about your family! Growing up, there was a small grocer across the road from our country church. They sold all sorts of German meats...sausages, wursts. My dad always bought something fresh to take home for breakfast. I need to foster those kinds of memories with my kids...maybe at McGonigle's...do you know of any other good places in KC?