The Louisburg Cider Mill in Louisburg, Kansas.    For we needed a plan for my "Cooking With Herbs" class to be held  there on Saturday the 21st.      Beverly and I came up with a wonderful menu of foods that I'll demonstrate and class attendees will get to sample:

For after which I made plans with Michelle  from A Haus To Call Home to meet her at a favorite restaurant of mine . . .


Andre's -- not the original Plaza eatery but the 119th Street restaurant.      We've been emailing back and forth for a while now.     We're kindred spirits, we found, and living so close we just had to meet.    She's a Kansan (and my roots run deep in Kansas), she's of German descent (as am I), and we have similar tastes.   (I have the same tulipiere as she does as well as the same 5 finger vase!)    And I adore her blog.    I'm not sure who found who first, but upon my first read of her blog, she immediately was listed as a "Friend of Linderhof"for I looked forward to each of her posts.

Andres was wonderful, as always . . . it's a two course prix fixe luncheon and there are always two choices of entrees plus a quiche. 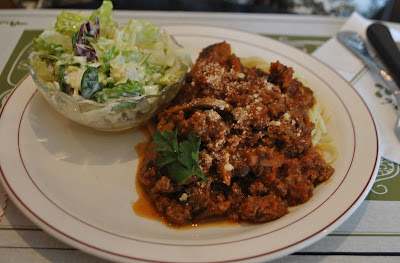 Michelle chose the pasta with a salad.    While I chose 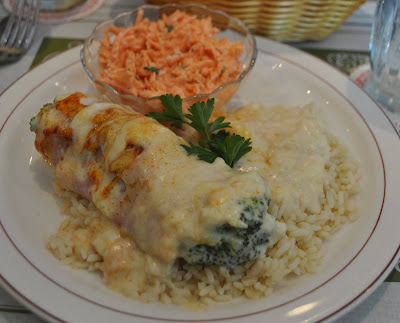 Broccoli rolled up inside a ham slice and all topped with a white wine sauce! 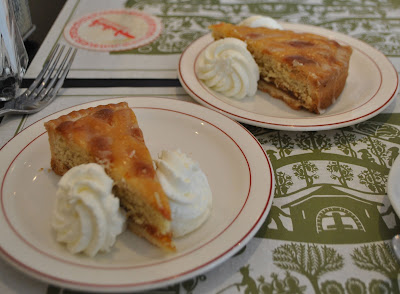 We both got the almond raspberry tart (kindred spirits, remember!)

We chatted as we sipped coffee an I noticed that there weren't many people left except us.    We both looked at our watch and found 2 1/2 hours had passed!   It was really a microsecond!    Really!

We stopped by the pastry counter -- to buy some pastries to take home to patient husbands (and in her case, children) and also a bottle of their wonderful salad dressing (the only salad dressing I'll buy)

She's coming to the my herb class on the 21st and after we're going to Beethoven's in Paola!   I can't wait!

b - to take a picture of the pastry counter for it was too much trying to decide which pastry I wanted to bring home!   (and thanks again to Kansas Travel for the picture)

c - to hand the camera to someone else so that they could take a picture of Michelle and I!!!!    (But we were chatting and paying and pointing to pastries and getting bottles of salad dressing and realized that everyone was still in place because of us -- it was past closing time!)

It is always nice to meet another blogger -- especially one who lives so close.     And it won't be our only meeting either!     I really can't wait to have tea at her house (and yes, she's already invited me!)

On the way home, I made a stop about 20 miles before I got home 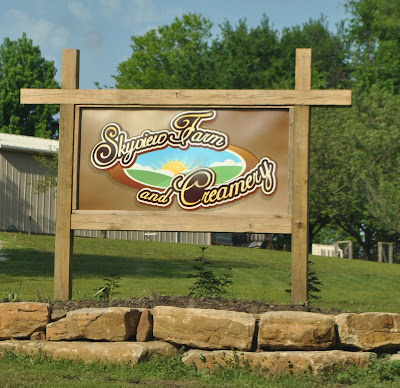 At the Skyview Farm and Creamery.     A cheese and milk farm. 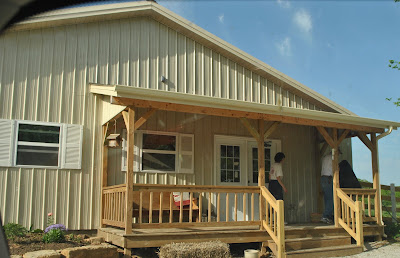 The creamery where cheese is both made and purchased 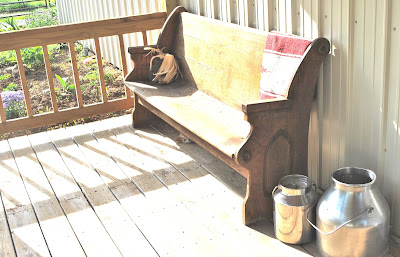 With a kitten on the front porch under the bench taking a nap.    Cats should be around where there are cows and goats.    They just belong together. 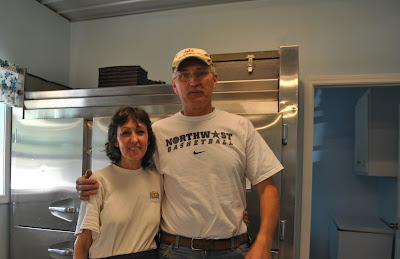 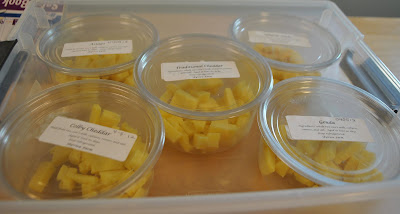 Samples of their wonderful farm made cheese.      It was hard to chose 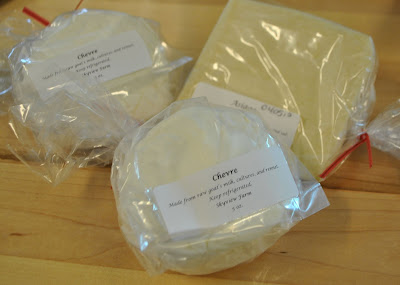 But I got two Chèvre, which is the most amazing Chèvre that I've ever tasted, and a slice of Asagio.   One Chèvre and the Asagio is for a dinner party we're giving on Friday (along with a wedge of Maytag bleu).   The other Chèvre was eaten for dinner tonight -- sprinkled with sea salt and chives and slathered on a baguette.    There is some, but not much left -- it is that good!


We're so lucky to have not only organic cheese of that quality so near but also they sell milk and cream!

On the drive home, I remembered Sundays as a child when we all piled into the car after Sunday dinner  for a ride in the country.    Sometimes we had a destination (like visiting a relative in a nearby town) but most often we didn't.    And as we drove we always looked for signs in the farmyards advertising "eggs" or "fresh eggs" for sale.     A dozen for us and a dozen for grandmother came home with us.     They always asked if there was any cream for sale.    It was a banner Sunday when there was!

It's Wednesday and I'm joining Susan at A Southern Daydreamer for Outdoor Wednesday.
Posted by Martha at 8:56 PM

O what a day of enjoying glorious food! I would especially love the cheeses and exploring the varieties!

Martha,
Although it was our first time meeting in person, it felt like getting together with an old and dear friend! What a treat getting together for lunch today! We had so many things to talk about and I so look forward to your "Cooking With Herbs" class later this month and then to Beethoven's! And those cheeses you took home sound terrific btw! xo, Michelle

It really does sound like a great day, Martha! Food and friendship just go together.

I love getting inspired from your blog. The cooking classes sound wonderful .. too bad I'm so far from Kansas.

So many yummy things from so many great people!