The Harry who was born 118 years ago today is "hometown boy" and 33rd President of the United States -- Harry S. Truman. 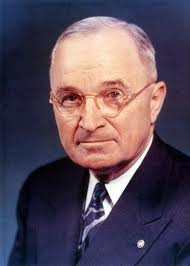 Growing up in Kansas City, Harry was often interviewed on the local television channels -- and I remember he always joked about running for his "second" term years in the future.    For he was the one who had legislation passed that a President can only be "elected" twice (and since his first term was because of the death of President Roosevelt and his "second" term was really his first elected term . . . )

And although he is The Man from Independence, Independence is really a suburb of Kansas City and his library is there.     A fond memory of childhood is a class trip to that library, right after they opened, and being led through the library by a knowledgable docent and then at the end being seated in the auditorium where President Truman came out and addressed the audience.    We were lucky little kids that day for he had been asked to address a group of high schoolers but since we were there and there was room in the auditorium . . . . it was a memorable day for me and one that I will always remember.

Harry, too, was a contemporary of my father and before Harry was famous by father knew him.   Although it was more of an acquaintance rather than a friendship.     And Dad (and mom, too) voted for Harry for President -- for he was the hometown boy!

When he left office, he called himself "Mr. Citizen" and often you would see Bess and Harry at the grocery store -- like normal folks.    This was before the assassination of President Kennedy when former Presidents had no secret service protection.    Can you imagine today seeing a former President and his wife in a supermarket? 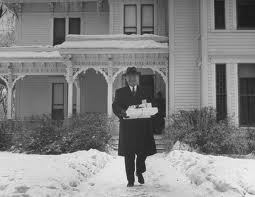 In Independence, was the summer White House -- the home that Bess's family built that was the only home that Harry and Bess ever knew (oh, they had an apartment in Washington when he was a Senator and he lived in the White House and he spent time in Key West -- but their home was in Independence -- the others didn't really count)

It's a Victorian home and a real homey home.   It's now a National Historic Site and you can tour the home which is left as it was when Harry lived in the home.    Bess made sure of that.     It's one of my favorite homes to tour and I simply adore their little library.    With walls of books and two comfy chairs!

Truman's Birthday has always been remembered by me because for many years I worked for the State of Missouri and to honor their hometown boy who happened to be a President, they designated his birthday as a State Holiday.    It was glorious to be out and about on that day (especially when we moved to Kansas) and people would ask "why are you off" -- and I told them because it was Truman's Birthday!
Often I just got stares!    But since I was off and since his birthday fell past the day of the last frost, it was also the day that I took out all my houseplants!

I've fond memories of President Truman for many reasons!     A Happy Birthday to a great man!
Posted by Martha at 9:58 AM

Great post.
Martha, I have two stories that might amuse you.
First, once my mother was coming out of Emery Bird Thayer's in a blinding snow storm, and ran right into a man. They both apologized and went on their way. It was a moment later when she realized it was former President Truman!
The other time was when my grandmother was visiting us. Mama asked if she wanted to take a drive. She agreed, so we all got in the car and Mama drove to Independence. She stopped by the side of a house, asked Grandma to get out. She did. Mama said, "Here, Mama, touch this fence." She looked puzzled, but did. She asked, "Why?"
Mama said, "It's the Truman's house." Grandma jumped back as if she had been burned - She was a life-long Republican! We all laughed - all the way back to Kansas City!

Thanks for sharing two great stories about HST -- he was a very accessible former president.

FIRST - I LOVE YOUR NEW LINDERHOF PHOTO FOR THE HEADER! Very lush and green there! I also loved reading Priscilla's comments. Thanks for the history lesson.

Years ago I did tour his summer White House in Independence. I remember thinking how very accessible it was, not at all like how our presidents have to live today. I remember loving the down hominess of the home, thank you for bringing up that sweet memory.

I have enjoyed reading about President Truman through the years. He was a good president and a good man. He and Bess were a truly devoted couple.

Thanks for sharing your observations.

I learned a few new things from this post. While President Truman was before my memory of presidents, I have always understood him to have been a good, honest president and one who had the good of the nation (and the world!) at heart.

Happy Birthday, President Truman! We wish we had more statesmen like you. Martha, thank you for this post on a subject close to my heart.

I learned a lot of new info about Harry! Fun.

Although I'm familiar with his name I don't remember his Presidency as I was only a little girl at the time. He sounds a nice down-to-earth kind of man though, it was interesting to learn more about him.

What a neat post! Loved Priscilla's comment and your memory, Martha, of seeing President Truman speak at the library! We still need to tour his home, but have driven by and it's pretty. We've been in the presidential library a couple of times and my favorite room is the reproduction Oval Office, with curtains and furnishings from Truman's time in office. The first time we visited, their was a traveling miniature White House that was incredible to see.

As a kid, I always thought it was special that I shared a birthday with the president!! What an interesting article!!