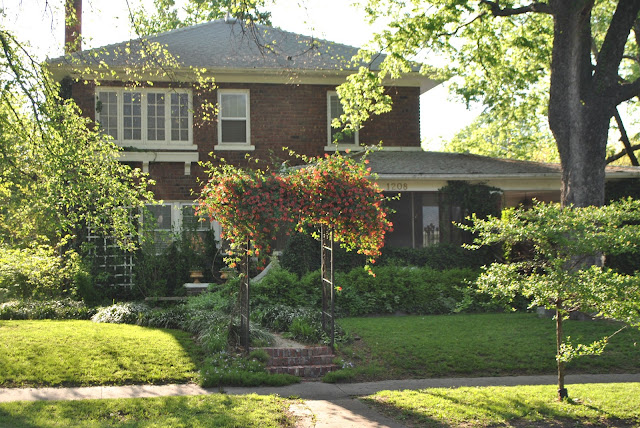 Today is an anniversary -- the 4th anniversary of Lines from Linderhof -- the blog edition (for there's been a newspaper edition since 1997).

I had visited a few blogs -- my first was Pat at Back Porch Musings.   Her photographs were amazing and I cannot remember how I first stumbled upon her blog, but stumble I did and I was smitten.   I still am.   For I always look forward to new posts from Pat.

Somehow, too, I found Mrs. Blandings -- and because she blogged from close to where I used to live, Patricia became a regular read in the morning.

And then I took the plunge.   I found bloodspot and followed directions.   No one told me how to do it or what to do (although I have asked Mrs. B occasionally for advice or help and she did take me under her wing when I first started.)   I just figured it out for myself including downloading and posting pictures.

My camera at that time was a Nikon point and shoot.   A simple camera.   And inside, I always used the flash until somewhere, somehow, I discovered that one really shouldn't -- that pictures were better without the flash.

But the comments finally came as did more views.   More and more of each as time went on.

Readers who came and commented regularly.

readers who emailed instead of commenting so that we had a real conversation.


Maggie from My Life in Normandy in England last spring, Cass from That Old House in Connecticut last fall, Mrs. B, of course, in the city (actually at Ina Garten's book signing about which we both posted), Pat from On Crooked Creek, Michelle from A Haus To Call Home,  Bernideen from Bernideen's Tea Time Blog, (in a Hardee's off of I-70 in Kansas City!), Nancy from Acorn Cottage and Carrie from The Art and Flair of Being Domestic, both came to my Garden Tour -- Nancy had planned on coming for the tour but Carrie's visit was a surprise!

I've grown and Lines from Linderhof has grown over the years.   The pictures that accompany the stories have improved -- I look at those first pictures and feel that they look so amateurish.   A better camera (a Digital SLR Nikon D3000) and iPhoto has certainly helped with the quality of the photos at Lines from Linderhof.

And we're now a dot com.   My IT educated son-in-law was so impressed with my blog that I had done all by myself that he bought me a dot com -- linesfromlinderhof.com and I moved from my bloodspot address.

Lines from Linderhof still is a blog about life in a small town on the prairie of Southeastern Kansas.   What we do in the garden, changes that we make in the house (even it if it just rearranging a tabletop) and the food that we eat.


I enjoy my home.   I enjoy my garden.   I especially enjoy my kitchen.   Husband Jim and I enjoy sharing the home, the garden and our table with friends.

I like to think that each and every reader, whether they comment or not, and many don't, enjoys Linderhof as much as we do.   And all are my friends.

Two important things on my sidebar -- the 452 followers that I have.   You mean a lot to me.    And The Friends of Linderhof -- those are the blogs I read first thing in the morning.

Thanks to each and every one of you who visits Linderhof whether daily or weekly and a special thanks to those who leave comments -- you always make me smile!

To see how things have changed, I thought the picture for today's post needed to be of Linderhof 2012 -- the boxwoods are much bigger, the liarope has filled in so that the sidewalk is completely lined and the honeysuckle has not only grown over the front arbor but is really thick.

But the old house is really the same!

As a thank you to those who visit Linderhof, I have a box of one of my favorite teas, Harney's Hot Cinnamon -- it's great for cold weather but it's even better when one bag is added to two family size bags of Luizianne when you brew your iced tea.

I'll draw on the 9th because four years agao, that was the date that I got over 20 comments on a post!

Congratulations.
Yours is one of the first blogs I subscribed to. I enjoy it so much. Thank you, and here's to many more years.

Congratulations! So much to celebrate.

Congratulations! So glad to have found your blog and be on your friends list. I so enjoy our little visits! You do a great job. Looking forward to many more posts.

Congratulations on your blog anniversary! Always a lovely read. Lx

What a lot of pleasure your blog gives to so many! Congratulations!

Congratulations! You deserve a medal for doing all those posts, I've been blogging for nearly 5 years now and have still only written 316 posts!

Martha,
I'm so pleased that I took the steps when new to blogging to leave you a comment and later to correspond and finally meet in person. Only you can truly know how dear Linderhof is to my heart!!! I check yours first on my list of blogs...you, dear friend, have been my most loyal and constant supporter...thank you for your continuing Blog Friendship! Happy Anniversary! It is my wish that you never tire of blogging! What an inspiration and a joy you are to all who visit Lines From Linderhof! My best to Husband Jim & Ollie, too!
Fondly,
Pat

Isn't blogging amazing? who knew where it would lead us all and the friendships that would form! Congratulations on four years of blogging. I always enjoy your blog!

Linderhof looks beautiful anytime of year but especially in the Spring. Your William Baffin rose is stunning and so very full. Congratulations on you fourth blogging anniversary.

Congratulations! This is one of my favourite blogs and I hope you'll keep writing it for a long time yet!

HAPPY ANNIVERSARY TO LINDERHOF AND MARTHA! I so enjoy all your posts!

Happy Anniversary Martha. I have been reading your blog for a very long time. There are two blogs which I open each morning when sipping tea, one is Between Naps on the Porch and you are the other.
I have also used many of your recipes.
May Linderhof continue to flourish for a long time.

Congratulations, Martha! I love reading your blog and read it every day when we were in Paris last month and it made me feel at home. And I have enjoyed "meeting" your other blogging "friends" through your blog as well.

I'm so happy to hear about the history of Lines from Linderhof. I always enjoy keeping up with what's going on in your part of the prairie!

Hi Martha, You have done a great job - I look forward to the next four years of Lines from Linderhof. I so enjoy hearing about your cooking, tablescaping, and tea and of course seeing your lovely photos. Also enjoyed hearing about your trip to England last year. I would love to enter your giveaway. Have a good wknd, and congratulations!
Beth

Martha, I can't tell you how much I have enjoyed reading your blog over the years! I don't remember how I found you, but I felt like I have come upon a treasure. Then I left a few comments and then you commented on my blog and I was thrilled! Thank you for sharing your lovely home and life. I felt like we were neighbors when I read your posts about cooking and gardening. I also love all the posts about your trips, especially England! Have a wonderful day! (And my husband thanks you for the wonderful recipes from your blog that I have tried out over the years!)

Happy Anniversary! I love your blog -- I don't always get a chance to visit - but when I do -- it's like a breathe of fresh air...always something so fun to see/read about!!

Martha, Congratulations! Well deserved, I enjoy your blog and your recipies. I expecially love your apple cake. I have made it several time. I have it in my computer as "Martha's Apple Cake".
I wish I could publish more posts but I am so slow, I just can't do it.
I am looking forward to the next 1,000 and more.
Blessings, Ginger

Congratulations. A native Kansan myself, I was born in Hutchinson, and have lived in Sterling and Norton...so it is always a delight to keep on finger in the beautiful "pie" I still call "home".

Congratulations Martha! Not only is your blog a true delight to read, but it is so informative! I have learned so much about different plants, recipes, accoutrements to use when entertaining...you are a bit like another Martha S we all affectionately know (Stewart, that is!) =) After a busy weekend hosting 19 people, yours is the first blog I visited this morning to relax...and I haven't even made my coffee yet!!!
All the best to you,
Michelle

Congratulations! and I hope you have lots more years of blogs to bless our days!
J

You have been one of my favorites since the beginning for when I visit your blog, I feel I am stepping into a real home. I would not hesitate for a minute to try one of the wonderful recipes you publish since I know you are a real cook and your cooking style is very similar to mine. Nothing too fancy, just good food.

I know photos are a real hassle. They are for me too, Sometimes I just want to get to the food and forget the blog. Inevitably the camera is nowhere to be found, or the card is missing or the battery low. Oy vey, and we do all this for free!

Keep it coming dear Martha and have a happy Mother's Day. (we are resting, right?)