Today is Mother's Day . . . when I was a child, everyone (including the children) wore a corsage or a bouttonniere  to church on Mother's Day -- some were roses and some were carnations -- ours were always carnations.    Red if your mother was living -- white if she had passed away.    Mother, brother and I all wore red while Daddy wore white.       It was, I think, a nice tradition.

When we had company and the many leaves were put in, a special white  tablecloth would cover the table. 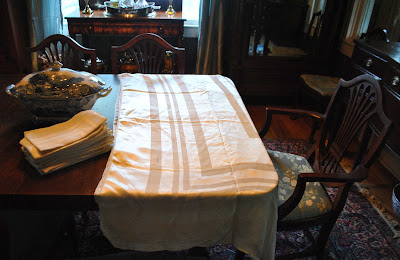 It's a treasure of mine now.    It's a silky fabric and mother would iron it she had laundered it  and iron it again before putting on the table.    There are lots of napkins (22 -- although I'm sure that originally there were 24) and some are stained from use -- but those stains are memories!    The tablecloth is large -- but not large enough to seat 22 or 24!!!    So I'm not sure why so many napkins!

And I use it -- sometimes -- when we have company and the table has all of it's leaves in!

Hopefully, I too, am adding to the memories in that tablecloth!

My mother's day present from my very special (and thoughtful) daughter? 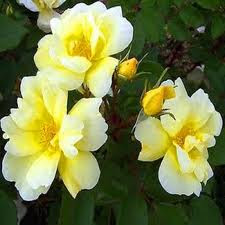 Three yellow knockout roses for the garden.   Named "Sunny" -- and  they certainly are.   I planted two where I can see them from my desk in the living room when they bloom.

It was such a thoughtful gift and one that will last "forever" -- giving me joy (and flowers for the house) for years and years to come.

If the tradition of mother's day corsages had continued, both husband Jim and I would be wearing white today.
Posted by Martha at 8:25 AM

I love the story about the corsages. My cousins and I were discussing yesterday our dread of Mother's Day. They said they can not bare to go to church because how they celebrate Mom's. The corsage idea would honor both those here and those we are thinking of on this day. I'll have a white one too....

Really a lovely post, Martha. I have fond memories of the tablecloths coming out at the holidays as well. Beautiful gift from your daughter. Today I would be wearing a white corsage as well. xxoo Nancy

Oh my gosh, Martha, I had forgotten that tradition! thank you for that, it was lovely.

I love the gift from your daughter for as they say, it's the gift that keeps on giving!

Lovely post, Martha. "I Remember Mama" sending me down to the lily pond before church to pick purple irises for us to wear and a white one for her to wear. They weren't real corsages and I suppose we just pinned them on our church clothes. Mine would be white this year too. I know we're all so grateful for our wonderful mothers!!!

Martha,
Precious memories for Mother's day. You are always so thoughtful to share family traditions with us! Your 'knock out' yellow roses are gorgeous. I know each time you see them you will think of the love you have for Sarah and all the joy she has brought you through the years. I, too, recieved a 'knock out' rose bush from son and daughter~in~law today...mine is pink! We, both, are truly blessed!
Fondly,
Pat

My childhood church used to have corsages too, and on Sunday, in church, I found myself thinking how I wish we still had that lovely tradition. What a lovely way to remember and honor our mothers. So glad you had a nice Mother's Day!