At Linderhof.    "She" being our American flag.

This is "Flag Week" because "Flag Day" falls on June 14 and the week that includes June 14 is now known as "Flag Week".   Citizens are encouraged to fly Old Glory during this week.

By a Congressional Act in 1949, June 14 was designated as Flag Day.     Because on that day in 1777, the flag was adopted as the "Official Flag of the United States of America".

And although it was designated by a Congressional Act, it is not a National (nor Federal) holiday.

I am proud of our Flag and proud, too, that many of my ancestors fought under that flag.

Thus, during the week that June 14 falls, we proudly fly the red, white and blue! 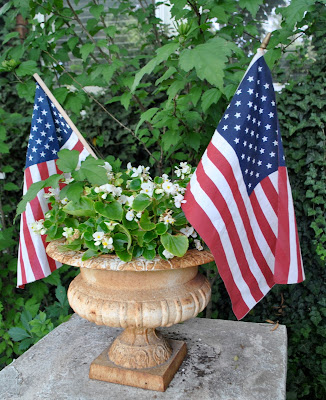 In one of the chippy planters in the front. 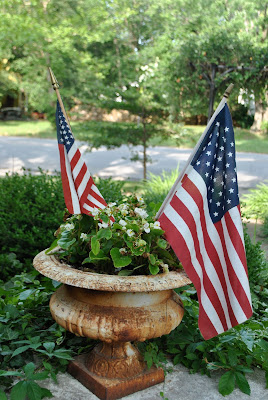 And in the other chippy planter.


It is our way to show that "We're Proud To Be An American".


And the big flag (3 feet by 5 feet) flies from the porch at Linderhof.


And even the back flower boxes get their flag decoration as well.

We'll put up the little flags after this week.    But we'll keep flying the "big" flag from the front porch.

The little flags get put out again during the week that the 4th of July falls.

We love to show our patriotism and flying the flag is one of the easiest ways we can do that.

It's Wednesday and I'm sharing my flags with Susan at A Southern Daydreamer for Outdoor Wednesday.
Posted by Martha at 11:08 PM

I needed this reminder (re. flag day)! Thanks!

Love your flags. Ours is out too. Has been since Memorial Day, when we had a neighborhood BBQ in the field next door.

And after seeing all the Union Jacks out all over Britain for the Queen's Jubileee, it makes me smile to see the Stars & Stripes flying in the neighborhood.

It looks wonderful. I never tire of seeing our flag being flown. Ours is going up today.

Thanks for the reminder, too! I had forgotten all about it. I have always loved red, white, and blue together in our flag!

There have been lots of Union Jacks out in the UK over the last few weeks because of the Queen's Jubilee celebrations. Normally you only see them on Town Halls and church towers on the whole. We Brits are rather low key on the showing our patriotism front:)

We always fly a flag at Pondside - usually the Canadian or the British Columbia provincial flag...but when we have guests we fly their national or state flag.