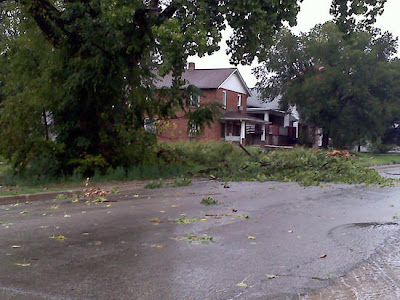 A storm came through our little town on Friday at about 3:30.    Luckily it was south of Linderhof and a few dead tree limbs that fell from the front trees were the only casualties here.

But our Community College and a car dealership suffered extensive damage.

A warm front and a cold front produced a serious storm that seem centered in the southern part of our town.    Some say a funnel, some say a microburst, some say high winds!

We are without electricity and may be until Sunday.    Between lots of poles being down and a main transformer being damaged, it will take a while to get everything back to normal.

Those folks who were smart enough to have generators are smug right now while the rest of town is learning to live without air conditioning and to read by candlelight!

The towns south and east of us are busier than ever as our residents go there to shop and eat and hook up to wifi.     Lots of Bourbon County tags in the parking lots of restaurants, Wal Mart and the supermarkets!

Thankfully, no one was injured from the storm.

So glad all is well. We got stuck in a horrible storm last night with terrific wind and rain..hate driving in it!

Martha,
Thank goodness, you're all doing well, considering! I'll try to communicate with my Dad in a few minutes!!! Usually don't call until Sunday...but I'd feel better hearing his voice!!!
Fondly,
Pat

So glad you are all well, and hope you don't have to camp out too long!

Oh dear, Martha -- it is that time of year! I'm so glad your house wasn't damaged and that you, Jim, and the corgis are fine. I hope you get your electricity back soon. Is the community college where you teach your classes?

So happy you all are alright and beautiful Linderhof is unharmed. So sorry to hear that your community has been hit. Should you find you all need anything, please post for us...
Take care and hope things get back to normal quickly.
Fondly,
S

Praise the Lord, no one was injured! Have "fun" camping out.

I heard that your part of the country had storms but this was close to home for you. Glad you are fine and hope your electricity returns sooner than you expect. Enjoyed your soup post! I'm behind on blog visiting this week!

So scary, but glad all was well for you. They moved patients out into halls again at St. John's. This area is nervous with thunder, etc. I saw the storm north of us and shuddered. Trees twisted here in parts of town but all was nothing like what you all had. Beautiful day this morning....enjoy the cooler air....

One bolt short of a toolbox said...

Thankfully everyone is okay. We actually had a tornado here this morning, it was quite shocking in NYC

Glad that you and the pups are safe. Hope you have a gas cooktop!! Also hope it isn't too hot.

Glad to hear you are safe and sound Martha. It's scary when storms like this blow through. I hope you get your power back on before you've been told and hope you have some way to still enjoy a cup of tea.
Judith

Have been away from blogging the past few days with other obligations...gosh, i didn't realize Ft. Scott was hit so hard! Glad you are all ok!