"The Out of Towners" or Two Rubes Navigate NEW YORK CITY!

We enjoyed our weekend at The Beach House with Cass and Howard.

Southold is beautiful and the view from the porch sublime.

And then Cass told us that in between Point A (Southold) and Point B (New Jersey) was a small 'burb called "New York"!     Gulp!


With copious notes from Cass


Miranda (the Garmin) who as Howard knew insisted that we go through the heart of Manhattan and "The" tunnel! . . . and . . .

On the Long Island Expressway (495) heading toward "the city"!


And we did a fine job . . . until . . .we got a call from Cass who said that we needed to do a "Plan B" for the Cross Bronx Expressway had a bad wreck and traffic was tied up for miles.    (on the prairie, we're never tied up for miles!)    So we took the alternate route with verbal instructions from Cass and the trusty map and navigator.    (All the while, Miranda is trying to take us through the heart of Manhattan -- we weren't listening to her!)


this exit -- which we took but instead of right on the Grand Central Parkway I had Husband Jim go left onto 108th Street (I think it was the voice of Miranda saying "left", "left", "left" in my ear but Husband Jim thinks it is because I'm not the best navigator!)

And after several blocks on 108th street, we did get turned around and back to the point that we could take the Grand Central Parkway to the RFK Bridge (the old Triboro Bridge -- well, it's the same bridge -- RFK is the new NAME and Triboro is the OLD name)

I like to think that we got on track because of map and navigator -- it certainly wasn't because of Miranda!    And like so many interstates that really go north and south but the signs say east and west, I, the navigator was able to figure out which one to take and so . . .


We got to see the first view of the Manhattan skyline!


Breathtaking -- especially to the Rubes from Kansas!

The RFK Bridge -- on the way to the GW one.    They charge you for crossing bridges in New York.   On the prairie they're free!!!!


More skyline as seen from the car . . . on Husband Jim's side and on the bridge -- still breathtaking for us prairie folk!


And we passed the iconic Yankee Stadium.     A stadium of legends for I remember watching many a world series game played in this stadium when I was a child. 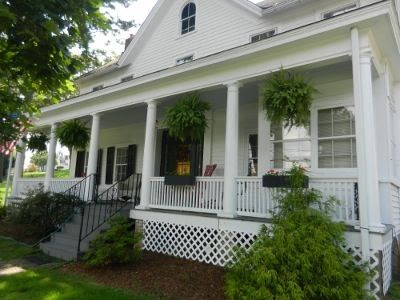 Ahhhhh. "That Old House" looks mighty fine to me!

There ARE a few things in NYC I'd like to see - one of them being Central Park. Maybe SOME day.

Good job!! Hope you enjoyed our Northfork. I live one little town away from Southold and Southold is where Lady B lives. Small world. Maneuvering around Manhattan is no easy thing. Feather in your cap.
Ruthie from :http://www.ladybstimefortea.blogspot.com

Well, Ruthie, Martha and Jim passed OVER Manhattan on the GWB -- I am not so mean as to take them thru Manhattan.

We had such a great visit with the Linderhoffers ... and I'm sure that visiting Fort Scott KS would not involve as many cars or toll bridges!

Martha,
You did a MAGNIFICIENT navagational job, dear friend!!! What a wonderful trip getting to see and visit Cass @ That Old House!!! When I do the "map reading"...I have to turn it upside down and sideways...always askew! Glad you're home safe and sound! I'll be watching with anticipation when Cass makes her visit to the Eastern Prairie!!!
Fondly,
Pat

Yes driving thru Manhattan can be frightening to first timers but think...at least you didn't have to drive TO Manhattan!

Can't wait 'til you are back in the prairie safe and sound.

OMGosh you are brave. I navigated my hubby in Omaha once and we ended up in Iowa. We recently survived Denver where the speed is 55 but everyone is driving 70. You did good!!!! Great to say you've done it and seen it.

I must back track in your posts.

Gosh, Martha, I was on a tour bus and you did as well as they did! NYC fabulous! Glad you had such a wonderful time. Lucky us! xxoo Nancy

Have been through that tunnel and it was the first time we ever came in contact with guys wielding their brooms and wanting to wash the windscreen. The American friend who was with us said 'don't open your windows' !