Flavors of the Season

Last week
The Lunch Bunch
came for the November lunch

Lunch had both the flavors and the decorations of the season 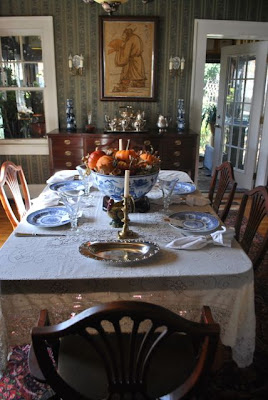 We're lunching in the dining room this fall and winter and into spring
because there are way too many plants in the breakfast room to be able
to put four around the table! 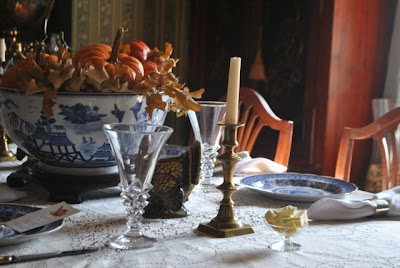 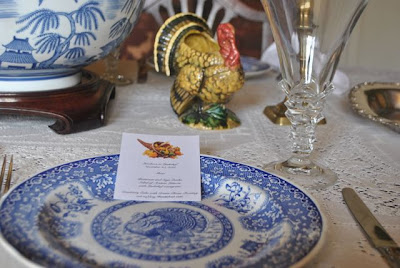 The turkeys come out after Halloween
The first one bought when I was first married and wanted some Thanksgiving decor
The second bought years later because I thought I needed a pair!

Spode Festival plates (because I thought I needed turkey plates for Thanksgiving).
A menu (as always) 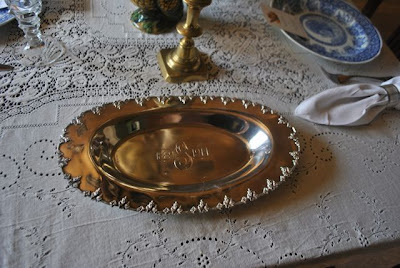 A cranberry nut yeast bread to be served in this great silverplate bread tray.
Initialed and dated 1889 and 1914 (25 years -- I'm guessing it was a silver anniversary present long ago) 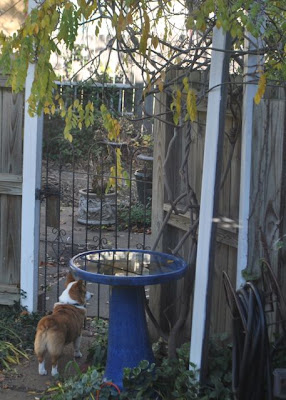 Dolly always eagerly awaits company and rushes to the gate when she hears car doors slam!

The menu?
Flavors of fall and Thanksgiving 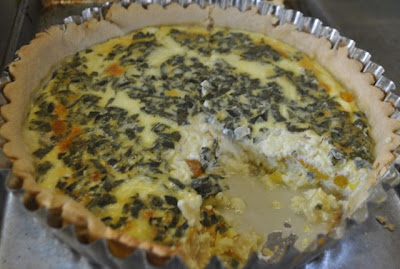 A butternut squash and sage quiche.
Eaten at Webster House a couple of Sundays ago -- it was delicious and I knew it would be perfect
for the November Lunch Bunch. 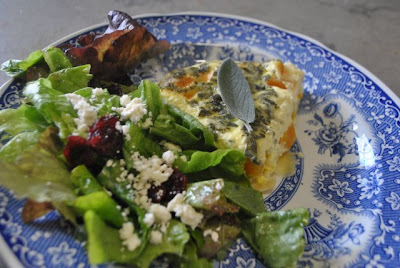 Served with a salad of cranberries and feta cheese

And most importantly was dessert -- 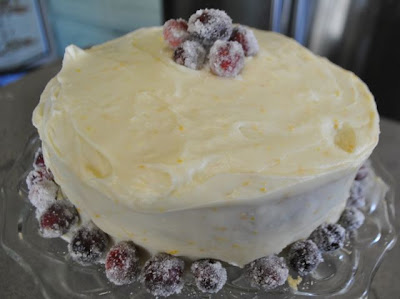 A cranberry cake with orange cream cheese frosting
and decorated with sugared cranberries. 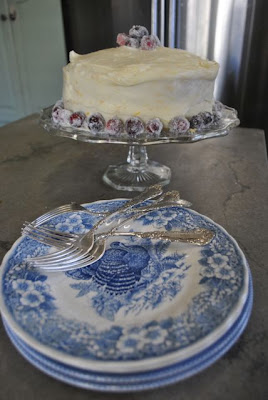 To be served on dessert plates with Mrs. Boland's forks
(It's a sham, though, there are only two turkey dessert plates -- but it does look like four doesn't it?)
(I think I need to rectify that before next Thanksgiving) 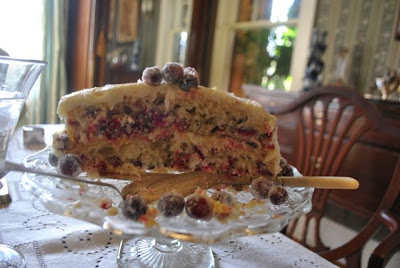 The cake is served in the dining room.   It's both pretty and good! 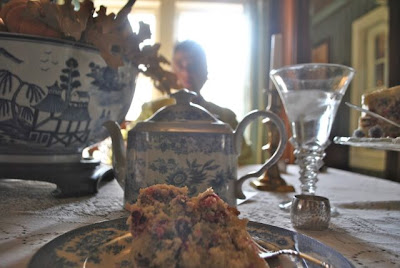 And goes perfectly with the Blood Orange tea that I brewed!

It's Thursday and I'm joining Susan at Between Naps On the Porch for Tablescape Thursday and Cuisine Kathleen for Let's Dish!    I'm sure almost everyone will be showing off their Christmas tablescapes for it is beginning to be the season.     But I thought you might enjoy one last Thanksgiving one!

The quiche and the cake - look extraordinary!

Your table looks lovely, Martha, and your cake - WOW! Wish I were there to taste a slice.
Blessings, Beth

I am so hoping to get my mom's blue and white china and have been taking so many notes from you on how to show them off at their best.. Your table is fabulous! cake looks so wonderful.. xo marlis

Oh, to be a member of the Lunch Bunch!!

I love the unexpected blue for your autumn table!! And please share that butternut squash and sage quiche recipe, that looks AMAZING! Thanks for sharing your lunch bunch with us. Can we join long distance??? :)

A Cottage in the Clouds said...

What a pretty table...love the blue and white. And the food looks delicious.
Lovely house, by the way...reminds me of my grandparents' house.

The table is lovely, but the menu is extraordinary. I wonder if you would share the recipe for the quiche. It looks and sounds delicious! Dianne

Martha,
Such a lovely tablesetting, dear friend! You menu sounds delicious!!! Your Cranberry cake is divine...I love pretty cakes!!! Dolly has been quite a pleasant addition to Linderhof. . .enjoy hearing of her antics!
Fondly,
Pat

Thanks for linking to Let's Dish!