And in 2006, while cruising on ebay
for some turkey dishes
(because I thought I needed turkey dishes)
I came across 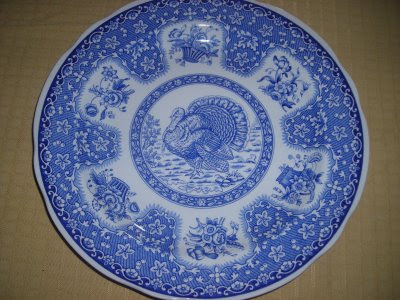 These Spode Festival plates
Not an old pattern -- they're new to the Spode stable
The auction was for 8 plates and I won them!

Although they had turkeys on them,
I reasoned that if I had a lot of guests,
that they could be mixed with my other Spode dishes
Some guests would have flowers, some would have an Asian design and some would have turkeys!

So, I reasoned, it wasn't as if I would only use these dishes for
one day! 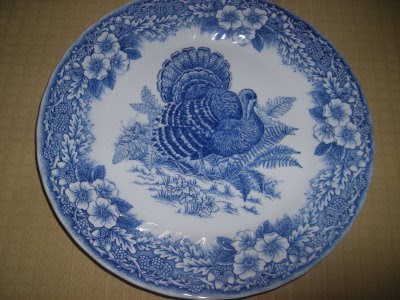 They had these
Reasonably priced
Would fit in well with the others
were made in England
Could also be used anytime  during the year
So I bought 8 more.

If we had more than 16 at Thanksgiving,
the Spode blue room would fill in nicely.

I adored my turkey plated Thanksgiving table in 2008.

This year, I decided that I absolutely needed 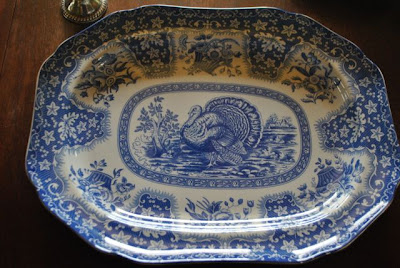 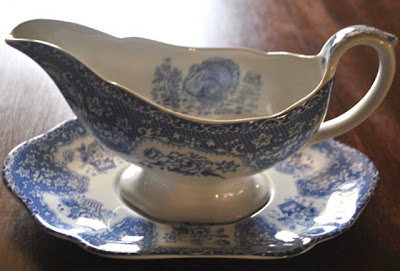 The vegetables go into my other Spode blue and white bowls
and it is a pretty table.

All the blue and white on the table
with an orange and gold centerpiece
of pumpkins or garden mums.

Alas, I've not hosted Thanksgiving since 2008
For in 2009, we celebrated our 40th on a cruise
That anniversary fell on Thanksgiving and we had no turkey but rather steak and champagne!

The following years,
we've joined our daughter's in-laws for Thanksgiving.
They've opened both their homes and their hearts
to share their Thanksgiving with us.

The turkey dishes are in the cabinet in the dining room
awaiting a Thanksgiving at Linderhof.

And they could be used anytime during the year!--- Perhaps split them between the daughters-in-law? Hence turning Thanksgiving over to them permanently? Just a thought.

Oh, Martha, you know how I love blue and whites! Thank you for showing your lovely Thanksgiving blues...I enjoyed them so much this evening. I have a plate just like yours also from TJ Maxx but mine was brown and white, the only one they had. But I have my mother in law's brown and white plates and they always feel like November to me, a little change from the blue and whites.

They are all so pretty, Martha. I'm glad you will get to use them and I can't wait to see your Thanksgiving table. As you know, we Canadians are past our Thanksgiving celebration and now we are chompin' at the bit for Christmas. Bring it on! Deb

Beautiful dishes will grace your Thanksgiving Table...thanks for sharing!

I love the turkey dishes. How smart to get them in blue (one would think a brown or golden color as it is fall). By all means mix them in. Those plates will hold turkey yet. Good to be ready.

Yes, Martha, we are sisters in a past life. OF COURSE you need those turkey dishes.

When I worked at the antiques mall on Sunday, a woman bought a lone blue and white turkey dish -- so of course I asked her about it. She has been collecting them one by one for years -- has about 20 now!

I almost asked to go home with her.
The only turkey dishes I have are last year's Pottery Barn luncheon sized! I need to pick up the pace, don't I?

They are gorgeous, every single blue plate. I keep thinking I need some turkey plates too, especially the platter.

They're all gorgeous Martha, and isn't it best to be ready for any occasion? ;o)
Rose H
x

Martha,
Your blue & white Turkey dishes are a gorgeous addition to your collection!!! Prepared is a "good thing"!!!
Fondly,
Pat