On this last day of 2012, I'm looking back and sharing my favorite posts.    Mostly tea ones and often company ones for we love to have company at Linderhof -- to share food and fun over a cup (or pot) of tea! 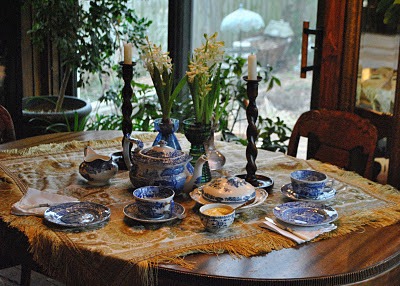 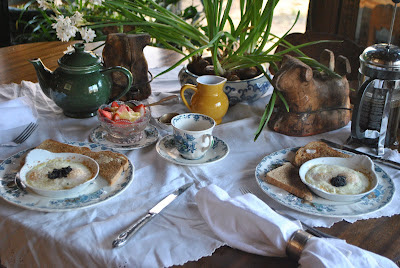 A Leisurely Saturday Breakfast
It's Lent and the French lamb molds are on the table as are some paperwhites.    Blue and White for breakfast, of course.    It's a partial set of Mother's.    Winter Saturday breakfasts tend to be more leisurely -- summer ones not so much. 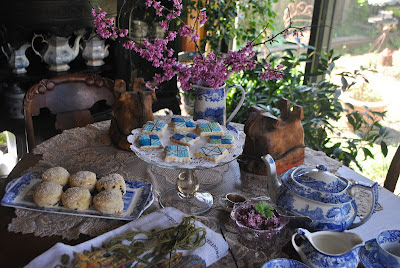 Thimble Tea
Friend Joyce came over to enjoy scones and quilt cookies as we stitched and sipped.    The cookies are blue and white as is the tea ware -- Spode's Blue Italian all around! 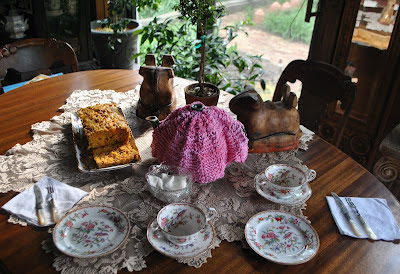 An Easter Week Tea
Carrot food (muffins, breads or cookies) often finds it way to the tea table during Easter week.   This is a wonderful carrot and poppyseed bread that goes so well with afternoon tea.    Friend Carol joined me as she gifted me with the tea cozy.    Spode Famille Rose on the table and my latest acquisition -- a wee myrtle topiary (which I still have and which is much bigger!) 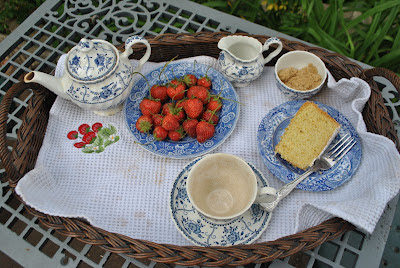 Tea In the Garden
It's never too hot in May to work in the garden.   And garden chores abound.    But in the afternoon, at half past three, one can always take the time to stop -- not to smell the roses but to have a cup of tea and tea cake and some locally grown strawberries. 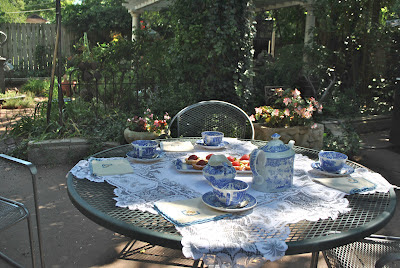 Garden Friends for Tea
It was a nice afternoon and the garden was tidy and so I invited three garden friends to share tea with me in the garden.    A tea treat (strawberry tarts) made just for the occasion.   We sipped, we visited, it was an enjoyable afternoon. 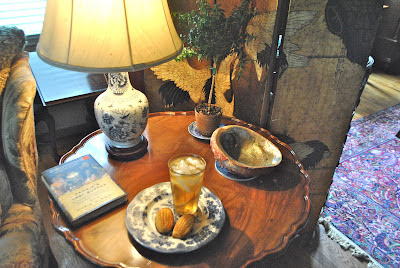 Triple Digits - There's still tea in the afternoon -- But It's Iced
Alas, the heat wave in July found us taking tea inside rather than out -- in the living room which seemed cooler than other parts of the house.     Still tea (only iced) and madeleines which are a good nosh with tea whether hot or iced! 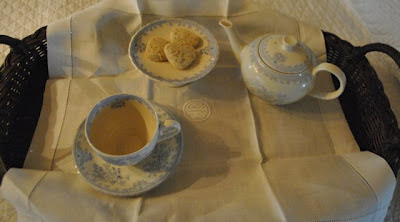 Rainy Days and Sundays
A rainy Sunday afternoon found me in the Master Bedroom, with a book and a tea tray.    On the chaise -- bought just for such afternoons!   And did I nap?   I'll never tell! A Respite for Tea
A bad storm left us electricless.   Once power was restored, we baked up some Donna Morgan's English Ice Box Tea Muffins, brewed a wee pot of tea and enjoyed what we usually take for granted.

Tea In the Garden
With cooler weather, the garden became lush again.    We enjoyed the fall garden as much as the spring one.    Garden chores are made easier when one stops for tea and cookies -- white chocolate chip, hazel nut and dried cherry ones. 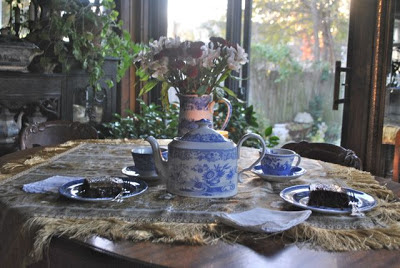 A Chocolate Tea
Alas, not chocolate in the tea but chocolate with the tea.    Chocolate cake and tea for friend Sally who was leaving for the Thanksgiving holiday. 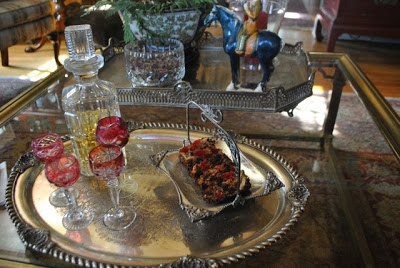 Not for tea but for sherry (Harvey's Bristol Cream, of course) served with thin slices of Friend Francie's grandmother's brazil nut cake.    Just one of the afternoon, when we had Christmas Company.   It's always fun to have company when the house is so festive.

I've enjoyed this look back at afternoon teas (and a breakfast)  at Linderhof during 2012.    And I look forward to sharing more pots of teas with friends in 2013.

I enjoyed looking back over the year with you, all cozy presentations. I'll be doing the same and look forward to reviewing my posts too. Hasn't the time gone by quickly?
Happy New Year.
Judith

Lovely year in review! I would be hard put to pick a favorite! Looking forward to 2013... Happy New Year!

This was a lovely reminder of all the blue and whites, among other things, I have enjoyed on your blog this year. For days when I am too undone or too busy for my own tea time, TEA WITH MARTHA is a nice second...a few mintues with peaceful pictures that show warmth and calmness in a harried world!

Would love to know what kind of conversations you have while sitting at these beautiful table settings. I cannot imagine one minute being bored! I am sure with all your interests and talents the talk is as stimulating as the setting!

Thank you Martha, I so look forward to your posts every day and especially enjoyed your review for 2012! I am looking forward to your adventures in 2013 and so glad you keep us posted!

Have a very good, healthy and HAPPY New Year!

If I had to chose, I'd have difficulty in pointing to a favourite. Every one was a treat!

I so enjoyed reading your year in review. Wishing you a Happy New Year and what an exciting year it should be.

Such a lovely stroll down memory lane.