I adore topiaries
Between A Botanical Touch by Cynthia Gibson and Carolyne Roehm and her "Seasonal Notebooks",
I fell in love.

It was the mid 90s and I drooled over Cynthia's topiaries
and topiary forms.

They (topiaries) had not gotten to the prairie as yet!

But a girl can dream from afar and dream I did . .

In 2000, I decided to host my first Valentine's Luncheon at Linderhof.
A girlfriend lunch to celebrate not love but friendship.

I had my table all planned, the menu fixed
And then I was in a market in the city
And what did they have?

Heart shaped ones and ball ones.

But I really hoping to have a topiary for the long haul . .  .
A heart in March would be like the poinsettias in January
or the Easter lilies in May
passe!

So as much as I thought two hearts would make a great Valentine's centerpiece,
I bought instead 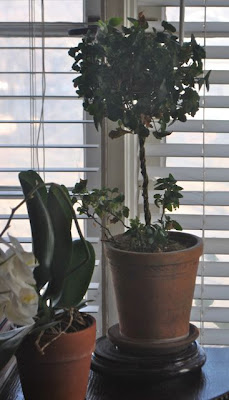 And just one --
One never should be too greedy!

It was a wonderful centerpiece for that very first Valentine's Luncheon
And it's a tradition we continue
My annual luncheon for friends on Valentine's Day.

And as much as I like tradition,
the topiary isn't always my Valentine's centerpiece! 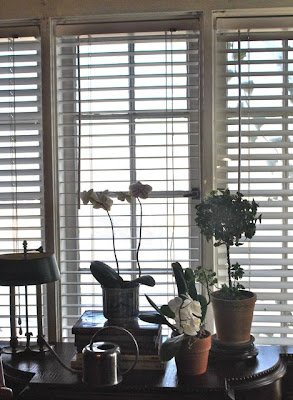 Most times she stays in the east window of the upstairs sunroom.
She seems to like it up there
And she has orchids to keep her company

She was the first . . .
but others followed.

Including myrtle topiaries.
I simply adore them.
You can find them readily now.
And you see such great pictures of them
sitting here and there in homes.
Usually in twos.
One on each end of something with "things" in between.

But alas, I've bought many a myrtle topiary
And I was not myrtle topiary worthy
For within a month or so I managed to kill them off. 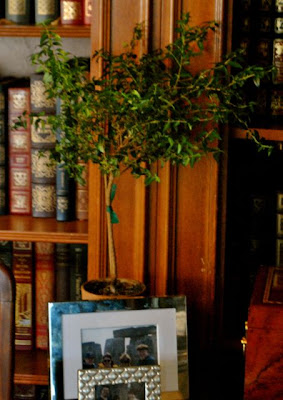 Once home, I repotted in one of the hand thrown pots I brought home from England.
And babied it and watched it
And it grew and another month passed and it grew some more

We're almost to the one year point and it is thriving!
It needs a haircut, I know.
It reminds me of a comedian in the 60's who had sort of wild hair!
And I will give it a trim.
I have a couple of times already! 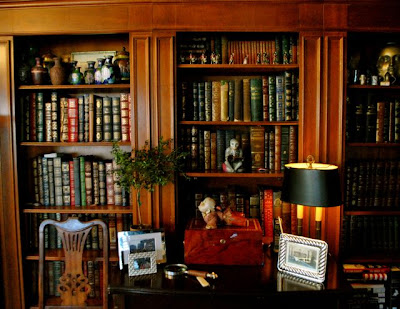 These myrtle topiaries look good no matter where you place them
Either singly or in pairs!

I've got my fingers crossed that we'll celebrate the one year anniversary in a few months.
And then, I feel, that I can add myrtle topiary to my list of plant accomplishments. 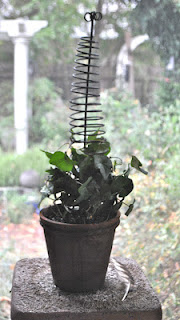 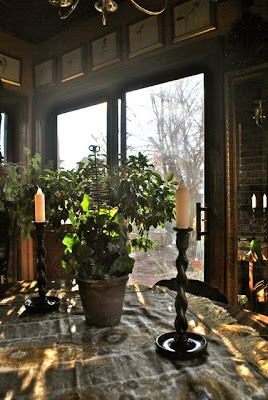 It's often on the breakfast room table
If there isn't anything else to put in the middle.
The rest of the time it lives on the floor in front of the windows.

My three topiary successes
come at the expense of a lot of failures.
I'd like to say that I bought the topiary
and was successful in cultivating it.
But no, there are a lot of "topiary graves" at Linderhof.
Plants bought that didn't make it.

But I am proud of my three success stories
And hopefully, they will encourage you to try you hand at these fun plants!

Reminded me that the title of this post should be
The Three "T''s and a "D"!!!

It's Wednesday and once again on the prairie it is too cold to even think about being outside.    I've got a big lasagna in the fridge for we're having company for dinner.     It's a good time of year to have company over!

I'm joining Susan at A Southern Daydreamer for Outdoor Wednesday.
Posted by Martha at 4:19 PM

I enjoy you blog immensely. I especially love your kitchen and garden room. While looking at today's posting I saw some lovely and interesting shelves behind the myrtle topiary. I thought, "Wait a minute! What room is this?" I guessed from the style that it might be your living room, but I don't remember ever seeing those shelves, so I started back through your living room posts and saw just little glimpses of them. I think that you usually show the other end of the room? I would love to see these shelves closer up!

Oh I wish I could attend your DOWNTON CLASS Martha - how fun! I love topiarys too!

I too have some topiary sucesses, right now have a rosemary topiary sitting on the end of my island. It's not looking the greatest but I am trying to baby it. I also have a couple of other topiaries, I should do a post about them sometime soon. I have also had some topiary mishaps as well, those little suckers can be fussy. I enjoyed your post.

I'm a topiary fan as well. Sometimes I can keep them alive for years and years, other times not so fortunate. Plan to buy a new one for Valentines this year, but haven't yet seen any available. Like you, I like the ball shape because it's timeless.

Such a delightful post ~ so glad you got so many topiaries ~ Your doggie is what I love!

Martha,
Love your Three T's...
I am a murderess when it comes to ivies!!! I've finally given in to faux ivy and am at peace with my decision!
Love the photo of Dollie!!!
Fondly,
Pat

I love your warm and inviting home.... Every visit offers new surprises and completeness! Thanks for the hospitality.

I loved this post, Martha. Your survivors are thriving. I hope all is well. Have a wonderful day. Blessings...Mary