Saturday was a busy day . . .
Cabinet cleaning in the kitchen
Surprisingly, I didn't find any "lost treasures"
nor did I find any useless objects.

And after cabinets were cleaned and rearranged,
I stopped for tea
Because it was half past three

In the breakfast room 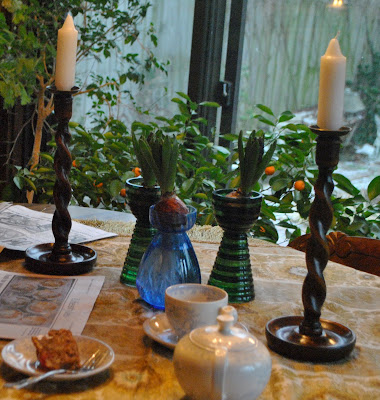 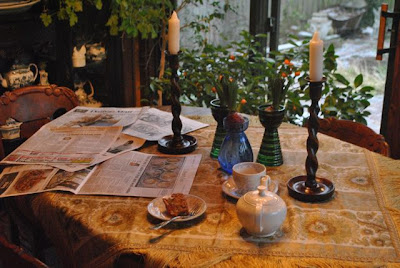 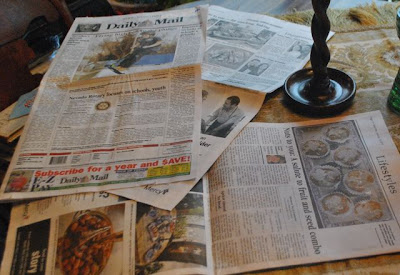 which feature my weekly column . . . Lines from Linderhof

The Nevada, Missouri,  Daily Mail (pronounced NeVayDah)
(for which I've been writing for almost 8 years) 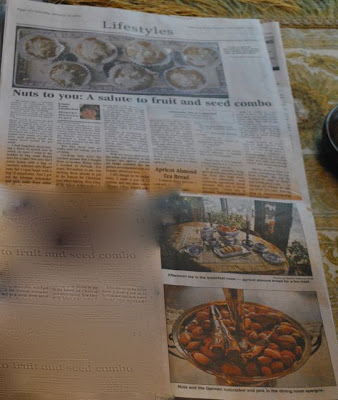 The Fort Scott, Kansas, Tribune, where the column started almost 16 years ago.

It was a little column on the second page of the paper 16 years ago, sans pictures, which is why I started the blog -- it was my way to tell a story with pictures -- the blog.
But almost 2 years ago, I sent a picture to the editor to explain my recipe
And she asked permission to publish it . . .
And the rest, as they say, is history.

Every week, I write an essay and include pictures -- usually 3 to 5 and the editors chose which
they want to go in that particular issue.

So every Saturday it's a surprise to see which ones they chose!
And I like that!

And it is nice that I have columns in two newspapers in two different states!
What one doesn't suspect, however, is that the towns are only 20 miles apart
And for almost all of those 8 years, they published one paper on Saturday for both towns --
so it was The Herald-Tribune

Week before last, they separated them again
And because of my Missouri readership over the last 8 years,
my column went to Missouri as well as Kansas!

Saturday, I was unaware that there was supposed to be "weather"
Friday after all was almost 70 degrees . . . 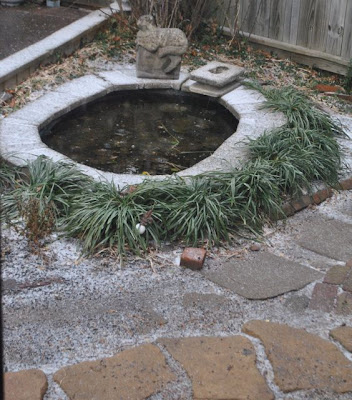 And now it's cold and treacherous underfoot . . .

And it's time for tea!


And I'm hosting a giveaway.
Not to celebrate anything
But because I found a "treasure" I wanted to share

A favorite cookbook author, one of my culinary heroes

It's her second book complete with dust jacket.

Just leave a comment and I'll put your name in the drawing.
If you're a follower, I'll add your name twice. 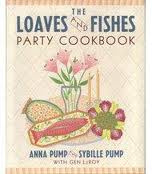 It's The Loaves and Fishes Party Cookbook

(I'm not giving up my treasured copy, oh, no, it's one I found that I wanted to share!)

And each day that you make a comment, I'll add your name to the drawing


It's Tuesday and I'm joining Sandi for Tea Time Tuesday.
Posted by Martha at 4:19 PM

I am sure your paper readership loves you as much as we bloggers do!

I'm sure you have found some interesting things to write about. And like Bernideen said, we bloggers love reading your blog.

I'm sure if I lived down your way I'd be looking for your column each week - but luckily, I can find you here, most days!

Good morning Martha,
What fun and a challenge too to write a column; two columns at that! I am sure your readers love you.
I still have some Christmas fruitcake left too. I gifted most of it to family members as well as taking a good chunk of it to Vancouver when we went. There's just enough left for a special cuppa with my favourite guy.
Thank you for joining me for tea and enjoy your day.

Martha,
What a neat way to spend your Saturday...not so much the cabinet cleaning, but reading the paper with your column!!! I made your Apricot Tea Bread today from last week's post. It's cooling on the rack, but will be "perfect" for today's Tea for One. "Mr. Ed" is visitng a former co~worker at a local hospital.
Fondly,
Pat

Wow, you are a busy lady! Since I can't read your columns, I am glad to know you through your blog!
Blessings,
Cindy

Column writing...how fun is THAT? Looks like a relaxing time with your paper and tea. Have a wonderful week! sandy :)

What a lovely ready ..your own column..What fun... and What a beautiful way to spend a Saturday..Relaxing...Hugs