And when I first got the "Biscuit" Barrel, I couldn't understand
why anyone would put "biscuits" in a crystal jar.
They're not really good leftover
They're best hot and fresh from the oven.

And then I took my first trip to England
And learned that there, "biscuits" were cookies. 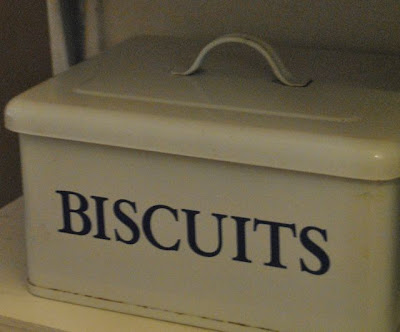 And I see "cookies" in this enamel one definitely marked "biscuits"
It's not English
bought instead in the city at some store that ages ago sold enamel ware
marked with "sugar", "flour", "tea", "coffee" and this one -- "biscuits"

It's in the larder
and does, indeed hold biscuits
The weekly output is put in there
So that one or two (or even three or four)
can be taken out for afternoon tea.

It's just one piece of our enamel ware collection
I have the one marked "sugar" and it's in the larder holding the icing sugar
And I have old ones
A "bread" one which holds bread and crackers.
It's old and is from England
As is the "flour" one which is also in the larder
It holds flour -- but not the regular flour but instead the almond meal and cake flour

And the biscuit tin this week
holds 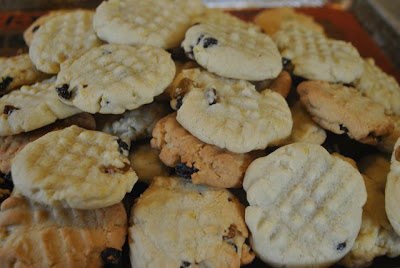 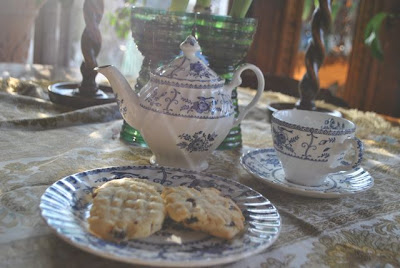 Blue and white Johnson Brothers, Indies
The wee pot bought almost 20 years ago on a trip to England along with one cup
(I had the grand idea of keeping a "tea station" in the bedroom, like the bed/breakfasts we stayed at --
it wasn't practical and that idea was soon squashed -- but the teapot and tea cup remained.
And were soon joined by more Johnson Brothers Indies -- plates and salad/tea plates and more cups and saucers!) 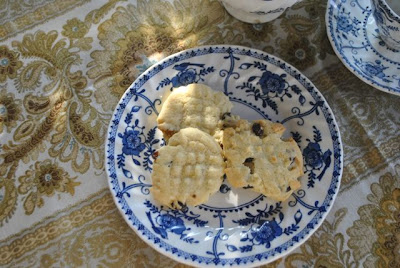 The cookies full of lemon zest.   A gift from a friend (lemons not the zest) who received a box full of lemons from her brother in law in California -- she shares! 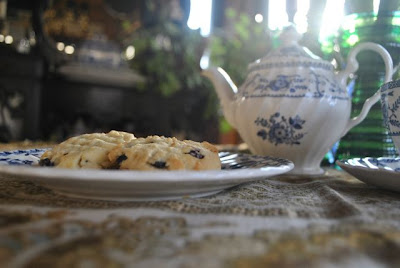 I love the late afternoon winter sun in the breakfast room as I pause
every afternoon at half past three
for a cup of tea and a nosh.
Posted by Martha at 5:14 AM

I guess with an English heritage I already knew what biscuits were, we shortened it to bickie - a silly term I still use occasionally.
I was looking at an enamel bread bin at a local store and would have liked it, but I have a wooden one already and it's too large for the counter.
Judith

In Downton there is a biscuit barrel in the bedroom and Daisy is caught eating one (by Mr. Carlson). Poor girl had no breakfast!

I love biscuit barrels and enamel containers. So cute. Very pretty tea-pot, too.

There are a couple recipes at the BBC Food site for tea bisuits:

I smiled at the thought of biscuits in your crystal jar. I actually keep nuts in ours. '-) But I do love biscuits, both kinds! Made biscuits for my husband's breakfast this morning, but I'll have a cookie biscuit with my afternoon tea. Your post is lovely with the blue and white and lemon zest cookies.

Hi Martha: Did your email address change? Have tried emailing you and it comes back. Even the new address here comes back. Will you put the recipe for the lemon raisin cookies on your blog? Thanks. Pat Mofjeld

Hi Martha: Did your email address change? Have tried emailing you and it comes back. Even the new address here comes back. Will you put the recipe for the lemon raisin cookies on your blog? Thanks. Pat Mofjeld

Martha,
Interesting BISCUIT enamelware container, dear friend!!! The cookies look delicious!!! Lemon is a favorite of mine and the daughter~in~laws, especially in the heat of the Summer here on the Prairie!!!
I'll be watching for your recipe!!!
Fondly,
Pat

Your enameled biscuit box is beautiful and those cookies sound delicious. I must try them soon. I love most anything with lemon.

I'm with Pat. I'd love the Lemon Raisin Cookie recipe, please. Enjoyed the teaching on buiscuit boxes. I had missed that distinction. The Indies is such a gorgeous pattern. I often think that the Johnson Brothers patterns are often under valued. Stopping at 3:30 for tea and a nosh...I think that I need to adopt that tradition. Thanks for inviting us for a peak. Cherry Kay