The Teapots of Linderhof

I don't "collect" teapots
I've never considered myself a collector
But I do like teapots
And more than one has found it's home at Linderhof
over the years
And it's years, too -- for I've had some of these for 20 years or more

The Wee Blue Ones 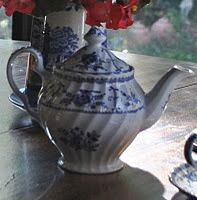 Johnson Brothers Indies
It's small and holds perhaps three cups
Bought on a trip to England
Because I loved the tea service in the bed breakfasts we stayed in
And I felt that Linderhof
should have a tea "station" in the bedroom
I bought the pot, a wee creamer and sugar, and two cups and saucers
And hand carried them home

I did set up the station --
But not for long
For you had to take the dirty dishes downstairs, wash them and tote them back up!

It was far easier to go downstairs for my first cup of tea.

But it is my favorite "tea for one" pot and I use it a lot for tea
at half past three when it is just me.

The Spode Blue Ones

The Blue Room pattern.
A Christmas gift from Husband Jim because I didn't have a "big" blue teapot!

Blue Italian
Bought in Canada
Because it was so much cheaper there.
I loved the shape and even though I had a Blue Room,
I felt that I need a Blue Italian teapot as well.

The teapot that goes with my silver tea service.
It's the Plymouth pattern and is a rather plain Colonial pattern

My grandmother's teapot.
It's really a coffeepot, but it works well for tea
If she had any other pieces of silver, I don't remember them.
Perhaps, it belonged to her mother or grandmother?
But whatever it's heritage, I'm glad it resides at Linderhof
and is a reminder of my dear grandmother.

And old silver one
From an Estate Sale
It turned out to be older than I thought
I love it's round almost onion shape
I traded a meal out for the pot -- I didn't go and so "saved" the money
I would have spent on dinner -- that money went to buy the pot! 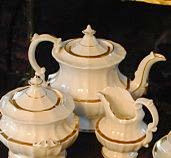 Old Paris
Mid 1800s
I collect gold and white china
And didn't have a teapot
Which came with creamer and sugar
and cups and saucers
and a few "oddments"
It's special and not used all that much
Used mostly for special teas! 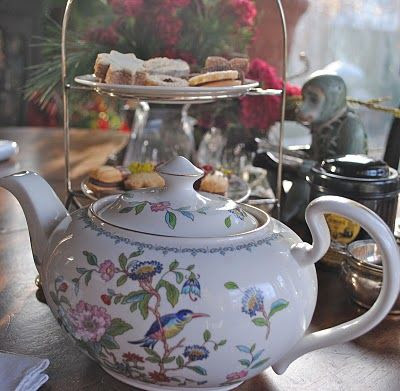 Aynsley Pembroke
It's bone china
So a company teapot
It goes with my "collection" of Asian bird and chrysanthemum
china.
It was bought specifically to go with those cups and saucers.

Wedgwood Asiatic Pheasant
It's transferware -- not china
And although it's blue it's more of a turquoise blue rather than the blue one thinks of when one thinks of English transfer ware.
It's part of a "tea set" -- teapot, creamer, sugar, cups, saucers and tea plates.
Bought years and years ago
because I wanted an English tea set and it was "sort of" blue and white!

Not a brown betty (although I do have one -- a large one that doesn't get used much unless I have a crowd for tea)
But a clay one,
A French one
An Emile Henry one
Bought for a song at Williams-Sonoma
For a song because it was "last season's" color!

I've had it a good many years
It's my most used teapot.
I use it every morning for my morning tea.
And if I use any of the silver ones, the tea gets brewed in this first --
then decanted into the silver pots. 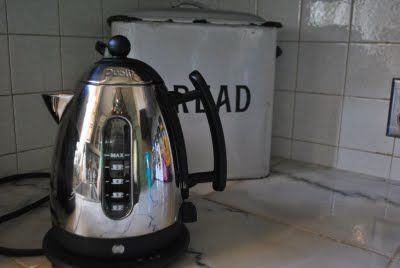 Is the tea kettle
An electric one
Ordered on line when we lived in England
because I was enchanted by the electric ones
there.
The same brand as we had there
except it's 110v while those were 220v.

And sometimes morning tea if it works out

It's Tuesday and I'm sharing my teapots with Sandi at Rose Chintz Cottage for Tea Time Tuesday.
Posted by Martha at 8:53 AM

You do have some beautiful tea-pots. I am partial to your 'Canadian' one.:)

Great collection! I love teapots. Besides the electric kettle, the teapots are so decorative as well...and added bonus!
Ruth

Dear Martha, thank you for the lovely tour of your tea pots on this cold, snowy morning. I love them all, but the Blue Italian might be my favorite! I had to stop my tea two months ago for health reasons. It has been so hard! My tea pots are silent reminders, looking lonely. Maybe someday soon I can add a little tea back but for now it is cold turkey on the tea!

What a wonderful collection - especially the blue and white ones!

I think I love that white one with gold the most - especially the shape!

A nice collection of teapots Martha. I'll use one mine for awhile then switch to another when I need a change.
Judith

Martha,
What an amazing and unique collection of Tea Pots, dear friend!!! While all are lovely, I was quite smitten with the silver tea pot with the onion shape!!! Thank you for sharing your refined collection with us!
Fondly,
Pat

Great collection, even if you didn't set out to collect them.