Changes -- One is a Surprise, One is a Puzzlement, One is Practical

This morning, we awoke 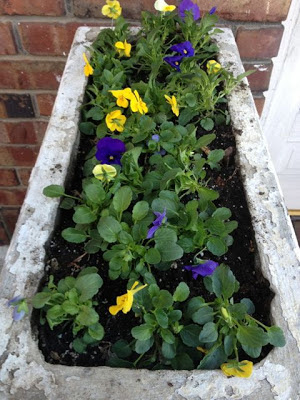 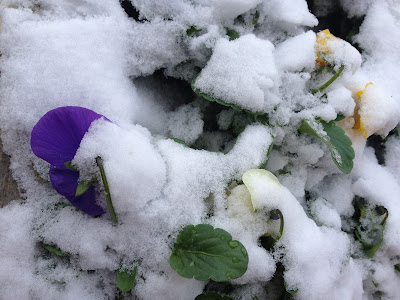 To be huddling under a blanket of snow 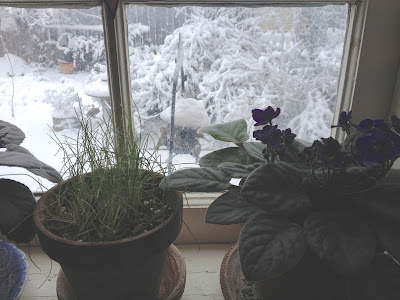 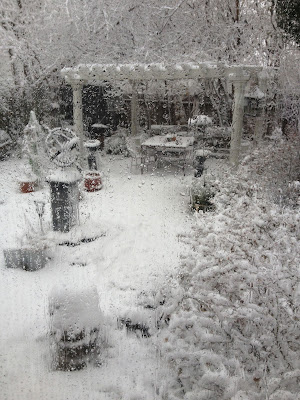 For the back garden was snow covered 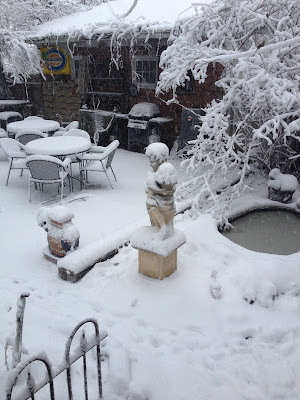 As was the patio
About 4 inches we estimate

Snow falls on the prairie mainly in January
sometimes in February
rarely in December
(we always dream of a White Christmas -- sigh)
but hardly ever in March
and almost never the end of March!

Thursday, we found something in the back garden 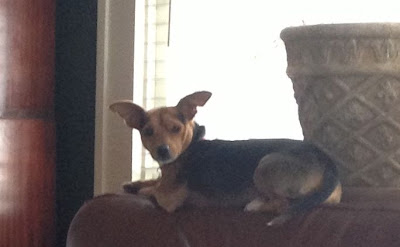 This little guy
I immediately posted his picture on facebook
Because I was sure he was lost
But no one even commented on the post
I must admit he is working his way into our hearts
And Dolly likes him
He doesn't have a name
But I did buy him a collar!

And with the cold and snow 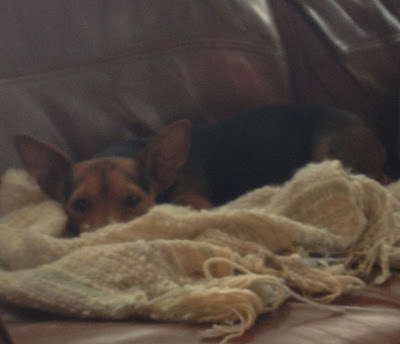 Snuggling on an afghan on the sofa seems to be the perfect thing to do!
Unlike the corgi, he does like the sofa!

The top of the Chinese chest in the dining room was filled with blue and white bowls.
They've been there a long time
And are purely decorative
They serve no purpose and I really don't use them
They're ringed by part of my collection of silver napkin rings 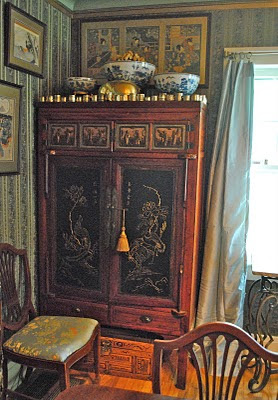 It is a flat surface and it would make for good storage
The blue and white bowls, alas, got relegated to the basement 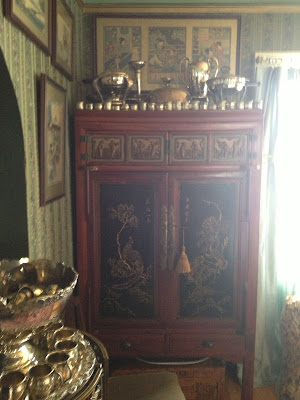 And in their place the bigger pieces of silver that previously resided in the cabinet itself
Freeing up room for my Old Paris tea set
The two silver chafing dishes, the silver dome, my silver coffee urn and the silver epergne

And next to the cabinet is the old server 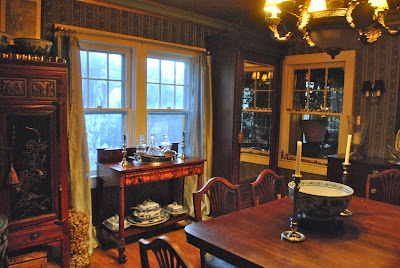 Which held some of the blue and white china
But 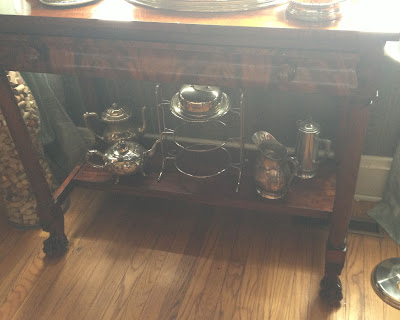 And decided in was the perfect place for storing more silver --
My Grandmother's teapot, the old Estate sale find teapot, a silver water pitcher I fell in love with and a chocolate pot
In the middle is the silver curate which I had stored under the sink
And was a real pain to get out and put back . . . and I did that
several
times in the last month or so
I needed a much more accessible spot
And that was really why I decided to make some changes
A storage place for the curate

I'll have to polish a bit more often
because silver stored in light tarnishes much quicker
But that's okay
I really do like to polish silver!

And with the snow today and a new cookbook to peruse 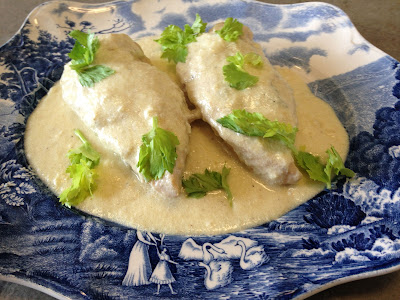 The new cookbook -- The Canal House Volume 3 -- Winter and Spring

The dog is adorable, no wonder you already love him! You must be fed up with the snow, but the pictures are really beautiful.

Awwww the new edition to your family....so glad he found someone to love him. I'm surprised the local shelter/post hasn't yielded any calls. So I'm glad he found you! Also, your mother's tea set is just beautiful!

Your March prairie snow has worked its way to the East coast and we are now blanketed in several inches of the white stuff... gone are the budgeoning spring blossoms. It is a beautiful scene... but, I am ready for slightly warmer temps and beautiful colorful blooms! BTW, that little doggie looks like he belongs right where he is!

The weather is changing for all of us and has become unpredictable and it's a good thing pansies can take snow and cold.
Surely someone is missing that sweet little dog but if he doesn't get claimed he'll be treated well at hotel Linderhof.
Judith

Hi Martha, The little dog is cute and he found a place where he'll be well cared for and loved if his owners don't claim him. You might want to take him to the vet to check for a microchip. I enjoyed your post about the macaroons and macarons, too. Happy Tea Time Tuesday, Martha!