Is it Macaron or Macaroon?

Actually, it's both
For I decided to try my hand at the French Macaron
(those egg and almond sandwich cookies)

I've had them
As often as I can
But I've never made them
I was a bit intimidated by them. 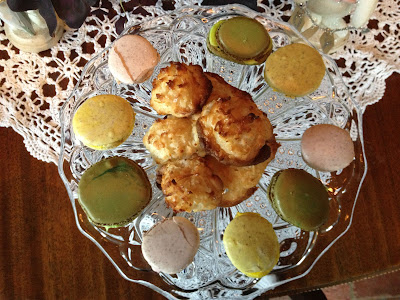 And since I was baking anyway,
And since I had egg whites
I decided to also make macaroons
Those coconut cookies that are much more prevalent on the prairie.

And what to do with a platter of cookies?
Put the kettle on, of course 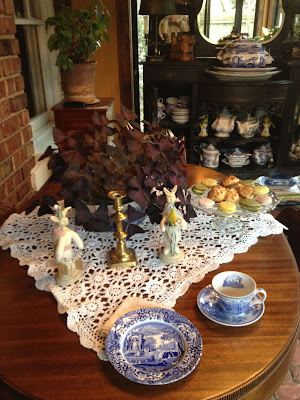 And invite a friend for tea
And macarons and macaroons! 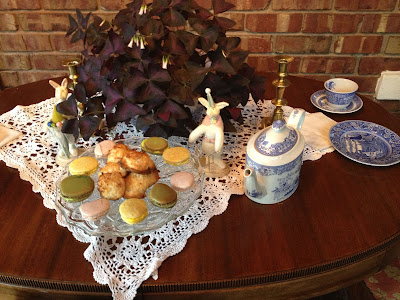 Tea for two in the breakfast room
Which really should be renamed the "tea room"
for we take tea there almost as often as we breakfast there! 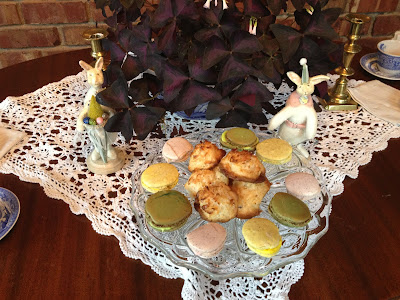 It's almost Easter.
We rescued some rabbits from the basement storage
to add a bit of holiday and whimsey to the tea table.

We never mind when a recipe calls for egg yolks
because the "bonus" is the whites
Leftover whites make terrific cookies!

Both cookies are really easy.
The French Macaron one came from Martha Stewart
And I usually find her recipes a bit too fussy for me.
But this one not so much.

The coconut macaroon is the standard:
coconut, egg white, Eagle Brand milk and a little vanilla.

I used Ina's recipe but I think it is a pretty standard recipe.

Whip egg whites and a pinch of salt until stiff peaks form.    Mix coconut, milk and vanilla.    When whites are stiff, fold them into the milk and coconut mixture.    Use a 1 inch ice cream scoop and place on silicone lined baking sheet.    Bake at 325 about 20 minutes or until brown and firm.

I love Ina's recipes, too. Your tea looks lovely with all your bunnies and sweets. Happy Easter!

My first attempt at macarons was an experience and I hope to try them again. They are so good! Save a few for me Martha.
Happy Easter.
Judith

Oh yum! I have never attempted to make macarons or macaroons. I think it's time I change that :) By the way, your doily is gorgeous!

Have a delightful day!

Hi Martha,
I haven't been brave enough to make the french macarons but the macaroons are easy enough. I love those too. I tried a macaron when we were out visiting our son in Vancouver and it was lovely. They don't seem to have them here where I live. Yours look wonderful and colourful. You have set a lovely tea and I would love to join you. Thanks for coming to tea and have a beautiful day.

Looks like all is well in your lovely home! The french macarons and coconut macaroons certainly look delicious. This a great way to have tea and treats. The bunnies were glad to be rescued from the basement for they great a festive Easter table! Hope your garden is blooming with some Springtime flowers! It is cool in Texas now but has been warm with many blossoms! I think of your town when I visit your postings!

Your cookies look sooooooo yummy. I have been checking your blog daily but haven't posted a comment, timing? Will your pansy's do okay even with a layer of snow on them? Hopefully they will bounce right back. We are having some cold weather here but not enough to damage anything I have planted. The pansy's love this coolish weather and they will last a little longer. When our heat arrives I will be pulling them.

I wish I could reach in and sample each of your cookies! I'm sure they taste as delicious as they look! Thank you for sharing the recipe.
Your home is beautiful and I enjoyed reading about the foundling! Rat Terriers are described as "sturdy little farm dogs"! They are eager to please and very clever.
Happy Spring and a Blessed Easter!
Deborah
FairfieldHpuseNJ.com

Hi Martha,
It's so great to make macarons, isn't it? I remember being at some sop or other and really wanting to buy some only to discover they wanted $11 for six cookies?!? Is that even possible? Made of gold are they? lol Good for you to make yummy little treaties for tea. Have a lovely day. :)