A longstanding tradition at Linderhof

But one we continued when we lived in England that Spring 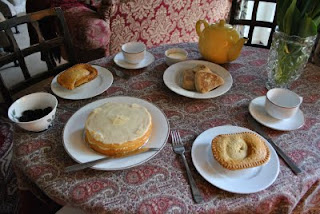 A high tea at our cottage in Wiltshire
We'd call it supper but to the Brits it's tea
Meat pies, crumpets and a cake
With a pot of tea, of course! 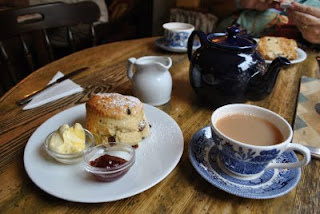 We visited the little village of Winchcomb at tea time
And had one of the tallest scones!
A fruit one (with currants)
And of course, our pot of tea 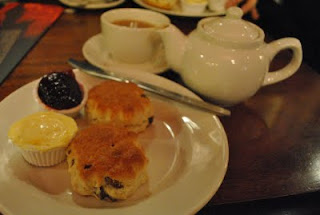 Oxford was close by and we went several times
One of the highlights was the Hogwarts Dining Room
(which is really the dining room of King's College)
and after what seemed like miles of walking around Oxford
we stopped for tea
A cream tea -- scones, cream and jam 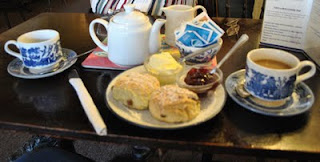 We lived most of that spring in the Cotswolds
And we passed through the quaint named Cotswolds towns often
A favorite Moreton-On-Marsh
had a great tearoom.
Another cream tea. 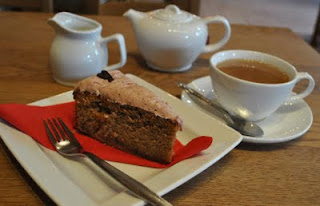 Kenilworth is a fascinating ruin of a castle
But it has a tea room!
And after the grand tour of the ruins of Kenilworth
we stopped for tea and cake. 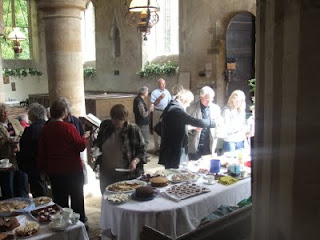 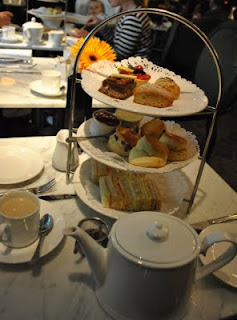 And who can visit London and not have a Hotel Tea?
Ours was at the Waldorf where we stayed
A curate filled with tea goodies and pots and pots of tea 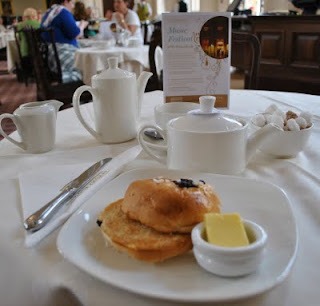 On our first trip to England, we visited Bath and had tea in the Pump Room
A memorable experience.
This trip we were once again in Bath
And back to the Pump Room
Tea this day consisted of a "Bath Bun"
instead of the full afternoon tea.

Our house, Blue Row, was in the Cotswold village of Swerford
After a day sightseeing, we often made it home in time for afternoon tea

As much as I liked our tea room teas, I really liked our Blue Row teas the best! 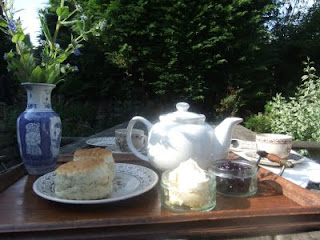 A lavender tea in the garden
Lavender scones, lavender jam and an Earl Grey with a hint of lavender! 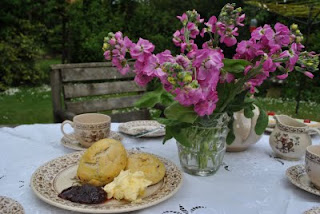 A full afternoon tea
with sandwiches, cakes and scones
And we invited a friend
A friend who also lived in the village
whom we met at the tea at Great Tew
It was fun to entertain at Blue Row! 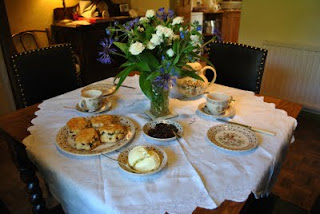 A cream tea at Blue Row
scones, cream and jam
Just the two of us! 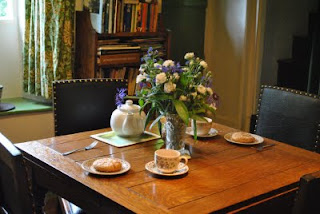 We'd been to Banbury but alas, we didn't buy any Banbury buns
But we did buy Eccles cakes
And that made for a great tea that afternoon!

It was fun to share my real English teas with you
and with The Tablescaper for
Oh, The Places I've Been
Posted by Martha at 7:07 AM

England is on my bucket list, I've been to Europe but not yet to England. This looks so wonderful to visit all of these different places at half past 3:00 for tea. I went to a tea on Saturday and had scones, cucumber sandwiches, other little desserts and lots of pots of tea. So fun.
Ann

Beautiful photos! DH and I have somehow fell out of the habit of stopping in the afternoon for (iced) tea and a bite to eat. I'm starting back today! Love your posts about the wonderful places you have visited! Have a grand weekend!

Yes, teatime is one of the best times of day. Now you've made me yearn for an Eccles cake. It's a good think I know just where to get one in Victoria!

Oh, I am in tea envy heaven looking at all these pictures! Cream tea envy heaven that is! Over 20 years ago I was in Cambridge for 6 weeks one summer and so I do remember wonderful cream teas in East Anglia also. What could be more delightful? Thank you, Martha!

Such an enjoyable walk down your memory lane. I loved each and every "tea" in England with you today!

Wonderful to have you at "Oh, the PLACES I've been!"

Oh, what wonderful treats. I always go for tea when in France or the UK. Not too many places here in TX for a proper afternoon tea. '-) Thanks for taking us along.
~ Sarah
PS. I'm having trouble with my blog updating on sidebars. I was told you had the same for a while. What did you do to resolve it? Would appreciate any help you could offer. Thanks! ~ Sarah

Oh I would love having each and every one of these tea experiences. I once visited the Cotswolds, but only had one cream tea. I must go back. Those tall scones look amazing.

Hi Martha, I so enjoyed reading about your time in England again. What a wonderful opportunity! Thanks so much for sharing.
Blessings, Beth

Martha,
I adore seeing all the places you were able to enjoy Tea while in England, dear friend!!!
I shall savor the Tea @ Linderhof for many a year to come!!!
Fondly,
Pat

You got to live in the Costwolds? How lucky you were! I was always a dream of ours to live in a small English village for a few years.