The Mis-Adventures of Doogie Doggie. . .

Almost two weeks ago
a dog appeared in our back garden
Dolly seemed to like him
And so he stayed . . .

He stayed
Without a name
For you may feed a dog
and he isn't yours,
But you name a dog
And he is!!!

Well before a week was up, we named him! 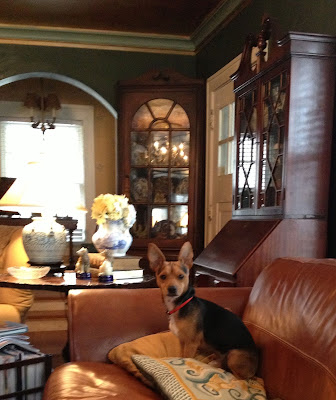 And I told his story HERE 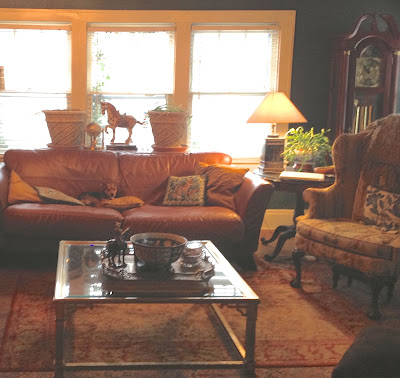 Is on the sofa

And his favorite guy
Is Husband Jim

When Jim leaves in the morning
for coffee with his cronies
Doogie "cries"
He's all alone
His "God" has left!

And so, three times
he's gotten out of our fenced back garden
Looking for Jim, we think

And twice he came back

But last Thursday
He was gone . . .
far longer than he ever had.

I even went out and undid some one of the places that we thought he got out of
thinking that perhaps he wasn't back because he couldn't get back in!

Most of the day passed
And no Doogie 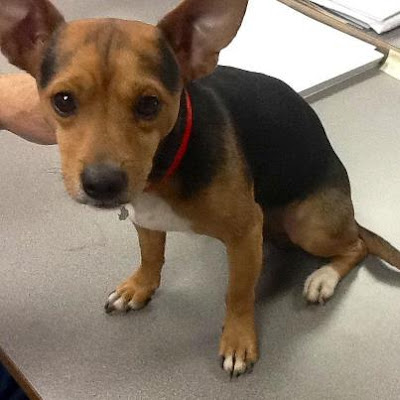 There was Doogie
with the following caption:

This little guy was found in the 12-13th and National Street Area. He had been hit by a car, but is ok. He is an adult male, wearing a red collar. If you know someone that lives in this area and is missing a dog please let us know.

It was shared by a facebook friend
from the page of Animal Care Center. 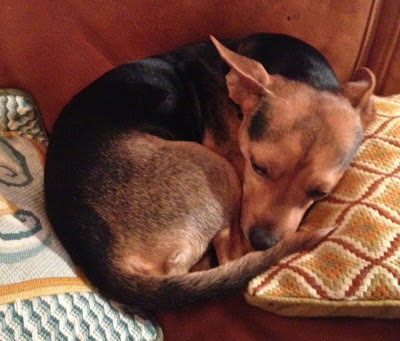 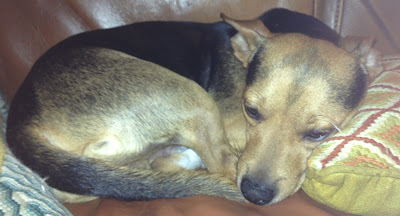 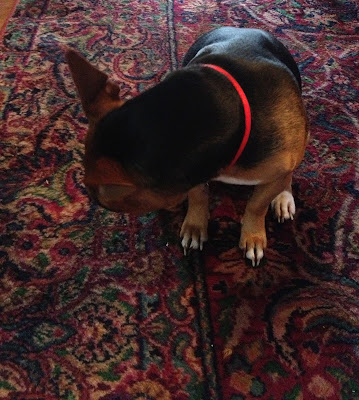 And, as usual, he is a bit camera shy 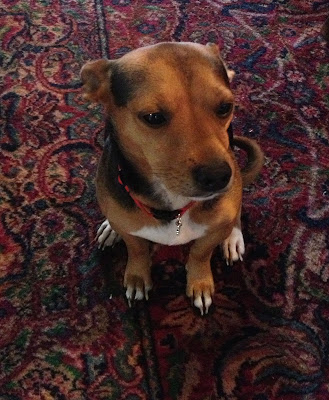 But with a little coaxing, he will pose.

He was in the street, a very busy street, unconscious and unmoving.
This man stopped his car, got out and put him on the parking so he wouldn't get squished,
thinking he was dead.

Before he got back in his car, Doogie moved and since he was alive, the man took him
to the vet to have him checked out for
Doogie was bleeding from the mouth and he feared internal injuries

he cut his lip on his tooth when he fell.
It must have been a concusion which caused him to be unconscious.

Saturday afternoon, Doogie and I visited the gentlemen
and brought him a big bag of Easter cookies.
A small payment, in our opinion, for his life saving actions.
For we shall be forever grateful that he saved Doogie.

He slept for about 12 hours
And then he was the old Doogie
Barking and jumping at squirrels with Dolly.

She enjoyed the day alone
(We sometimes thinks that she has a little talk with Doogie and encourages him to leave
So that it can be a one dog household again!) 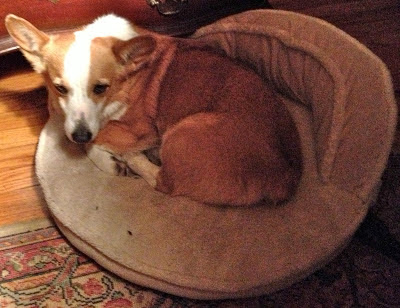 The Hub Bub left her tired
And so she retired to her bed,
leaving us to fuss over Doogie for a while.

Things are now back to normal.
He "talks" when Jim leaves each morning.
He and Dolly enjoy each other's company,
chasing squirrels in the back garden
(and he may catch one -- he can jump!)

And leaving messages for one another
And having a game as to see who can leave the last one
before you come back inside.

This is a reminder, if you see an animal that's been hit by the car in the street, don't run over them "again".   They might still be alive and have just been knocked out.

It's Wednesday and I'm sharing Doogie's Mis-Adventures with Susan at A Southern Daydreamer for Outdoor Wednesday.

I could hardly read Doogie's adventure without weeping...but so glad he is back home. For those of us that have canine family members it tugs at your heart. What a wonderful man to help!!

Oh, my! I'm truly glad that Doogie had a good Samaritan who helped him and the you were reunited with the newest member of your household.

Hooray for Doogie's Return. Someone abandoned an 8 week old puppy at my farm recently, and like Doogie, he was wearing a collar, but no tags. Tags can come off, particularly in a "trauma".....just writing your phone number on the collar with a Sharpie will help get them home.
Like Doogie, "my" puppy was given a name, and is now part of the household. Glad to hear Doogie's Great Adventure ended so well.

I am so glad little Doogie is back and ok. You have a knack for making a story very interesting, and such a cute pup! One of my little dogs so prefers men, and I wonder what his story is. Don't you wish they could talk?

Did the vet check to see if he had a microchip imbedded in his shoulder? Itmight give you a clue about where he came from. Sounds like he wants to stay with you.

Hi Martha, That is the best advise! I’m so happy you’ve found your new found friend and he is ok. That was such a gentleman to take Doggie to the vet, and lucky!
Such a sweet story............thanks for sharing it.

Martha! What a story! I am so glad that Doggie is fine and that the very kind man saved his life! YOur story really hit home. We have a little dog, Scamp, that we adore and the thought of him being left for dead is chilling!
Thank you for posting this!

I'm so glad he's back home and safe. Perhaps a collar with some ID are in order since he's now yours! It is amazing how much love the little furry creatures give us.

Beyond the Dog Dish said...

Doogie is very lucky 2x to find his way to you - it just must be meant to be! A very touching story. In situations like this, Facebook is a wonderful tool for networking. At all other times it's an evil time waster ;)

Oh wow , what a feel good ,happy ending story ! Doggie must have nine lives.. And Dolly is such a good girl for sharing a forever home with him.

Your story brought tears and smiles
to my face.. such a sweet doggie and I'm so glad he found you and the Mr.
Thanks so much for your visit
and kind words..
Happy April
Sandy

My heart was in my stomach until I got to the Happy Ending. Such a sweet little fella....bet he was terrified. Bless your hearts for this special adoption!

I think this is the beginning of an adventure for your home and Doogie. Thank heavens he was OK after being hit. Our little yorkie-poodle was hit once too but because she was so small like Doogie, she rolled under the car and had no major injuries.
Well, sounds like he's there to stay and you're now his new forever mom. :-)
Judith

Martha,
Whatever did we do before Face Book, dear friend???
So glad this story has a happy ending and that "Doggie" is home safely, at last!!!
Dolly will certainly keep him in line...she is the dominant canine! It's in her blood~line!!! And I am assured she will do it with great taste and tact!!! After all, she is a Linderhof canine, indeed!!!
Fondly,
Pat

Goodness gracious! Every time I am out of touch and I come back there is a new dog in the house! You are such a softie Martha..just like me. So happy everything turned out alright and all have been reunited.

He is a cutie...and those ears!