What A Difference Eight Years Makes . . .

Eight years ago
on a trip to Joplin
with a friend,
we visited a decor/garden shop
I'd not been there before
And I never went back
for a long time
And when I did, it was gone
But on that one visit,
I bought

These two pieces of iron fencing
I'm a sucker for iron
They were not that expensive
and I thought I could use them somewhere in the garden
(even though there were only two of them).

I never did really find a home for them
I shifted them from one place to another
But two small pieces . . .
They just didn't fit!

But I kept them
And I'm glad I did, because

And then I remembered the two pieces of iron fencing . . . 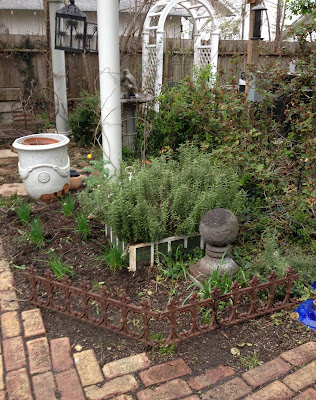 And it was a good solution.
Dolly  doesn't run through the bed anymore
(And neither does Doogie -- Dolly was a bad influence!)
And so I bought some chive plants to plant
for a bare bed is a sad bed! 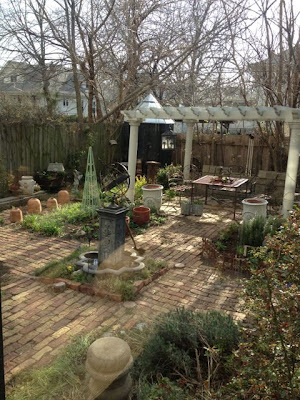 But it looked a little strange
One of the four garden beds
with iron fence.

Look what I found!
Except for being not quite as rusty . . .
They are a perfect match.

And you have to realize that it is eight years after I bought the first two!!! 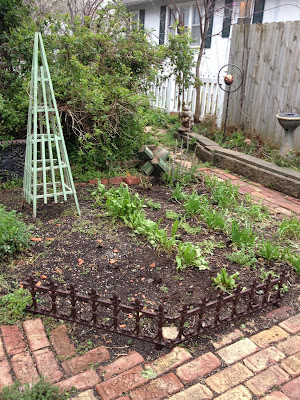 I put them catycornered from the chive bed
Bare dirt because the basil will go here when it warms up.

Catycornered because that made more sense to me

I like the look
it defines the beds a bit better
And it does keep the dogs on the brick paths.
Dogs, after all, can be hard on a garden!

In the "mail" today
Was also 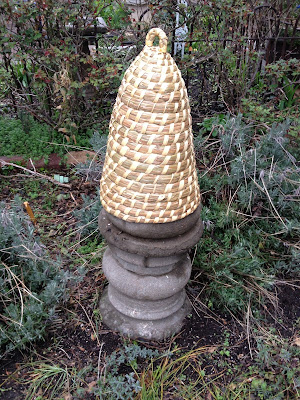 a new bee skep
My old one had weathered away.

It's a bit different
But every herb garden needs a skep

We placed the new fence and the bee skep in the rain
this afternoon after we got home.

We were chilled for it was a cool April day. 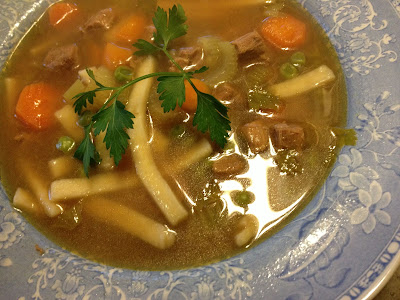 Beef noodle soup
Egg noodles in a beefy broth with chunks of beef and plenty of celery and carrots and a few peas.

It's Wednesday and I'm joining Susan at A Southern Daydreamer for Outdoor Wednesday.
Posted by Martha at 9:39 PM

The soup looks wonderful and the garden too! Those iron fencing pieces are perfect!

Such a beautiful herb garden --- and a yummy supper soup!

That's a beautiful garden you got there. Have a great day!

Your pieces of fence are working out great. Serves it's purpose of identifying the space, keeping the doggies out and just being pretty to boot.

Love your new iron fencing, I'm a sucker for iron too. The bee skep is great too. Mine is iron and showing signs of needing replacing too, it probably was not iron but a thinner metal.

You used your old iron fencing in the right way. It looks very nice.

I couldn't agree with you more... love old rusted iron fence! Like you I have just two pieces that never really quite fit anywhere because, as you said,you need more of them to make a statement in the garden. I love your solution and congrats on persevering and finding more on Amazon. Keeping my fingers crossed that they restock and you can complete your border!

That is awesome that you found a match. I love my little iron fences. I took a photo of each design and have them in my phone in case I come across more to see if I can match them.