A Small Change in The Living Room 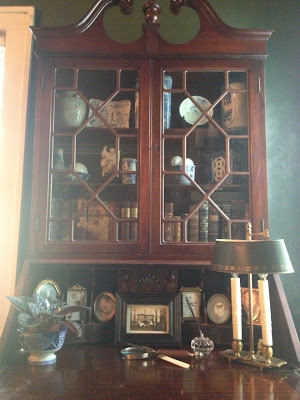 From the moment we brought it home, we've put the old small antique books on the bottom shelf
And blue and white on the top two.
Most bought by Husband Jim when he did his Air Force Annual Tours in Asia.
But some, were found here -- the jar on the left on the top shelf
The "brick" on the right on the middle one.
And our piece of ivory is there too
Brought home on one of those trips.

And the eggs -- they my great great grandmother's eggs
You've seen them out at Easter
the rest of the time they reside in the secretary. 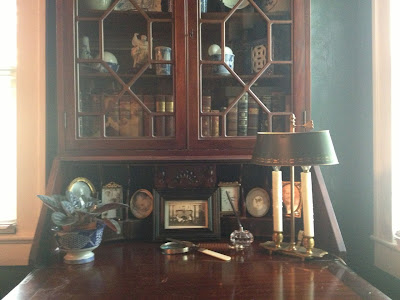 I've "neatened" the space.
Instead of birthday cards and note cards and bills and "to do's" in the cubbies
I've filled them with pictures
A lamp, because every desk needs a lamp,
a bouillotte lamp
a last year's Christmas gift from Husband Jim
not an old one -- a modern interpretation of one
from the 60's or 70's would be my guess
Bought by him at an estate sale
because he "noticed" that
I often looked at them
And that I had a couple!
It's the only one I've got with a metal shade
And a "fake" mechanism to raise and lower the shade!

The pictures are all in the small antique frames I collect.

A favorite is the middle one 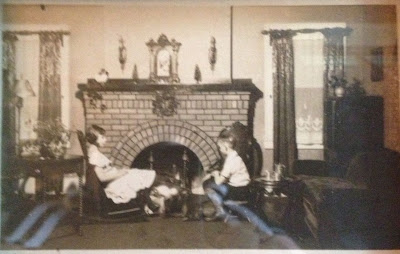 It's Christmas 1930 at Linderhof!
Given to me by the old man who was a little boy in the picture
when he came for tea one day.
I treasure it!

I'd love to see more of the room!

And the pictures on the left? 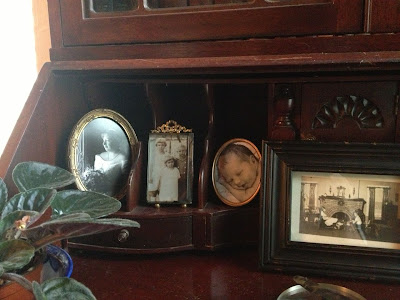 Daughter Sarah's wedding picture
My mother, my maiden aunt and their brother
taken around 1929
My precious Lucy

And the pictures on the right? 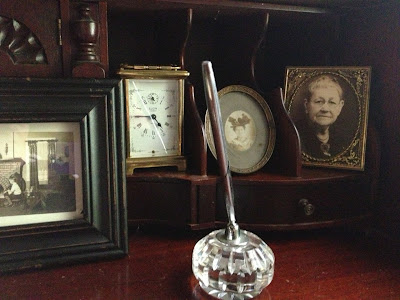 A wind up carriage clock
(and no, the face isn't broken -- that's a reflection from the blinds)
A relative of Jim's although we don't know who,
And Aunt Matt
(Martha was her real name -- I'm named after her!)

It's Tuesday and I'm joining Marty at A Stroll Thru Life for Inspire Me Tuesday.

The photos are very interesting and speak volumes! Lovely!

Wee Lucy is so sweet - I imagine you'll soon have pictures of her in many places!

What a beautiful secretary filled with treasures that each hold special memories. I very much enjoyed the "tour" of each shelf and cubby. '-)
I've always wanted a secretary. It's still on my list! One day the right one will come my way, but for now I'll enjoy gazing upon this beauty!

Martha,
Oh, how I do love to see the interior of your Secretary, dear friend!
Such a priviledge!
The Antique books are exquisite!
Have you read any of them?
The blue and white decor accessories are elegant to behold!
I love the way you've arranged each item!!!
The photos are charming!
Lucy is absolutely adorable!!!
Thank you for inviting us into the intimate details of your Secretary @ Linderhof!
Fondly,
Pat
P.S. Your re~arrange truly inspired me. . .the lower level Family Room is in the process of a complete make~over!!!

Pat -- yes, we've read some of them. Books ARE meant to be read!

Thanks for the sweet comments about Lucy!

I can't wait to see your complete make-over of your Family Room!

I love your secretary and I too have always wanted one. Not sure where I would put one though. There is definitely a family resemblance of you and your Aunt Mat and of course, Little Lucy is adorable. I enjoyed your close up tour of your secretary.

A marvelous display on your secretary. How neat that you have a photo of the house from a previous owner. Awesome.