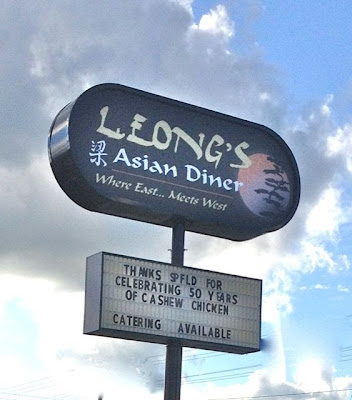 Started some 50 years ago by Leong
at his diner in Springfield, Missouri 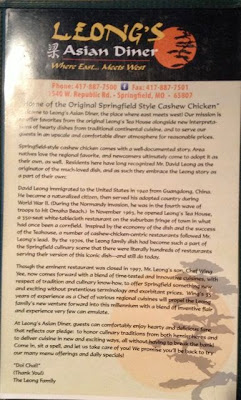 The story on the menu doesn't tell the whole story
It seemed that after Leong opened his restaurant in Springfield
that there were few customers.
He realized that the people of Springfield weren't familiar with Chinese food
But they did eat fried chicken
and mashed potatoes and gravy.

He therefore created a dish that he called
"Cashew Chicken" 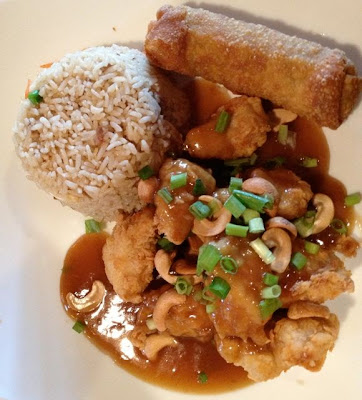 Chicken, deep fried
with "gravy" poured over all and cashews and green onions sprinkled on top.

His dish proved popular, the restaurant succeeded
And the dish spread not only throughout the Chinese restaurants in Springfield, Mo
but into other towns in Southwest Missouri
and soon spilled into Southeast Kansas.

Sometimes it is referred to as "Springfield" Cashew Chicken
to differentiate it from real cashew chicken.

Folks from other places who come to Springfield and order "Cashew Chicken" get quite a surprise with the dish they are served.

On the other hand,
we SW Missourians/ SE Kansans
who go out of the area and order Cashew Chicken
get quite a different dish than the one they are used to.

And even though other restaurants in the area serve Cashew Chicken
None really compare to Leong's -- the original!

Mix ingredients together for sauce.    Cook until the sauce is heated through.

Cook rice and drain.    Serve chicken on top of rice and cover with the sauce.    Top with crushed onions and cashews.   Serve 4.

It's Tuesday and I'm sharing Springfield Cashew Chicken with Marty at A Stroll Thru Life for Inspire Me Tuesday.
Posted by Martha at 10:36 PM

Martha,
I agree it's not the same Cashew Chicken throughout Kansas. The first time I ordered Cashew Chicken on our side of the Prairie, I was tempted to send it back. Ours is more like Orange Chicken...good, but NO gravy!!!
Thanks for sharing the recipe!!!
Fondly,
Pat

This sounds wonderful and we love Chinese!

Martha, I can't believe we've lived in Springfield 5 years and have never eaten this! We must have been scared of the words "deep fried" and "gravy"! Maybe we should take the plunge this week and try it!