The Survivors Come For Tea

As I breakfasted each morning, I'd look at the sideboard in the breakfast room
One shelf, it seemed, looked a little "wonky"

But I'd look again and it would seem okay.

Then Tuesday, as I was preparing lunch for my guests,
I heard an awful rack from the sunroom

A racket like a cat pulling a tablecloth (and dishes) off the table in an attempt to get
up on the table.
Except we have no cat.

I put down my knife
And went to investigate. 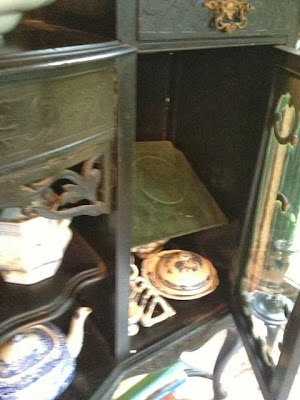 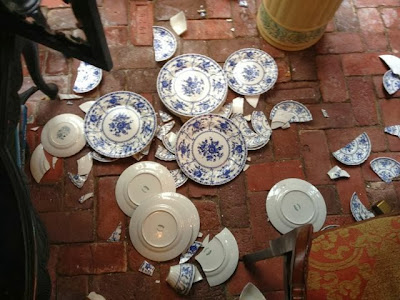 My Johnson Brothers Indies
lived on that shelf

And give way it did!

I had a service for six
I bought the first two cups, saucers and tea plates
on an early trip to England
along with a wee teapot, sugar and creamer 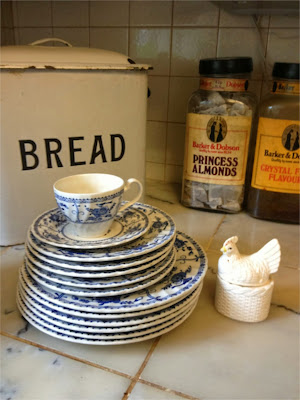 The little hen next to it was a gift from dear friend Jean
It's a salt and pepper and we use it sometimes for breakfasts.

I was saddened
And heartbroken

But company was company
In just a few . . .
So I flew
Put the survivors in the kitchen
Swept up the bits and pieces
And we had lunch
They, none the wiser of the tragedy that occurred just moments before.

Today, I treated the survivors to tea: 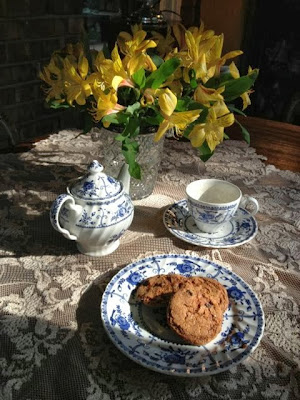 But thankfully the wee teapot was stored elsewhere
For it's rare and hard to find.

I've not decided what to do
Whether I will replace everything that's broken
or whether I will just get another cup, two saucers and a tea plate
like I had originally.

The shelf in the sideboard is still empty.
If I repair it and put anything back on it, it shall be my silver breakfast things
They may be dentable but they are unbreakable.
And perhaps not so much!

that was a lot of heft for a little shelf, I suppose.

I shall treasure the remains of my Johnson Brothers Indies
especially the little tea cup
That I hand carried home from England
And survived the crash of 13!

(Oh, the nosh is ginger cookies -- currant gingerbread they're called and I do like the addition of the currants.    It's getting cooler -- ginger cookies are so good in the fall!)

Oh my goodness, I am so sorry. I am heartbroken for you - broken china, especially memorable pieces - oh, so tragic.

I love your attitude, and I wish you well. I shall keep my peepers open in case I spy any on mu thrift outings!

Martha:
My heart is heavy for you - this has happened to me twice. Once, my hubby felt he could "easily move" a china just an inch. Hubby has broken a few things dusting too. I broke my English Alice and Wonderland teapot a few years ago doing a photo shoot for my blog.
Thinking of you and also sending hugs!

Oh Martha, I was so sorry to read this post. I think you need to add to them, IMO.

Martha, oh, what a sad occurrence! I've often worried about something like this happening in our cupboards and check the security of shelves frequently. I'm so sorry you lost so many pieces of your beautiful set. My husband recently broke one of my French faience plates. He felt terrible, but as I told him, "When one lives with pottery and china, there is always that risk." I hope you can find some replacements. I'll make a note of this pattern and keep my eyes open when I'm out and about. ~ Sarah
PS
My copy of Antiques from the Garden arrived just a few moments ago. I will have a fun evening. Thanks for the recommendation!

Martha, I was almost sick when I saw your beloved dishes broken on the floor. I'm so sorry. Your resilience is commendable, though! Your lovely tea setting with the survivors is beautiful!

This is hearbreaking, and I'm sure could happen to anyone. I feel sad for you to have lost many of your favourite dishes but give you credit for carrying on with company dispite the disappointment.
Judith

I'm so sorry this happened, Martha. I hope you will be able to replace them at a reasonable price. Take care, Beth

Oh no! I hope you are able to locate replacements.

My heart breaks with you.

I am so sorry to hear this...Anyone who loves their china would be! Plus I have about 10 dinner plates of that Indies pattern which we enjoy. Though nothing else from that pattern. But china can be replaced, once you decide what to do about it. I don't use mine nearly as often as you do, so there's much less chance of breakage. Still, the shelf disaster was not from usage, or I don't think it was. All will be well, and I hope, soon!

Oh Martha ... I would have sat down and cried...so sorry to read this

OH NO!!!! Not OUR Indies Blue china!!!!!!!
How terrible to see the broken pieces on the sunroom floor. So sad.

The Johnson Brothers are weeping.

I'll keep an eye out at my thrift shops for you.
Great photos, by the way. Love the table shot.
Love, Cass

So sorry -- I do feel your pain, as I have had a similar incident. I would probably start a quest for replacing them, since they are so pretty.

So sad. Sorry for the loss. They certainly went in a dramatic way!