The Bosses Come For Lunch

I write a weekly column for our local newspaper, The Fort Scott Tribune
Also called "Lines from Linderhof"
And it came first
It's similar to my blog except for a long time there were no pictures
so the stories were a bit longer.
Now, the stories are still longer than the blog
but there are pictures.

This week, I had my "bosses" for lunch
Floyd, who is the Publisher
Tammy, who is the Editor
Sara, who works her magic taking my words and my pictures and creating a splendid page

I was a bit nervous
for although I've talked to all of them
(and brought treats to all of them before)
They were coming, here, to Linderhof to lunch! 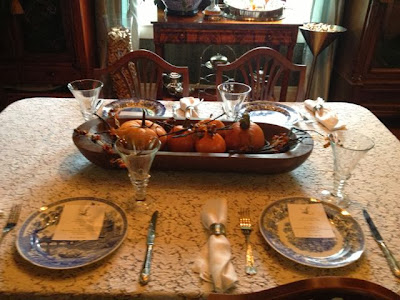 It's October, there should be pumpkins
And the dough bowl filled with pumpkins and bittersweet is perfect! 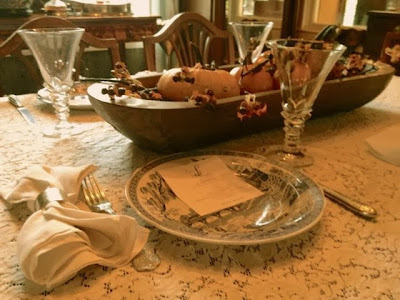 Lace and damask and transferware
A typical Linderhof table setting 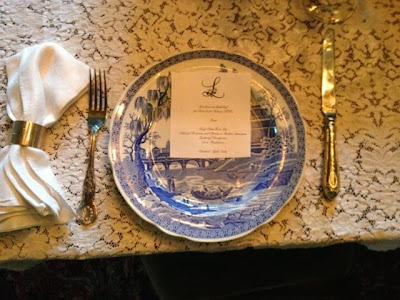 That's entertaining at Linderhof
whether luncheon or dinner. 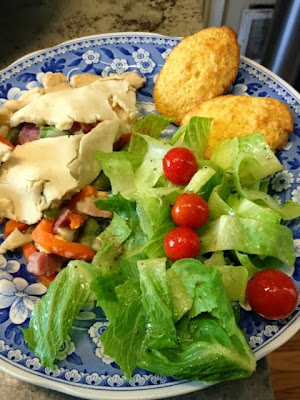 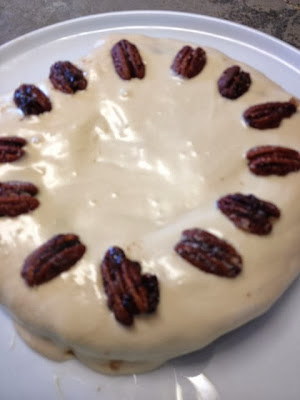 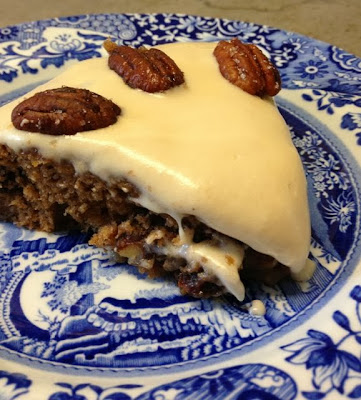 A cake that tastes of Fall
apples and spices and cinnamon and caramel!

The pie was simple -- ham (leftover is fine), a package of Bird's Eye stir fry vegetables with snow peas, carrots, mushrooms and onions and a white sauce with a touch of mustard in it.    Topped with a crust and baked at 425 until the inside is hot and bubbly and the outside is golden.

The applesauce cake was good and although I frosted it with a caramel frosting, I thought it would be as good if not better, served uniced and with a dusting of powdered sugar  -- for morning coffee or afternoon tea.

Oh, if you want the recipe for the Applesauce Cake, you'll have to buy a copy of Saturday's Fort Scott Tribune!

A beautiful table and a delicious menu. I trust they appreciated it.

Lovely table with your beautiful Spode dishes in blue and White! How wonderful that you write a column for your local newspaper, wow! The menu sounds amazing and I love your dessert. Big hugs,
FABBY

I betcha you wowed them with all that delicious food and pretty setting. I hope you get a raise, lol. Love your Spode dishes!...Christine

I feel a raise coming. Your bosses were blessed to sit at your table. The dough bowl made me smile. I've had mine out...looking at it to come up with an idea to use it for a centerpiece. Thanks for the inspiration! Cherry Kay

Lucky bosses. They must be patting one another on the shoulder at having you writing for them.

The food looks as yummy as the table...

How could they NOT have been charmed :)

Wow I bet they loved the meal, it looked delish...the dishes were lovely and the entire setting and ambiance is just wonderful, you always do a beautiful job.Phyllis

Oh, I'll bet your guests were so impressed! The table looks beautiful (love that centerpiece!) and the food delicious - what could be better???

Oh, I'll bet your guests were so impressed! The table looks beautiful (love that centerpiece!) and the food delicious - what could be better???

It all looks soooo yummy, Martha!!! Ditto what Pondie said. They are probably counting their lucky stars to be working with you!