We've been gone
For a month!
Arriving home late in the evening
two days
before Husband Jim's birthday

The group which we call
The Cape Codders
all came.

A busy day
Cleaning the very dirty house
(Somehow the "Cleaning Fairy" didn't get my memo)
and a dinner for 8. 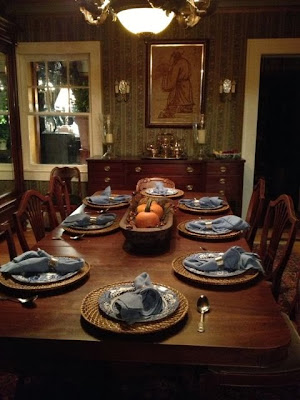 And a simple table for a simple meal 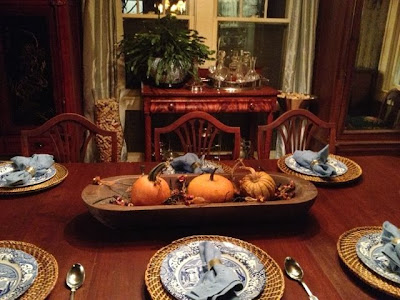 The old dough bowl with the Fall pumpkins as the centerpiece
Rattan chargers instead of a tablecloth
Soup spoons only,
A Spode blue Italian plate
And well worn blue hemp napkins in silver napkin rings 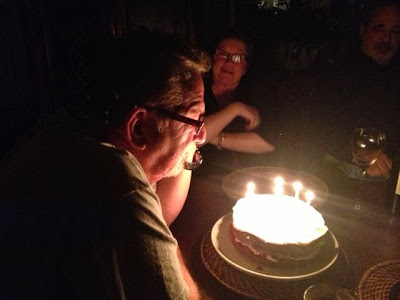 There was cake
(and ice cream)
The 40th red velvet birthday cake that I've made for Husband Jim
It's tradition!
(It did take me a few years of marriage before it became
the birthday cake)

But ever since on November 18, I've made one.

Alas, there aren't the proper number of candles on the cake
I didn't have that many and I'm not sure there would have been enough room on the cake top!

The middle candle represents the six decades
While the candles around the edge represent the years.
That plan saves us from having to call the Fire Department!

Sounds like all had fun and enjoyed even if it wasn't a total surprise!

Beautiful table -- hope your husband was delighted....(if not surprised)....may all his birthday wishes come true.

Happy birthday to Jim! Chili is one of my husbands favorite meals, too. I love the simple earthy feel to this table setting, with the wooden dough bowl and the rattan placemats.

Happy Birthday to your husband! I know he enjoyed the "almost" surprise - lol! I love the napkins hat you used - they look wonderful with your blue and white china.

A very Happy Birthday to your hubby who I am sure knows he is married to a chef!

It is so nice to see a table and not a piece of fabric for a change. Wonderful blue dished, my favorite color. Have a great birthday Jim, be nice to the wife.
Pam

Many happy returns to Jim. Sounds like a great party! xoxox

Those are the best parties.

Glad to have you back.