Growing up, everyone's Dad was a GI
Except mine

Oh, he went to war all right
But it wasn't WW 2
it was "The Great War"
now known as World War I

As a remembrance of his service 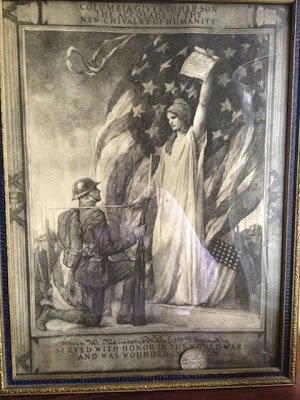 Not every WW I vet received one of these
Only the ones that were wounded.
For in "The Great War" there was no Purple Heart
That came later
That came in World War II

Dad was wounded in the Battle of the Argonne Forest
the papers say "slightly"
which I don't really understand.

Perhaps he was wounded and patched on the battlefield
And sent back to battle once more
rather than having to be transported to a Field Hospital
and considered "really" wounded!

Dad always told me that he had been hit by a cannonball.
As a child, I believed him
But as an adult, I know that that was impossible.
Shrapnel perhaps, but not the ball itself.

And before, he was sent to France,
Dad also was sent to the Mexican Border
at the time of Pancho Villa.

He never mentioned that part of his military.

Dad was my hero
And I was proud in a sea of GI kids, to be the lone child of a doughboy

It's Veteran's Day
The day we honor all veterans,
The day I honor my Dad
My favorite veteran!

Wonderful to share your father's military experiences. Thank you!

I can see how your Dad was your favorite Veteran.
HERO.
He is a HERO!

Wonderful that so many men were heroes so we can have the freedoms we have even today. My Grandpa was in the Navy in World War I.

What a great tribute!