I had long been in love with 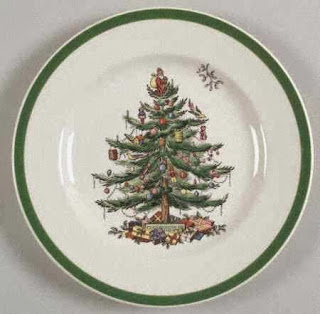 Spode's Christmas Tree
pattern
It's been around "forever"
Well, actually since 1938
which is a long long time for a china pattern.
Few, can celebrate it's 75th Anniversary
as Christmas Tree does this year

and if you want china, rather than transferware 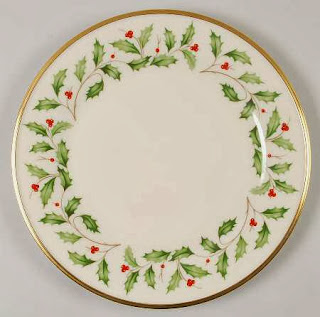 Lenox came out with their Holiday pattern in 1974
And for a few years
Those two were the Christmas china patterns
available at the "good" shops.

I longed for a set of Christmas Tree, but I couldn't justify the cost
to use just for
one day

But then I read in a Holiday shelter magazine about a homeowner
whose holiday decorated home was featured
including a beautiful dining table set with
Spode's Christmas Tree
that she used hers from the first Sunday in Advent through Christmas.

That, I reasoned would justify the cost.
A whole month of use -- not just one day!

And so I started to scout the Christmas china.

Alas, however, Husband Jim did not like the Spode Christmas Tree
(my choice)

On a trip to Hall's in Kansas City, we noticed that more companies
were manufacturing Christmas dishes.

Including Royal Doulton,
who introduced three patterns in 1986 -- 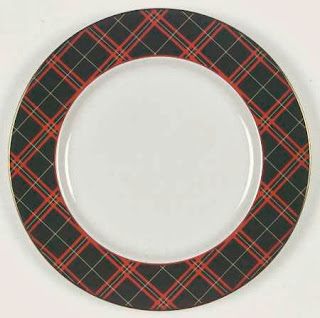 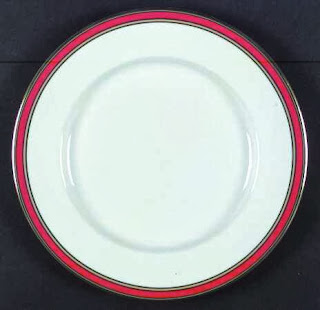 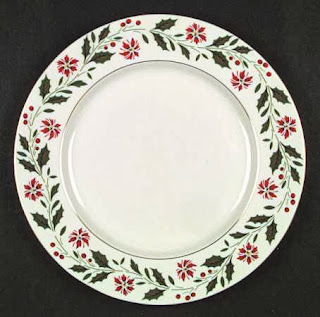 It was the start of "mix and match" for all three patterns could be used together.

Husband Jim favored the Tartan
His heritage after all is Scottish.
I liked it for the fact that it didn't scream "Christmas" and actually could be used at other times!

But it was expensive and if we were going to buy it, after Christmas at half price
was the way to go!

In the fall of 1988, we took a trip to England
And while in England, we visited the potteries at Stoke-On-Trent
Wedgwood
and
Royal Doulton

And at Royal Doulton we visited the seconds shop.
There in baskets on the floor were plates, cups and saucers
in Tartan, Ribbon and Holly.

I bought 8 plates, cups and saucers of Tartan
All for $8

(And I could kick myself to this day for not buying 24 of each!   Duh!
It was certainly a "I was not thinking" moment.
But I guess I counted dining room chairs and bought a plate, cup and saucer for each!)

I have since bought enough Tartan so I can serve 12
And I paid more for each of the additional 12 additional pieces than I did for the original 8!

Several years later, I decided that dessert plates would be nice
but, alas, Tartan ones were either non-existent or very costly
So I bought 8 Lenox Holiday ones.
They looked pretty with the Tartan
And since, I have added 16 more so that I can serve 12 salad and dessert on the
Holiday plates (without washing!)

We use the china from the first Sunday in Advent
through Christmas.

I take 2 cups and saucers, 2 plates, and 2 dessert plates
and put them in the kitchen cupboard
I also get out the mug I bought for Husband Jim
(who doesn't really like cups and saucers)
and the wee Christmasy creamer and sugar

We use these every day for breakfast, lunch and dinner.
The rest of the dishes remain in the armoire
in the dining room
ready for when we have company.

And Monday I had company for lunch
from Nevada

A holiday lunch with the holiday china 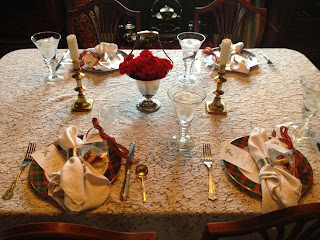 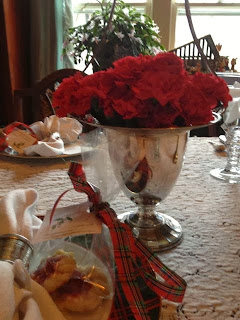 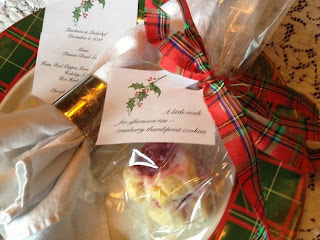 A menu at each place, a damask napkin in a silver ring, and a gift bag of cranberry thumbprint cookies
for their tea nosh that afternoon

Since it was the Monday after Thanksgiving weekend,
I felt that nothing related to turkey, cranberries or turkey 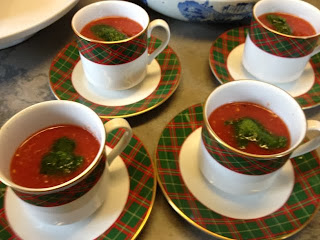 Tomato soup with pesto
(Since I don't have soup bowls, cups and saucers make a wonderful soup holder for lunch) 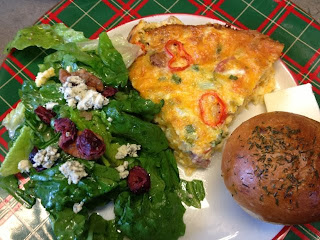 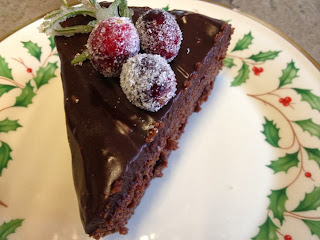 Chocolate ganache cake made festive for the holidays with sugared cranberries and rosemary.

This is the china's 25th Anniversary
And we're so glad that all those many years ago,
we happened upon the Seconds Shop at Royal Doulton!

It's Thursday and I'm joining Susan at Between Naps On the Porch for Tablescape Thursday and Cuisine Kathleen for Let's Dish.

All The Pretty Dishes said...

I especially love the plaid dinnerware because it is so different. The food looks great too!

I love to mix and match. You're right about justifying purchases. :-) All of your china patterns are beautiful, and I am partial to Royal Doulton - love that tartan! Your table is perfectly lovely!
Blessings,
Kim @ Curtain Queen Creates

Love all your Cmas china. I have Lenox Holiday, Tartan and Christmas Eternal, as I have an outlet and can get the plates for 8 dollars. Then I have several sets of everyday Cmas dishes. And yes, I switch them out the day after Tgiving so they get used!
But really, people think I am crazy to have sets of so many different Cmas patterns! :) Can't resist!
Thanks for linking to Let's Dish!

Isn't it fun to have dishes just for this time of year? Like you, I use my Christmas dishes from the first Sunday of Advent through to Epiphany.
Your table looks beautiful!

The Royal Dalton Tartan plaid is really lovely. I would love to find a set of those. I love Christmas and I really love Christmas china. I did find a set of Spode Christmas Tree last month at the Volunteers of America store by my house. I have not used them yet but I will sometime in the next week or so. I really have way to many holiday dishes, so many now that there are not enough days between Thanksgiving and New Years to use them all. Storage has become a real problem. I think I need to start selling some on Ebay.
Have a great day.... Candy

Wonderful purchase all those years ago. Lovely table!

Love hearing about your Christmas china. At this time, we have holly decorated dessert plates and holly decorated glasses for our festive ware. If I ever spot that china in a second hand store, I'm grabbing it! I like the tree too, but like how you've found a compromise and use it all season. Beautiful!