An Affair with Blue and White

As everyone knows
I have a love affair with blue and white
Asian or English
It doesn't really matter
It's everywhere at Linderhof!

And whenever I go out and about,
I'm always on the lookout for more!

I found treasure
at a flea market!

I have many blue and white bowls
Some big, some not as much
And I really don't buy every one I see but . . . 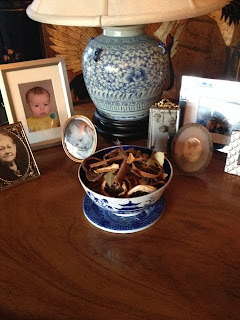 This is a good size for tabletop
Next to the chair which is next to the fireplace
Filled with my homemade winter potpourri
(dried apples, oranges and lemons, star anise, bay leaves, cloves and cinnamon sticks)

For about a year and a half ago
I bought at the same flea market the bowl and pitcher.
I loved that it had birds on it.
I'm a fool for anything blue and white and a bigger fool for anything with birds!
It was pricey but I did bargain and got it for what I felt was a good price.

However, I left the slop jar
For it was way too much, I felt

Which is why, every time I went, it was still there
And I would mull . . . but it was too much for a "sit around"
(even though it dates form the 1880s and is from England!)
And it was the old "I didn't need it"

The slop jar was marked down $25 from it's original asking price
And yes, that booth had 50% off
I grabbed it up, rushed to the counter and paid my pittance for my treasure!

It is good to see them re-united! 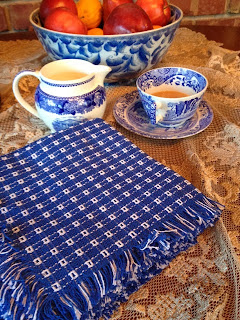 I ordered some of these handspun blue and white cotton ones
from Vermont Country Store
(a place I adore -- they have things you cannot find anywhere else!)

And for those of you who may remember
this disaster 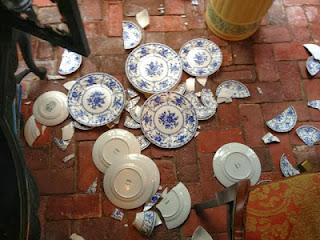 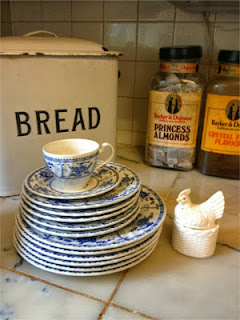 The first two cups, saucers and tea plates as well as a
wee teapot, sugar and creamer
were hand carried over from a trip to England
20 years ago

I decided to keep the dinner plates, the "odd" number salad plates
And add just one more cup and saucer, a saucer and a tea plate
So that I would have my "original" tea for two 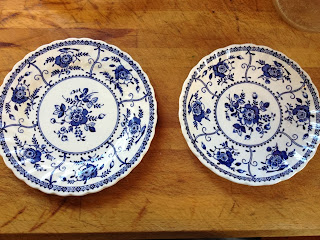 The saucer and tea plate arrived today!
And I shall use them for tea this afternoon!

It was not as cold as it was last week,

However, Doogie is a "cold blooded" dog
He managed to wrap himself in an afghan
and with his head on his pillow and his paw on his bone . . .
He was settled in for the evening!

Oblivious to my excitement over my new blue and white!

I'm nuts for blue and white too and recently came home with nice lidded jar and a small bowl. Both were bargain finds at a thrifts. It's difficult to leave them behind when they are such a good price. Glad you reunited the third piece to your group and that you solved your dilemma. I just read that January is national tea month. You can enjoy tea for two to celebrate. ;-)

Blue and white make my heart sing too, Martha. I'm so glad you were able to take the slop jar home - you needed to have the three pieces!
How awful about your Johnson Bros china - terrible!

Martha,
Love, L O V E, LOVE all your blue & white, dear friend!!!
Sorry about your mishap with your precious set, but we always seem to make the best of our disasters...no matter which side of the Prairie we reside on, don't we, dear one!!!
Doggie...too, too cute!!!
Fondly,
Pat