I even have a bean pot
And have had "forever"
But I've never baked beans in it.

Canned pork and beans, drained
And brown sugar and catsup and onions and bacon and molasses and BBQ sauce is added
Poured into not a bean pot
But a casserole dish
And baked fairly slowly until thick and gooey.

And we take dried beans
soak them overnight in boiling water
Add them to a pot with a ham bone, a chopped carrot, some onion
and perhaps some herbs
And the whole simmered on top of the stove
Until done.

The ham, taken off the bone and added back to the beans
And eaten with warm cornbread.

But New England baked beans,
I've never eaten
nor have I ever made
Even though that bean pot has taken up valuable cabinet space
for about 40 years.

But, every January, when I clean cabinets, closets and drawers,
it always makes the cut
And stays.

For one of these days, I think, I'll use it to
make New England Baked Beans.

We had snow this week
Snow days are good days
for beans.

I had several recipes to chose from,
I chose one in
The Tasha Tudor Cookbook

And dinner that night -- 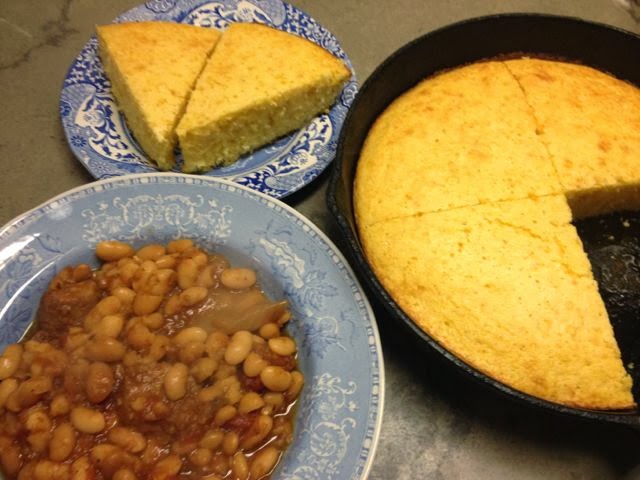 I kept the midwestern tradition of serving cornbread
with the beans.

They were good,
I'd make them again
But I think I'll try a new recipe next time 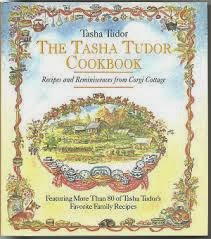 Tasha states that she got the recipe from children's photographer and friend, Nell Dorr.   Nell Dorr, Tasha writes, gave memorable supper parties . . . her famous baked beans and homemade bread were always served, and no other baked beans can compare.

Wash and pick over the beans, then parboil them until their skins pop when you blow on them.    Drain, cover with fresh water, add a pinch of baking soda and simmer until the beans squish when you pinch them.    Drain.

Cover the beans and bel them all day in a slow oven.    About halfway through baking, taste for seasoning.   Be careful not to overdo the brown sugar.    Stir the beans 2 to 3 times during baking.    If the liquid boils away, just add more tomato juice making sure to keep the beans covered during baking.     Bake for about 8 hours or until the beans are tender.

It's Friday and I'm joining Michael at Rattlebridge Farm for Foodie Friday.
Posted by Martha at 9:38 PM

Well you have certainly made me hungry. Southern traditions serve corn bread with beans, any kind of beans. Love them. We certainly serve our share of baked beans with BBQ too, only usually it’s canned beans. I love this cookbook and I may have to try the slow cooked recipe here. We are having the perfect weather for it, snow!
Have a great weekend............

Ah, snow. They don't do snow very well here in Atlanta. Just a few flakes and everyone clears the city.

Now you have me aching for baked beans. I bet the daubiere would be a good alternative!

It would! It would! I'm still trying to decide whether or not to make your Meyer lemon poundcake -- Meyer lemons are on my list of market items today.

How interesting to hear about Tasha Tudor...haven't heard about her for years. She always fascinated me, because I truly think she was reincarnated from a woman in colonial times. The way she lived her life, the cooking, the gardening, the sewing, and making do. A very interesting person. Plus, she loved Corgis, and how can you go wrong with that?!

You have gotten me thinking about doing a post on baked beans as well! I have a recipe, very very simple, from the real New England…Maine! Every summer we went to my mother's family place up on the lakes, cook, guide, caretaker included. And every Saturday night we would be required (I say it that way, because as a child it was awful!) to eat baked beans and hot dogs…but the hot dogs were some local variety, long and bright red and with very tough skin. I hated it!! But now, I have inherited the cookbook and bean pot, and the camp in Maine is no longer in our family, and I wish I could go back again!