Moomie's Buns are legendary on the internet
Millions have tried them.
Legend has it that a poster on the King Arthur Flour board shared the recipe
Her "board name" was Moomie
And that's how the buns got their name!

I've read about them and the raves that both the makers and eaters have given them
on a few boards that I visit.

But had never made them.

Then, when son-in-law, Andy, needed a homemade slider bun
for his Men In The Kitchen Competition,
Moomie's Buns came to mind. 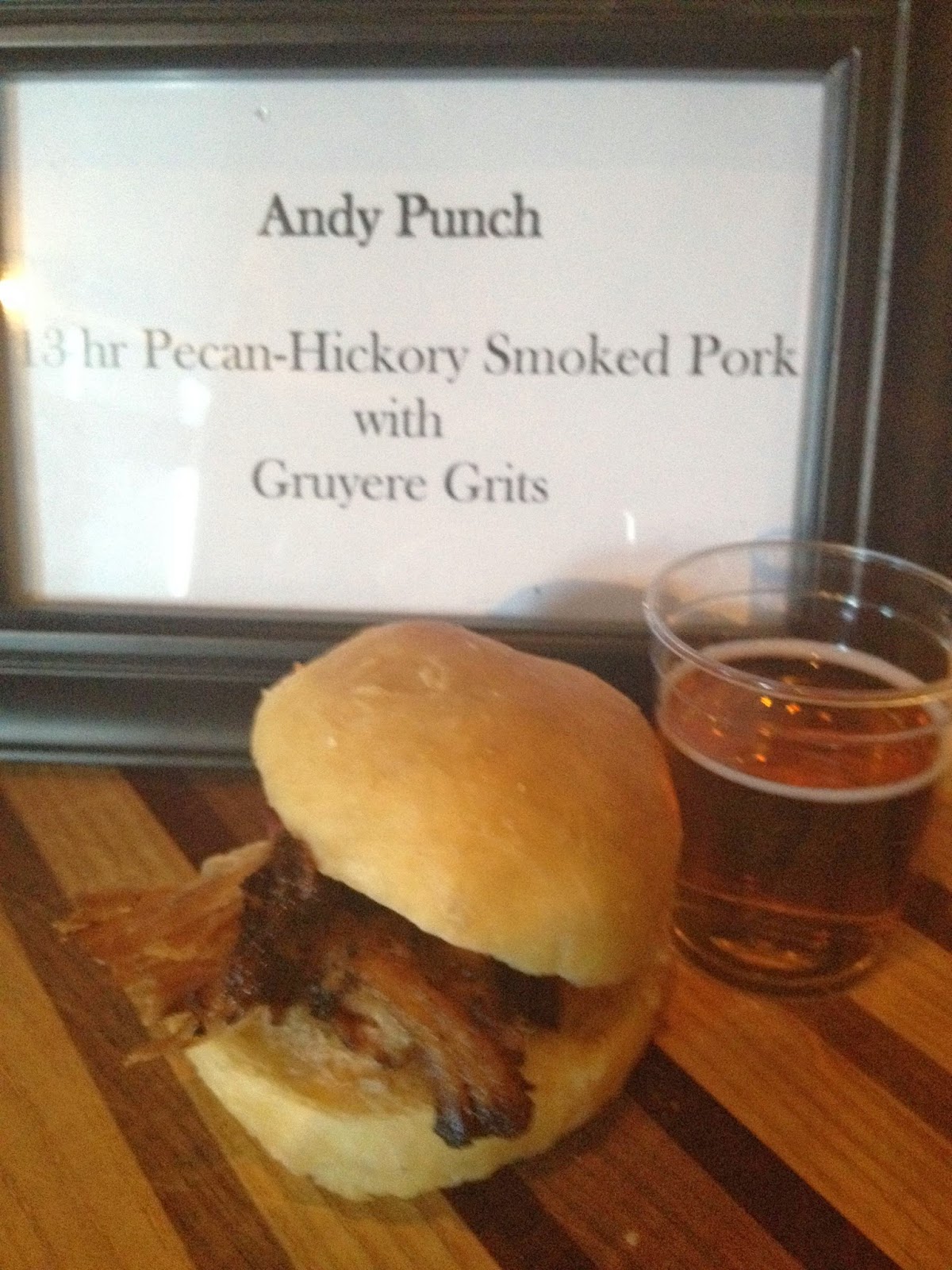 And they were perfect for his 13 hour pecan-hickory smoked pork sliders!
So much so that he was named the "Chamption" Man in the Kitchen
So now I guess Moomie's Buns are also award winning!

Yesterday, I tried them for the first time 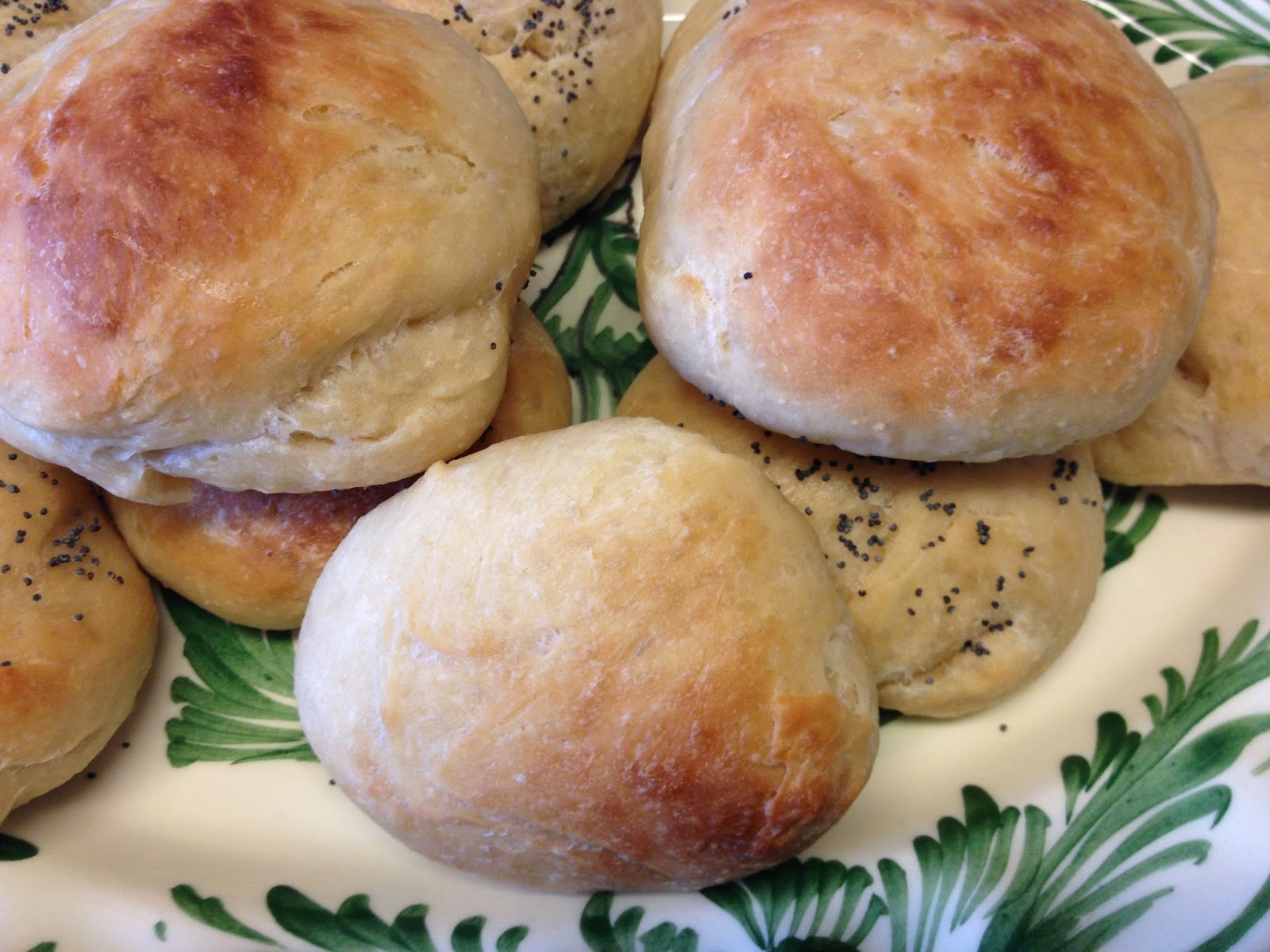 Some I sprinkled with poppy seeds
But most I left plain.

And although we have some of that award winning
13 hour pecan hickory smoked pork in the fridge,
I chose to serve what we call "Nu-Ways" on Moomie's Buns 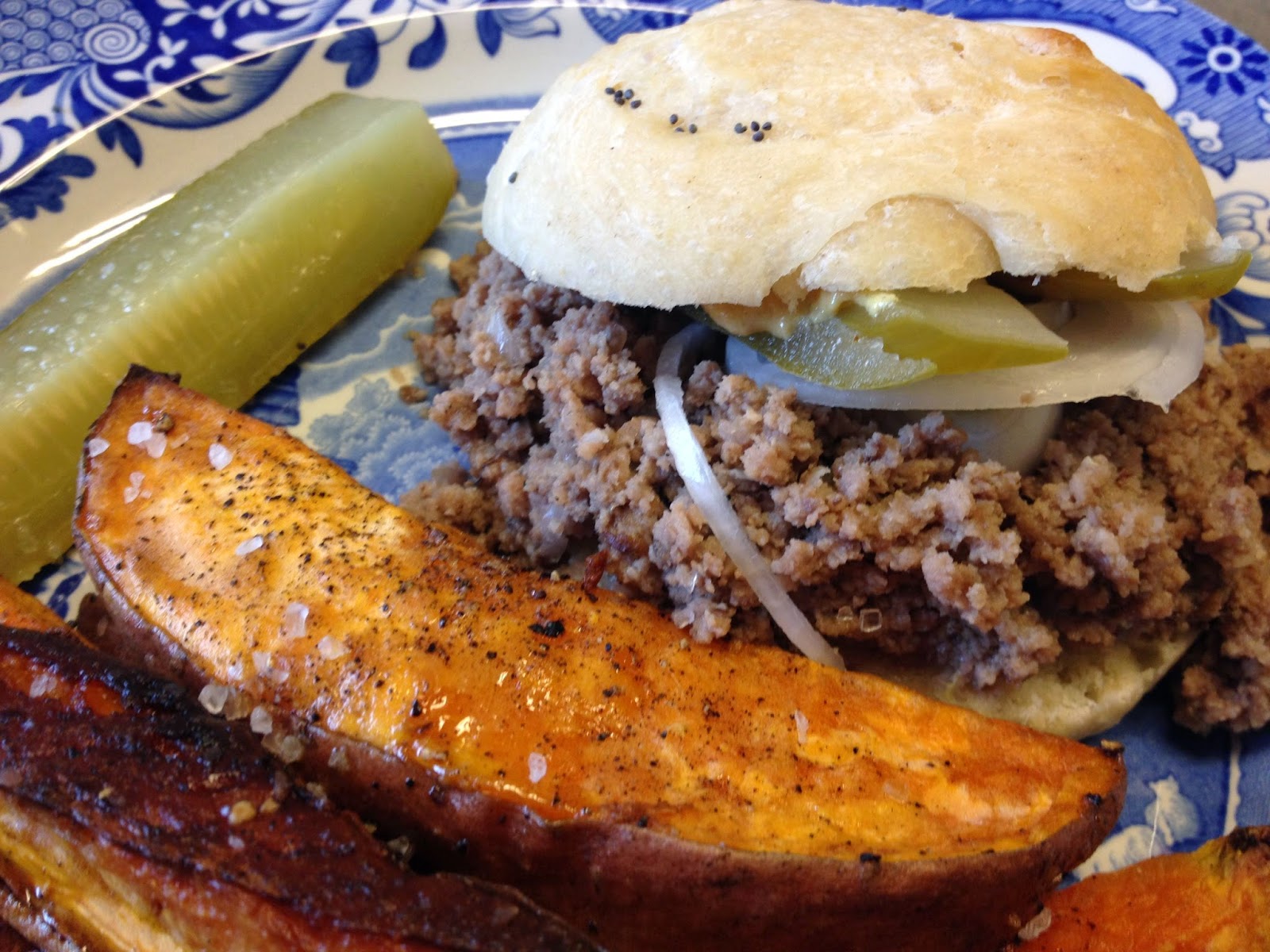 It's a "loose meat" sandwich which we always ate at a drive-in called "Nu-Way".
I'm told it's a cousin to a Maid Rite
Years ago, the recipe appeared in the Kansas City Star and I clipped it.
I make sloppy joes more often than Nu Ways although I'm not sure why.
It's a great sandwich and I always serve it the Nu-Way way -- with onion, mustard and pickle.
Last night, I also served it with oven baked sweet potato fries.

And at Linderhof,
it is becoming Spring!

There are pansies in the planters,
And tulips in vases
(but, alas, not our tulips -- they're from the market)
But the redbuds are budding
So I brought some inside . . . 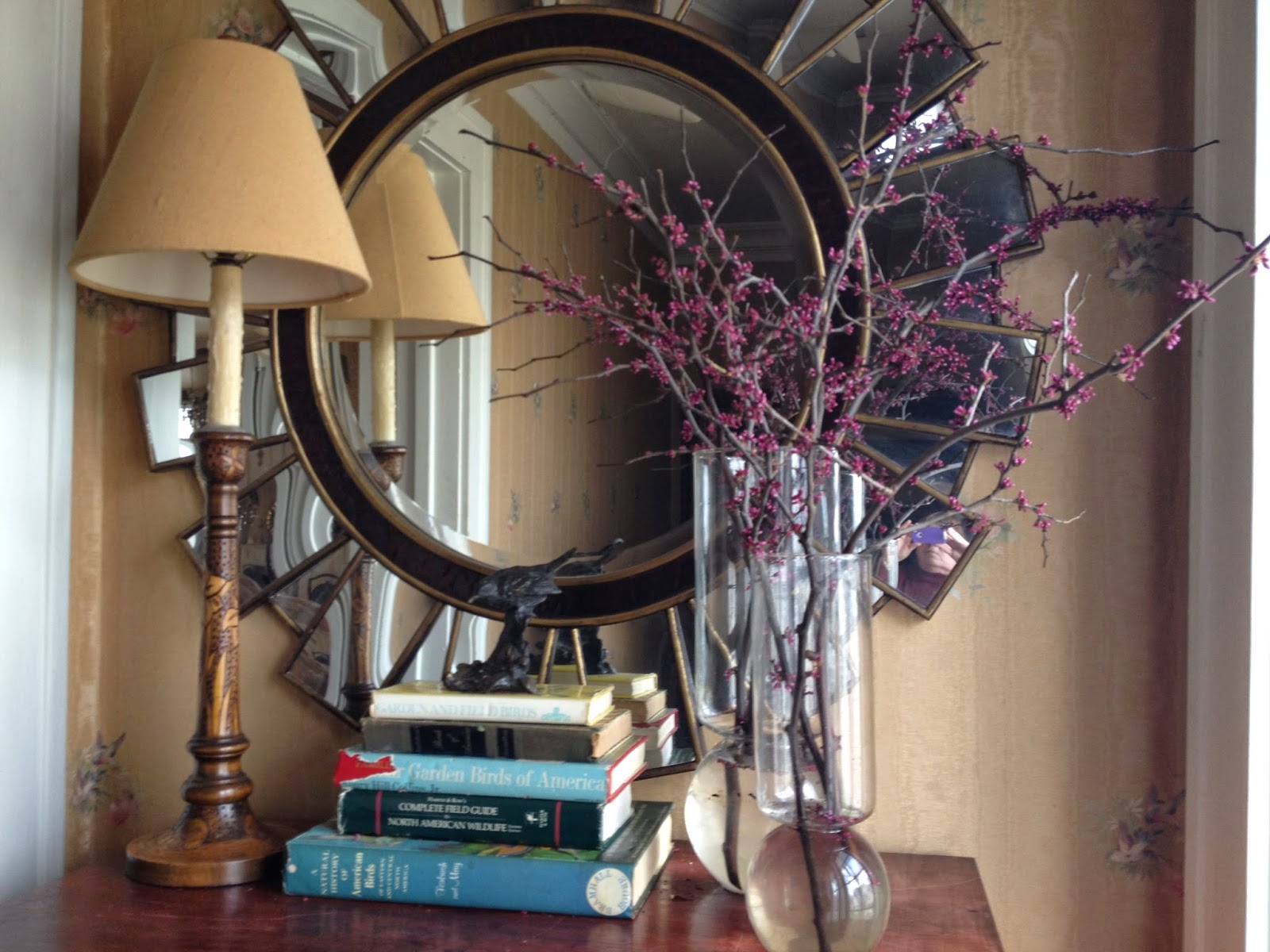 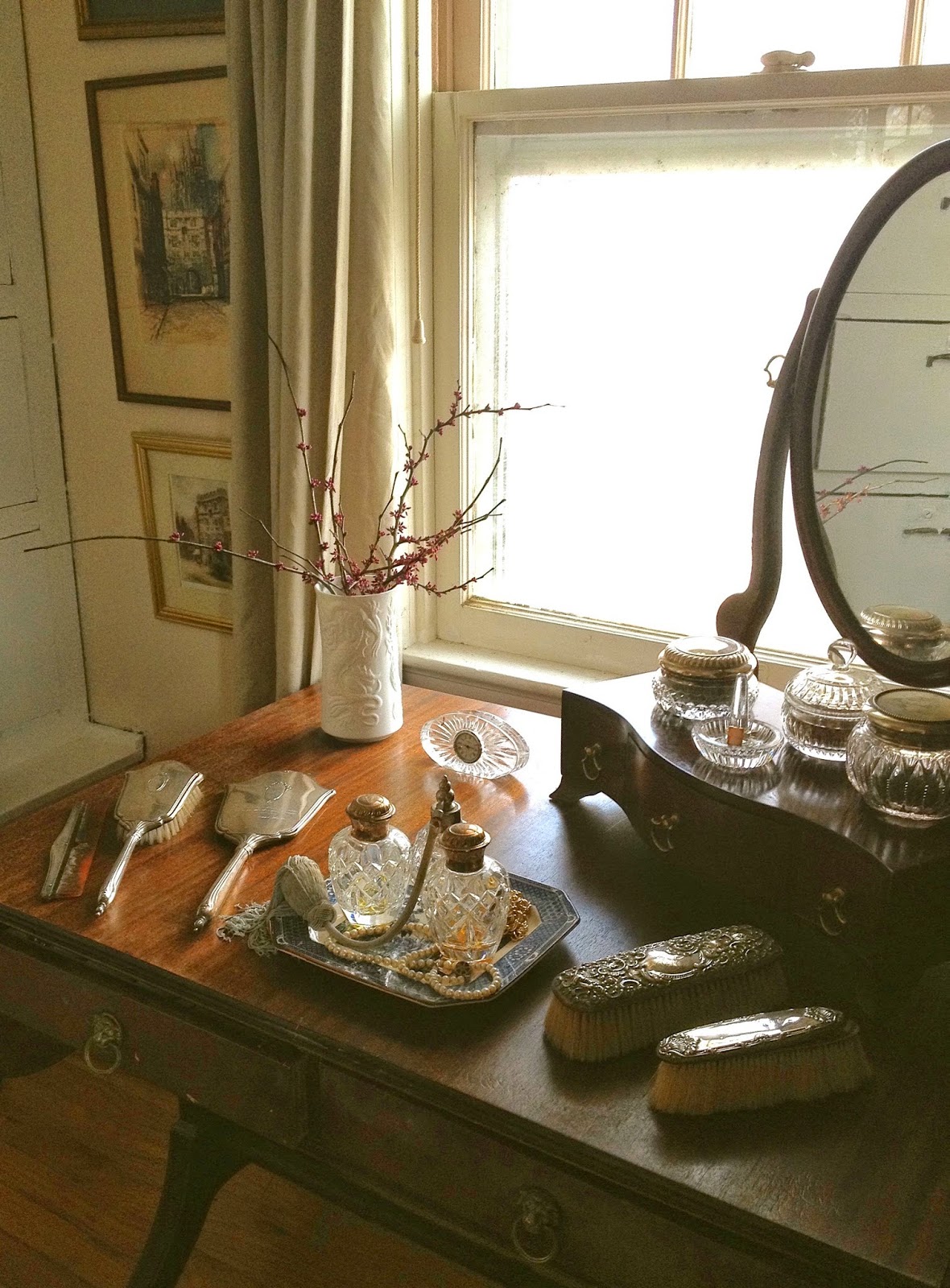 And in a favorite vase on my dressing table

It's Lent, not Advent 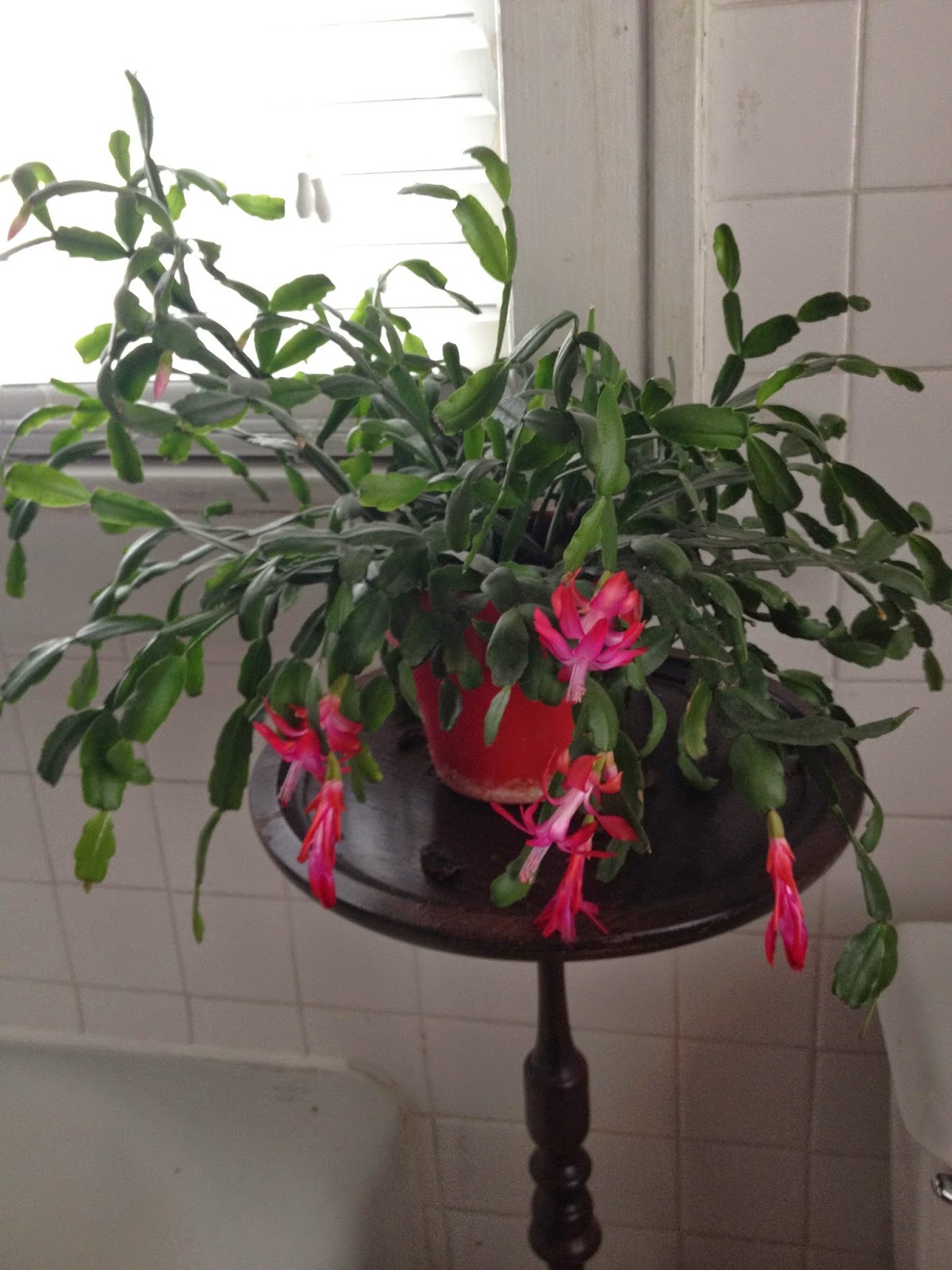 But this cactus is blooming.
A gift from a friend from her old cactus.
It's never bloomed before
So perhaps it's an Easter cactus rather than a Christmas one
We first came across the Easter variety when we made that Lenten trip to Germany
(the one where we bought the eggs for our Easter Egg tree)
I'm as happy as can be to see it's blooms!

The sandwich fill is easy to make and you really don't have to make your own buns.
From the Nu-Way drive in in Kansas City:

Place ground chuck in a large iron skillet.    Add water until meat is mushy, then press out all the limbs.    Add bouillon cubes for extra flavor and cook until very little moisture remains in pan.     Drain off excess fat.

Spread the bottom of a large bun with the mustard and add several pickles.    Place meat on the bun, salt and pepper to taste.    Add the onion.    Keep stirring meat as you make additional sandwiches.

Sometimes I make the whole batch, but often I just use a pound of hamburger.    Or you can make a whole batch and freeze the extra if you're a two person family like we are!

Seeing your red buds gives me hope that ours will be soon.
The cactus is very pretty. I just let mine bloom when it wants and it has changed time from Jan-Mar.

I have never tried the Moomie Buns either but maybe it's about time I did. That sandwich looks delish as do the sweet potatoe fries. I noticed you added some sea salt after they roasted, YUM. I would love to have the recipe for the pork???

My Redbuds have already bloomed out and I too brought in stems to enjoy indoors. I love the architectural interest they have in a tall clear vase.

I think I will have to make these buns and meat very soon. It looks delicious!
The blossoms in your vases is a delight.

Nu-Way! I forgot all about that place! Thx for including the recipe. xo, M