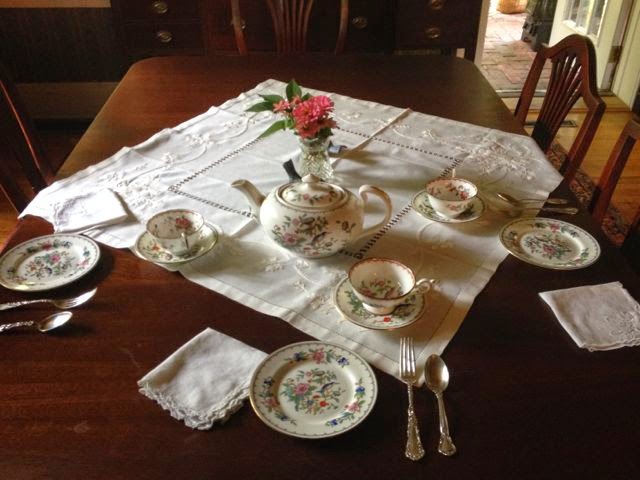 The table, set with an Italian cloth
And the Pembroke china including a tea pot (which for dessert turns into a coffee pot) 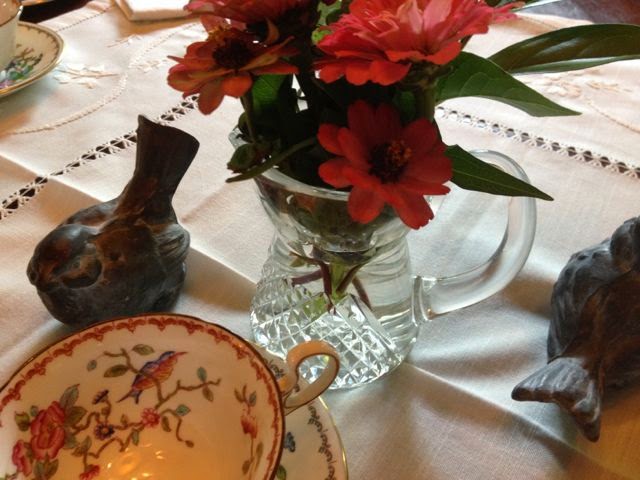 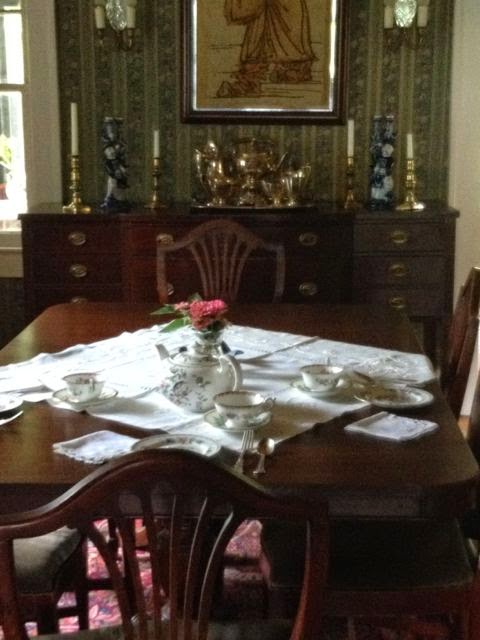 Table set and waiting for company 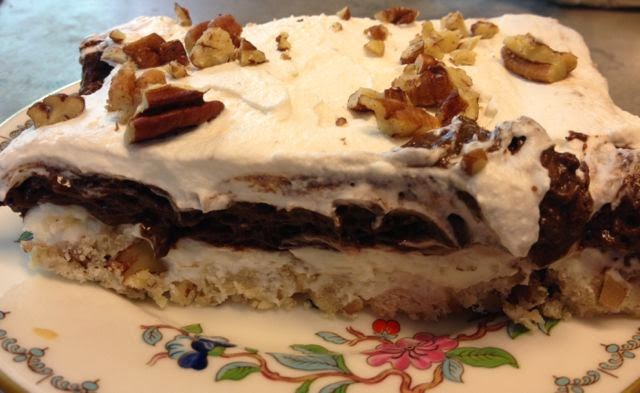 The original recipe of a 70s favorite
"Chocolate Sin - Better than Sex Cake"
(Remember when so many dessert recipes had "sex" or "Robert Redford" in the name?

A good dessert -- the original far better than the 70's version
And just a little bit more work! 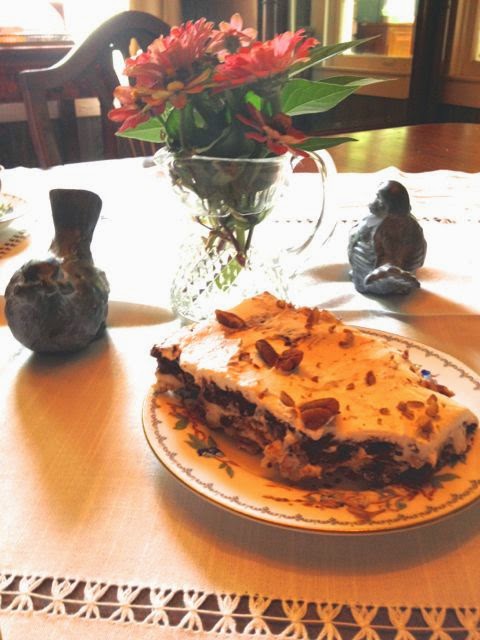 Big pieces because we needed to be fortified!

I'm not sure which friend of mother's was "Susan"
but her Chocolate Delight
is wonderful
(and better than sex!)

Beat ingredients together and pour over first layer

Melt chocolate with note water in a double boiler; cool slightly, stir in egg yolks.    Beat egg whites with a pinch of salt until very stiff and then fold into chocolate and egg yolk mixture.    Pour over second layer and let set for 2 hours (or longer)

Top with sweetened whipped cream and chopped pecans before serving.

NOTE:    The 70s version used Cool Whip instead of whipping cream and instant chocolate pudding instead of the chocolate and eggs.     My opinion -- the original version is by far better and really not that much more work!

It's Thursday and I'm joining Susan at Between Naps On The Porch for Tablescape Thursday
Posted by Martha at 5:48 PM

So nice that you have a lunch bunch buddies
Love the dishes
You always give me a smile
when I read your posts...such a nice lady you are...

Martha,
Oh, yes. . .I have the 70's version of this recipe from my MoMa Carmen. Hers is titled, "The Next Best Thing to Robert Redford"!!!
My daughter~in~law, now makes this dessert with pistachio pudding and "Mr. Ed" says it's her best dessert!!!
I absolutely adore your Pembroke China, dear friend!!! I think it is splendid how you work the "gifted" birds within your tablescape! I'm sure the Lunch Bunch appreciates seeing them being featured in your home, too!!!
Fondly,
Pat

Big smile here, a friend brought sex in a pan to work for a treat way back when and it was sinfully decadent.
We need a low cal version that's as good. :-)

Memories, memories of my children's school days, when this was the dessert of choice for all school banquets, awards dinners, and any other sit-down gathering. Long rows of dessert plates arrayed in that big kitchen, awaiting the cutting of all those pans of "Mountain Mama," and the expectations of the crowd fulfilled in happy sighs of delight as each fluffy plate was set down.

(Except for that one memorable year when the new Principal's wife insisted on our making That Blueberry Thing ---her Mama's recipe, and served in all the BEST HOMES in Greenville---similar enough on first glance, then a gingerly poke-and-taste, and murmurs of displeasure, amping up to discord and bordering on mutiny. We who had been sorta steamrolled into making it ---frozen blueberries, black cherry Jello and a cream-cheese/Kool Whip layer which took on the tint of spilling KoolAid on your Sunday blouse---were embarrassed and stood adamantly for the school favorite thereafter.

Haven't thought of that in years.

One of my volunteers makes a version of this every week, but it has a vague chemical aftertaste - from the pudding and cool whip, I'd say. Your version looks positively scrumptious!