It's the Summer Solstice

And here they're celebrating in style
For there are still some Druids and this, to them, is sacred ground.
In fact, as far as I know they're the only ones allowed close to these stones!

When we spent that spring in England,
we lived five miles from Stonehenge

And when we were out and about, we often would make sure to drive past them on the way home 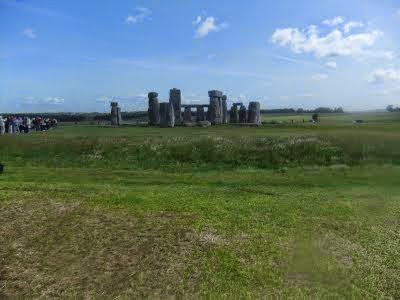 It was nice to have these as "neighbors"!

We've seen them before
Many times
Once, in fact, in the snow! 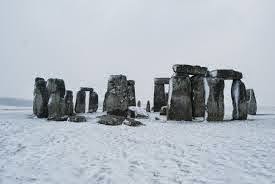 It was beautiful
All black and white!

And the stones themselves . . . 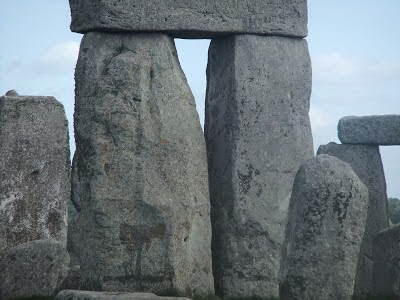 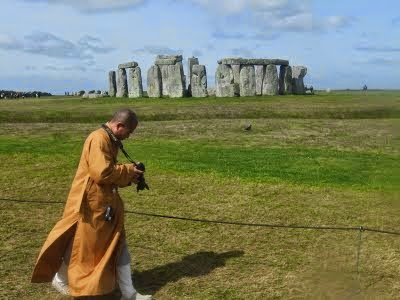 We did find a Dali Lama follower.
With his robes, the stones in the background a camera around his neck
It's one of our favorite pictures of our trip
A once in a lifetime picture!

We won't be celebrating the solstice at Stonehenge today
But every June 21, we're reminded of that Spring when Stonehenge was a neighbor
And what what the Druids are "doing tonight"!

We were there exactly eleven years ago, on Solstice day, and were told by a very apologetic guide that we could not even approach the site by road, for it was off-limits on that particular day.

Our driver, who lived fairly close, surprised us by channeling that huge vehicle through one of those deep roads which travel one-lane between dirt-up-past-the-windows, and landed us quite close, off the highway and smack-dab in the flow of all the folks with the proper credentials. Though we could not alight from the bus, we got an unusual spectacle: thousands, it seemed, of black-garbed and costumed Druids and priests and Star Wars characters and fae, all walking with their coolers and bedrolls and jugs and even bongos.

It was this surreal time, between my imagination of how the Exodus must have looked in Egypt, and that silly scene in Joseph and the Amazing Technicolor Dreamcoat, for I swear there WERE people with trays of wineglasses on their heads, as well as unwrapped sub sandwiches and birthday cakes.

They surged and ebbed around the bus like a big dusty tide, as we sat still, like fish looking at the folks outside their aquarium. It was a once-in-a-lifetime view for most, I think, and quite a memory. Much more vivid than a photo op might have been on an ordinary day.

My close friend was supposed to be there today, but had to cancel her trip because of an injury. I visited some years ago. It is an interesting sight.
Happy First Day of Summer!

There is a replica not far from where I live. Have you heard of it? http://en.wikipedia.org/wiki/Maryhill_Stonehenge

We saw Stonehenge in the distance, driving somewhere else... back about 15 years ago!
Love the Dalai Lama wannabe in your last picture. :-)
Love, Cass