I'm on a number of Boards in my community.
Sometimes as a member
Othertimes as an officer
Some I've joined lately
While others have been long standing membership

And on one of my boards . . .
I volunteered to be on the Nominating Committee
(which is one way to ensure that you won't be nominated!)

Saturday, the other member of the Nominating Committee
came over to discuss our options.

We met on the porch for it was a nice afternoon
August on the prairie can be unbearable -- but not so August 2014! 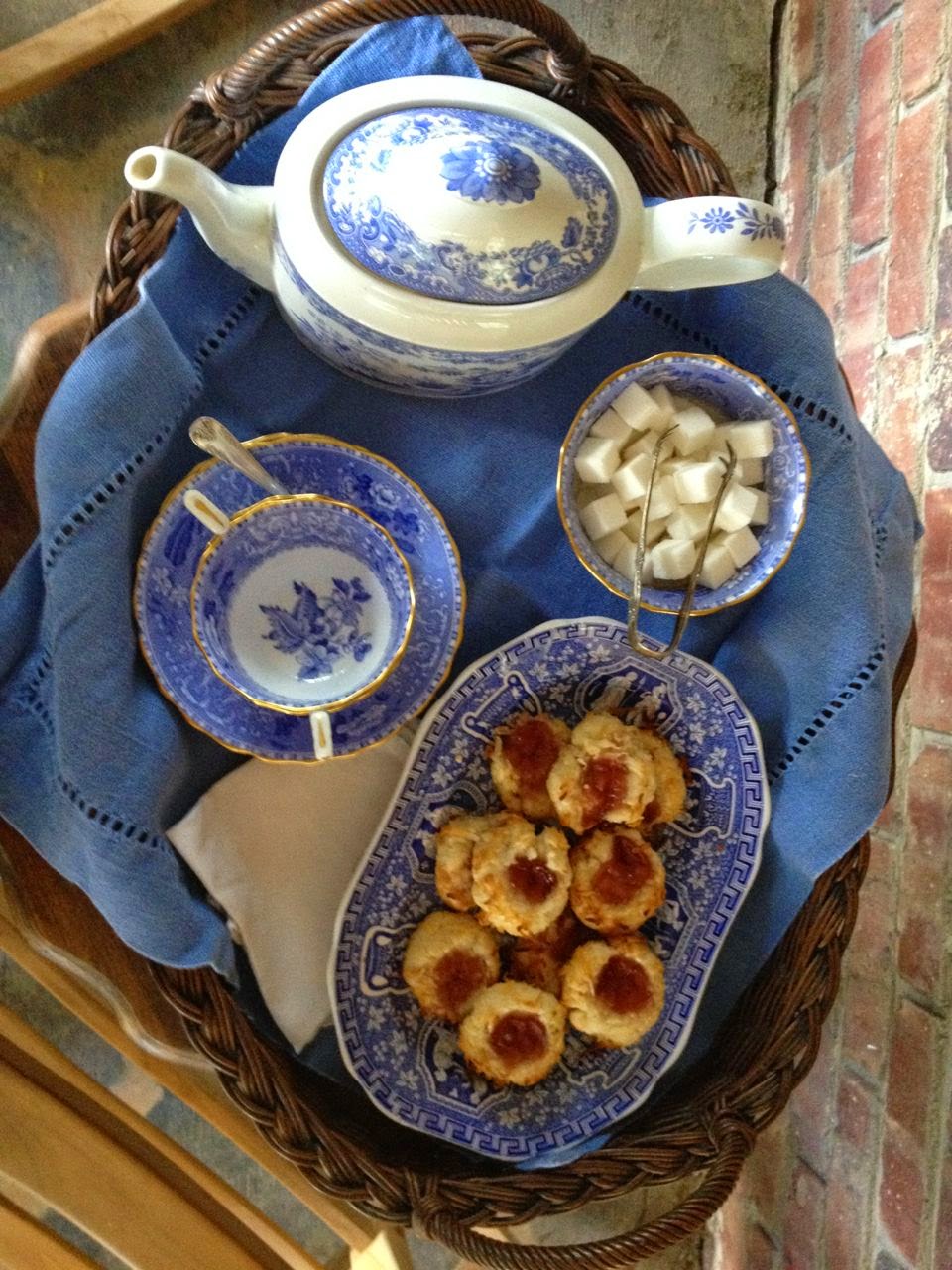 And took the tea tray to the front porch 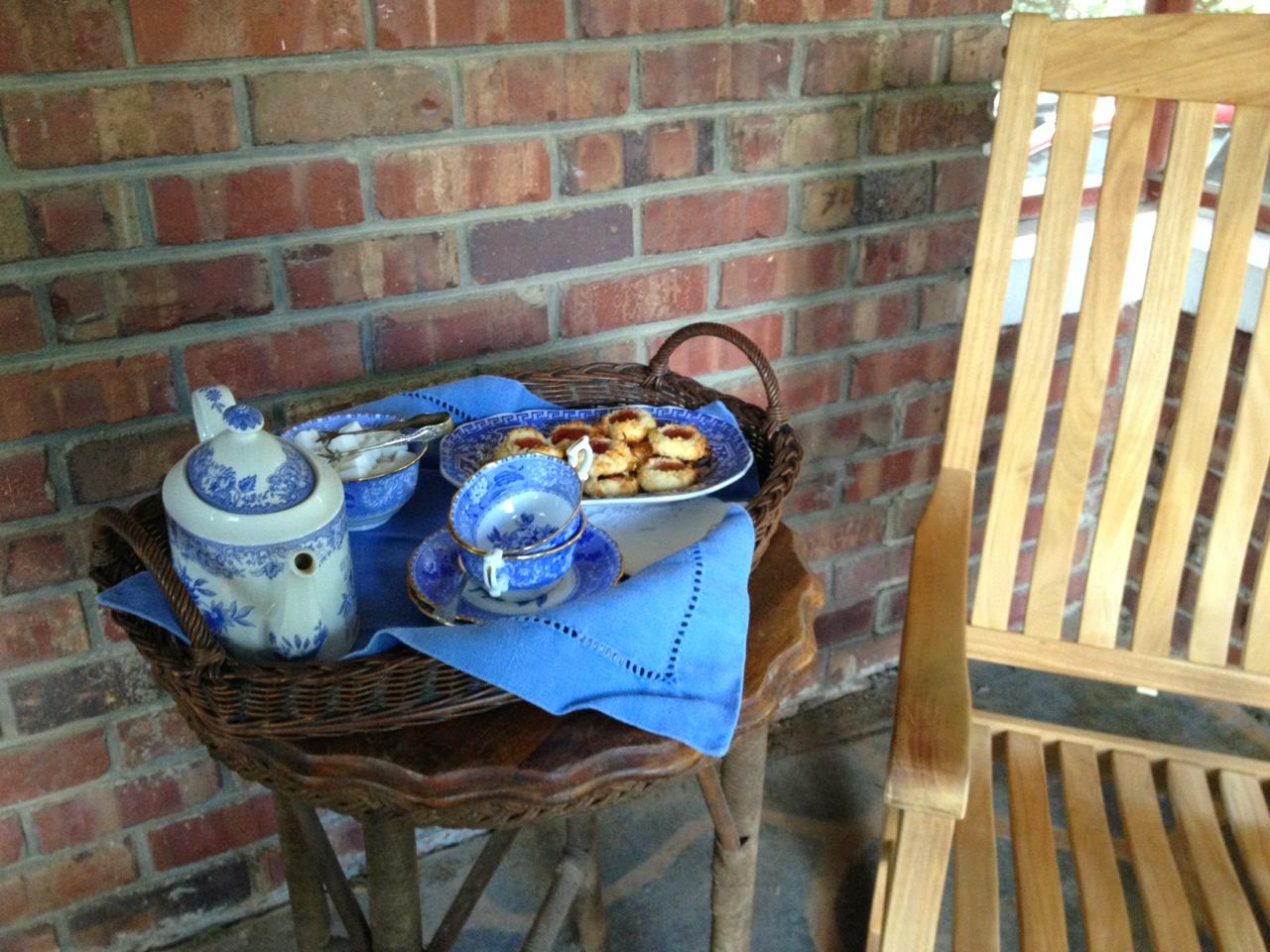 There is nothing like a meeting in a couple of rockers on a shady porch
With a cup of tea nearby and cookies within reach! 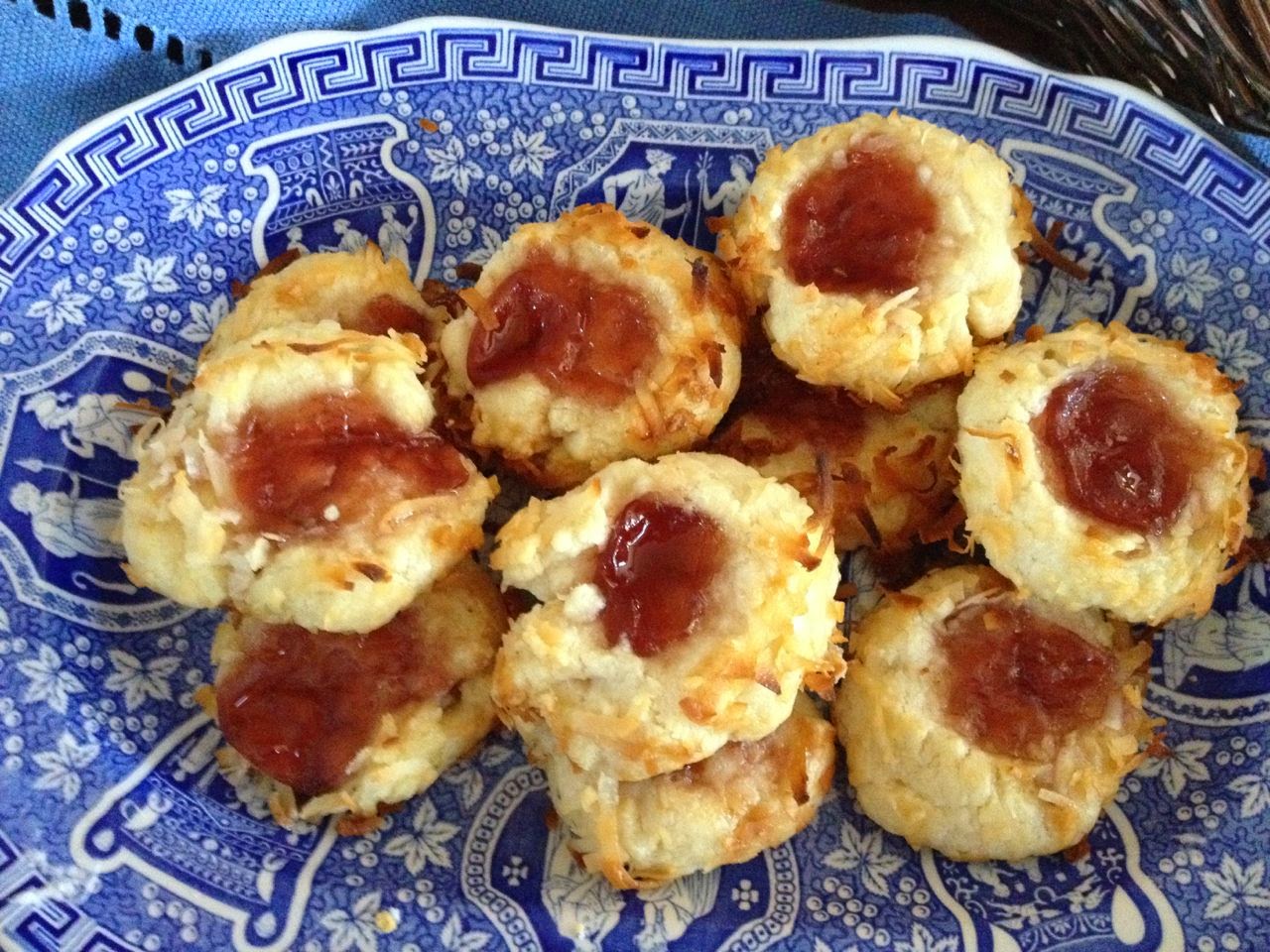 One of my favorite --
Ina Garten's jam thumbprints
They're rolled in coconut before they're "thumb printed" and filled with jam.
She recommends raspberry or apricot
But I use whatever I need to use in the fridge --
today it was raspberry.

Of course, my beloved blue and white --
A blue linen napkin as a tray cloth,
Spode Blue Room small platter for the cookies
And Spode Camilla cups and saucers and sugar bowl
And a Blue Room teapot

We got a lot done
And did some visiting as well!
Soon, it was time to say goodbye
for we both had hungry husbands who wanted dinner. 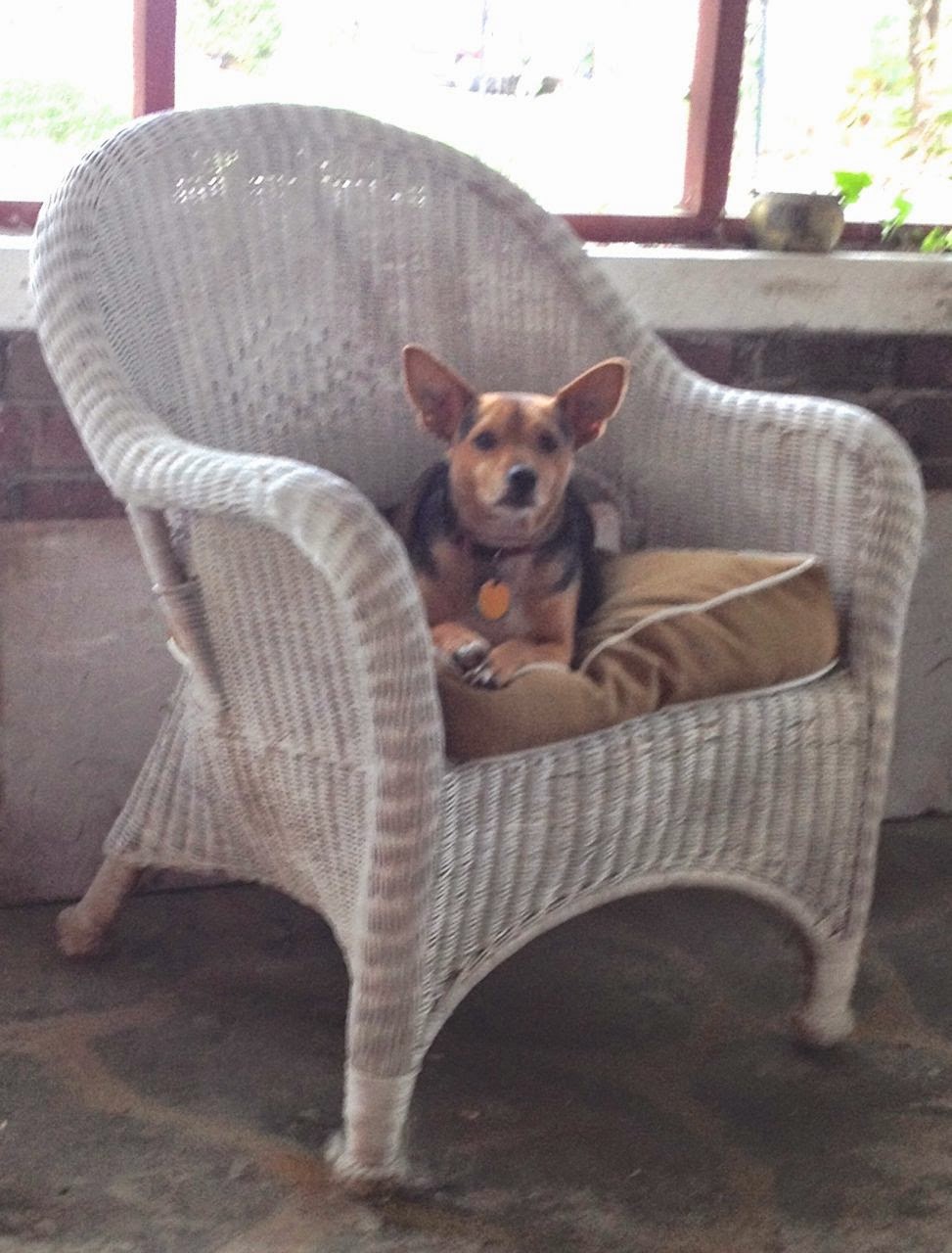 A "starving dog" face, he thinks
is the best way to get a bite!

3 sticks unsalted butter at room temperature
1 cup sugar
1 t. vanilla
3 1/2 c. flour
1/4 t. salt
1 egg beaten with 1 T. water, for egg wash
7 ounces sweetened flaked coconut
raspberry and/or apricot jam
(or whatever flavor jam you like -- these cookies are a good way to use up those jars with only a
teaspoonful left)

In an electric mixer, cream together the butter and sugar until they are just combined and then add the vanilla.     Separately, sift together the flour and salt.    With the mixer on low speed, add the flour mixture to the creamed butter and sugar.    Mix until the dough starts to come together.    Dump on a floured board and roll together into a flat disk.    Wrap in plastic wrap and chill for 30 minutes.

Roll the dough into 1 1/4 inch balls.    Dip each ball into the egg wash and then roll it in coconut.    Place the balls on an ungreased cookie sheet and press a light indentation into the top of each with your finger.    Drop 1/4 teaspoon of jam into each indentation.    Bake for 20 to 25 minutes until the coconut is a golden brown.     Cool and serve.

Love your blue tea cups. You are one busy lady. Have a good week. Hugs, Martha

LOVE your Spode, Martha! I have only one Blue Room teacup and I am thankful I found it. I'd love to find another. You truly are a wonderful hostess.
I have made those thumbprint cookies but without the coconut. Wonder if Hubby would like them with coconut. I'll ask him. It's always a pleasure to have you join me for tea. Have a delightful week.

Sandi -- they are good either way but if you DO like coconut they are so much better with it!

This recipe looks like it would make quite a few cookies and I know how you think - some for now and some to freeze!
People must like coming to your place for meetings. I'll have to keep in mind to be on a nominating committee so I won't get nominated myself! Good advice.

Your home is very lovely. I assumed that you live in the country when you say you live on the prairie, but I see a sidewalk in front of your home and other homes nearby.
Love your antiques as well.

You had the perfect committee meeting -- tea and cookies on the porch! All committee meetings should be like that! I giggled over your comment about being on the nominating committee being sure you won't be nominated... still giggling. Your Spode is gorgeous. I'm a big blue and white fan. Happy Tea Day!

Your teapot and blue tea-cups are adorable. The pattern is so delicate.

This is the perfect summmer porch teatime. Absolutely lovely in every way.

Love thumbprint cookies. My mother used to make them. And I love Doogie in "his" wicker chair. These dogs do know how to make themselves at home, don't they? Ours likes to sprawl on the sectional in the family room -- which I thought was big enough to handle all of us, but which wasn't actually designed to accommodate a dog stretched out full length! xoxox

What a sweet posting on the porch with Doogie waiting and hoping! I will definitely be making your Ina recipe. I like to freeze cookies too in small cartons so as we have a few here and there! Thanks for sharing!

I could have written this blog post! Except for the Nominating Committee, that is an incredibly smart way to avoid being nominated.

We make Thumbprints every Christmas. It never occurred to me to make them any other time!

One of my September meetings is going to be a party in a home. I cannot wait to share.

Your blue and white china is so beautiful, that I simply had to pin it to my Tea Cup Tuesday Pinterest Board, linking directly to your blog post. It was is so nice sharing Tea Cup Tuesday with you. My blog is marywaldsvintageplace.blogspot.com stop by for tea cup fun, and say "hi".

Your blue and white china is so pretty--especially those teacups. It looks like you had a lovely afternoon visit with your friend and fellow committee member!

Love your blue tea set for tea time! Cute doggie! Thanks for the recipe.
Nancy

Your trays always look like something straight out of an English magazine!