Two years ago, I was celebrating Julia's Birthday (her 100th) with cake -- her cake.

Today,  I'm reprising my post from two years ago because I'm too busy to bake a cake -- I've been out and about celebrating my friend's Shirley Ann's birthday -- alas not her 100th . . .


But in memory of Julia
my first culinary hero


Today is Julia Child's 100th Birthday.     An icon in the foodie world, she took us away from jello salads and onion soup on roasts to beef bourguinon and vinaigrettes.     She was meticulous in her research when writing her first cookbook, Mastering the Art of French Cooking.

Doesn't everyone have a copy of Mastering the Art?

I cook with the first and I feel the second should be locked under glass!

As a high schooler, my mother and I would sit and watch Julia.

Nothing fazed her and you never knew what she was going to do.    I must admit that my mother never did make anything that we saw.    But as a perpetual clipper of recipes and a lover of good food, she enjoyed what Julia was making.

As a new bride, I, too, enjoyed watching Julia.    That was when, I think, that I got that first copy of Mastering the Art.     I don't remember cooking anything from that book but it was comforting to have it as I faithfully watched Julia.


I think this is the Julia I remember best -- the one from those shows . . . and she was the first "Queen of Butter"!     Paula Deen doesn't hold a candle to Julia and her butter!

And Julia's kitchen -- which was featured in that show.    I adored it.    From the big stove to the wooden countertops to the "things" with a place for everything and everything in it's place.    A real cook's kitchen -- not a "show" kitchen.

And today is Julia's birthday -- she would have been 100.     She led a very interesting life and began her celebrity career later in life.    But it was a career that spanned decades and those early fans of hers who learned to cook French food watching the beloved Julia on their black and white television turned into a second and perhaps a third generation as she did more books and more television shows.    The later ones being filmed in that famous kitchen.

Birthday celebrations at Linderhof are a meal and then a cake.    Usually the honoree's choice of cake.

Dinner first, dishes cleared and then on a pedestal, the cake with candles is brought in.


Since it was a birthday celebration, china instead of the transfer ware -- my favorite gold and white cups which are so dainty and the silver coffee pot.     Noritake Marcassite dessert plates and Mrs. Boland's dessert forks.

Just one candle -- a tribute to Julia.


We did light the candle, although we did not sing Happy Birthday!     But we each had a large piece of the cake and pronounced it superb! 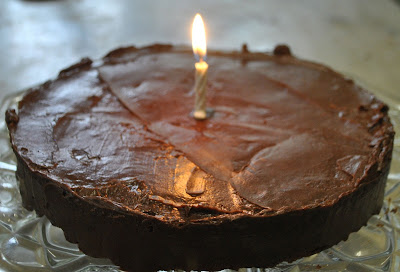 You Changed the World!

What fun trivia about Julia and a lovely cake that I am sure was delicious.

Oh this is neat.

Did you watch the movie "Julie and Julia" by chance? I loved it. Funny I went straight to the grocery after seeing it and bought everything I needed for her recipe for Boeuf Bourguignon.

Mmmmm, now I am hungry.

Ahhh, such memories when all the food was in gray-and-white and the recipes made easy and fun.

My children and I were avid watchers of those early programs, and occasionally, we'd have EVERY item needed in the pantry or fridge. I still have a sweet spot in my remembrance for the afternoon of chou-fleur a la polonaise, with one browning the butter and crumbs, another sieving the warm boiled egg. And the same program, with Broccoli and Hollandaise (one of my first makings in a bowl-atop-a-pot-of-water). What a supper feast that was, and we felt so elegant (though probably hot and disheveled from all the poaching and steam).

We all cook for our families, and those are still two of our stand-by dishes.

Love your "working kitchen" and would take it over a show kitchen any day =) Great post on Julia!