Dinner in the Breakfast Room

When it's just us, I like to set a nice table
With a tablecloth, real napkins
my beloved blue and white
And a centerpiece 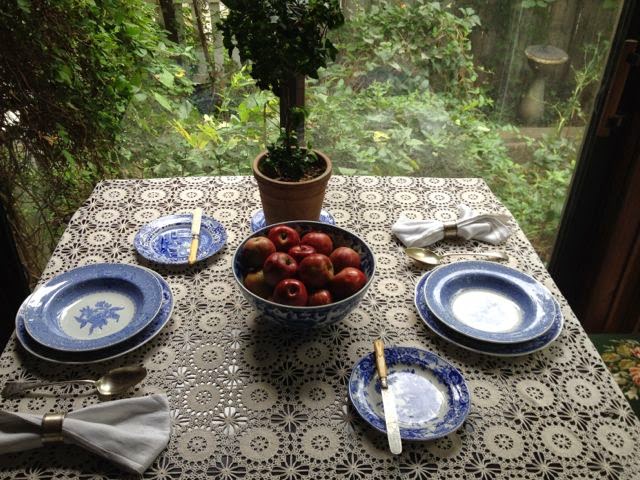 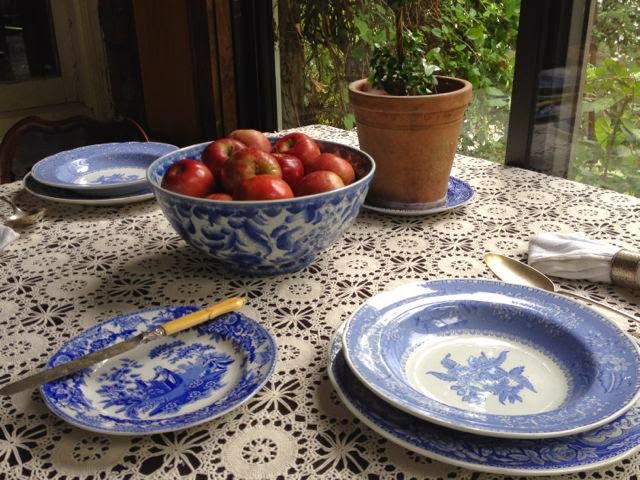 My ivy topiary
(bought in 2000 for my first Valentine's luncheon --
I am so glad I decided on the ball rather than the heart)
And a bowl of apples
(It is apple season, after all) 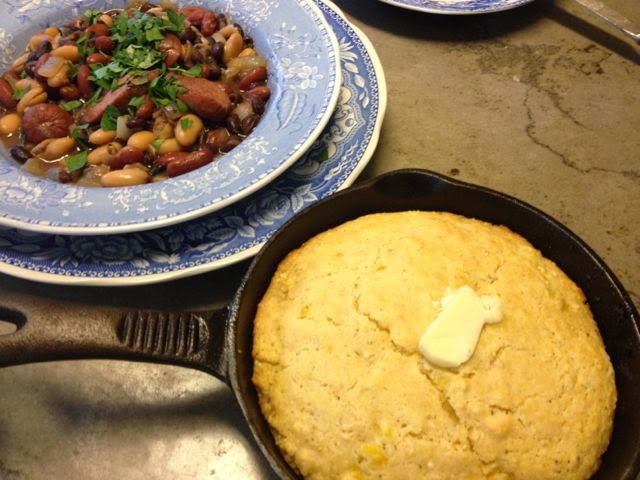 I'll definitely be making the cornbread again
(In fact, it will be the cornbread recipe from now on)
and the Franks and Beans will grace our table many times this winter!

Heat 2 Tbsp. oil in a large heavy pot over medium heat. Add onion and garlic; cook, stirring occasionally, until softened, 5–8 minutes. Remove and discard casings from 2 sausages; add sausages to pot. Cook, breaking up with a spoon, until sausages and onions are lightly browned, about 5 minutes.
Add beans and wine to pot and cook until wine is reduced by half, 8–10 minutes. Using kitchen twine, tie parsley and thyme into a bundle; add to pot along with bay leaves and broth. Cook on medium-low heat, partially covered and stirring often, until liquid thickens, 40–50 minutes. Discard bundle and bay leaves. Mix in butter and 2 Tbsp. chopped herbs. Season with salt and pepper.
Meanwhile, after beans have been cooking for about 25 minutes, heat remaining 1 Tbsp. oil in a large skillet over medium heat. Cook remaining sausages, turning occasionally, until browned and cooked through, 15–20 minutes. Slice.
Divide bean mixture among bowls. Top with sausage slices and remaining 1 Tbsp. chopped herbs.

Adjust oven rack to the middle position and heat the oven to 400.

Whisk the flour, cornmeal, baking powder, salt and baking soda together in
a large bowl.

Mix the buttermilk, corn, brown sugar and eggs together.

Gently fold the buttermilk mixture into the flour mixture, then fold in the melted
butter until just combined.

Scrape the batter into the prepared pan and smooth the top.

Bake until deep golden brown and a pick inserted into the middle comes out with
a few crumbs, about 35 minutes.

NOTE:   I made a half recipe and baked it in two individual cast iron skillets.

It's Thursday and I'm sharing my dinner table with Susan at Between Naps On the Porch for
Tablescape Thursday.

The Spode Blue Room never disappoints...so regal. Thanks for the cornbread recipe. I look forward to trying it. Cherry Kay

This all sounds just SO welcoming and warm for Fall, food AND setting. And there aren't many pictures prettier than a good black skillet of cornbread.

I discovered in the last little while that just one little pat of butter will give you a lovely brown crust if you melt it right in the middle of the sprayed pan. Then pour the batter right in the center, and the little rim of butter will spread out and out, making a lovely buttery crust as it rises up the sides.

Can you tell we're all fond of the good crispy crust?

Lovely! The recipe sounds really yummy- I should try this one!!

Most of our meals are in the breakfast room so this works for me and so does the comfort food you're serving.

We love beans & franks! I never thought to serve cornbread with it. Thanks for the recipe! I will make the cornbread next time. Can't wait !
Blessings My Friend,

I love a sweet cornbread. Thank you for the recipe!

Oh, yes! This looks like just what we need this time of year! Kind of an upgrade on what we commonly think of when someone says franks 'n beans. On these chilly nights, this looks like a dinner I could really sink my teeth into!

I will admit to being a Jiffy mix girl. I used to make cornbread from scratch, but I only do that for Thanksgiving or when someone who would know the difference is coming to dinner! :-)

I hope you're enjoying fall so far. I was just ecstatic on the first day. I sat and watched the clock for when 9:29 p.m. clicked on which was the official start. I put on the song "Happy" and whooped it up from my bed. I hope you found as much joy as I did and that the feeling continues for the next 3 months!

I can tell that you are not from the South. They do not put flour or sugar in their corn bread. The Franks and Beans sound great!

What a beautiful tablecloth. How do you clean it?

And do you know how difficult your blog makes life for those of us on low carb diets? (doc's orders.) But I love reading it anyway!

Martha ...thank you for sharing this recipe for franks and beans... I made this for dinner tonight and we loved it !

Seaview -- I'm so glad you like it -- I thought it was tasty and will be on our menu a lot this fall and winter.

Love this table! The setting is lovely, and franks and beans is one of my favorite childhood meals.