Linderhof's kitchen is small
10 by 10
And what does one do with a kitchen so small? 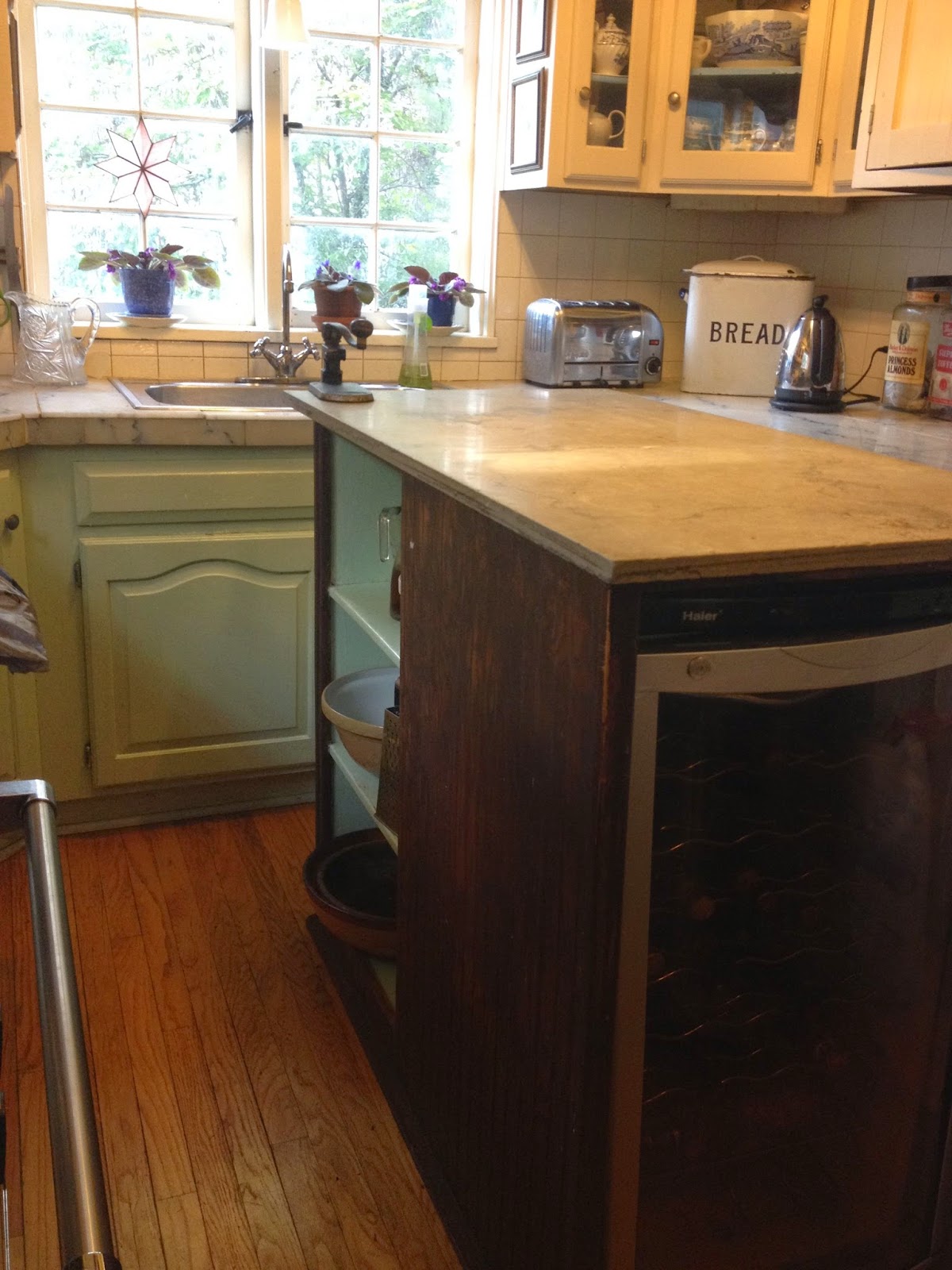 Why put an island in the middle, of course!
A 1940s era kitchen cabinet was the first island
Then about 15 years ago we had one custom built

The top of the island is marble 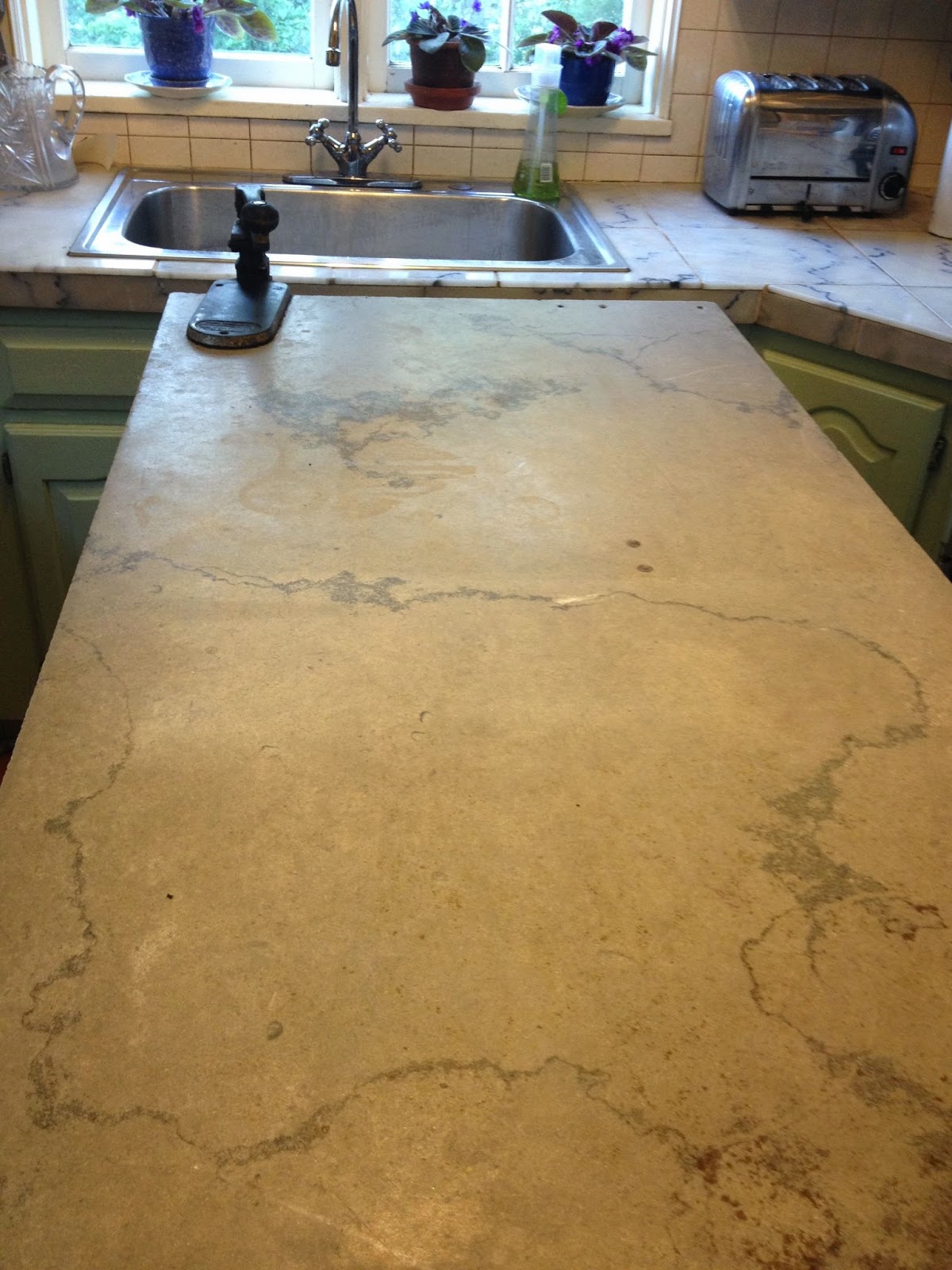 From 1885 or so
From the State Hospital where I used to work
It was well used when I got it
And I've not been kind to it
Whoever says marble is a bad choice in the kitchen
Really doesn't know what they're talking about!

When Daughter Sarah and her Andy looked at their house,
the kitchen boasted a piece of furniture used as an island
with two pendants hanging over.

Sigh -- the sellers took that island with them
(leaving the pendants, however)
Sarah and Andy were island less

And then our Scottish Rite had a complete auction
of their almost century old building in our little town,
Sarah looked over the auction photos
And spotted this 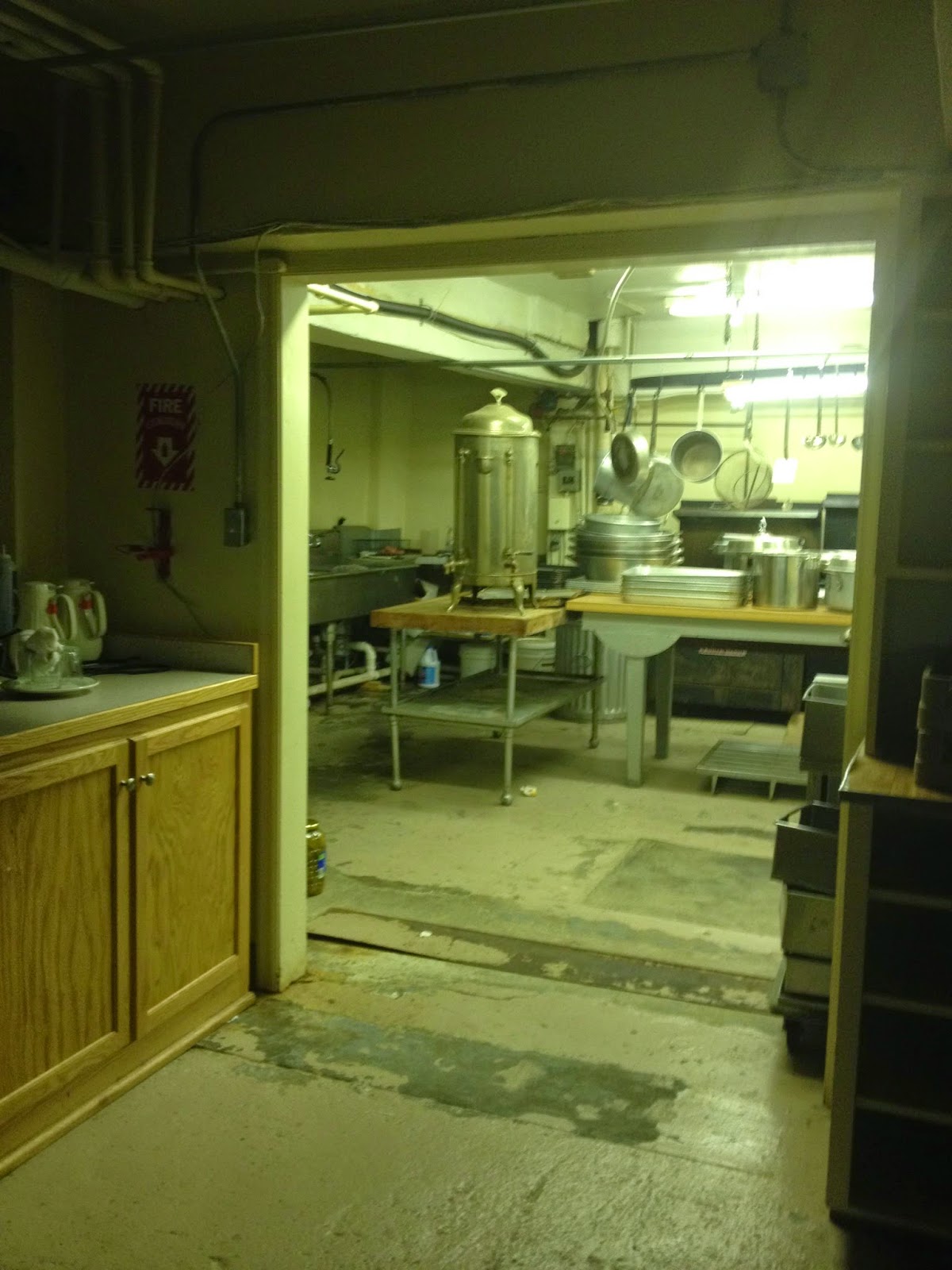 Could we go look at it, she asked,
And we did
And took pictures and sent them to her 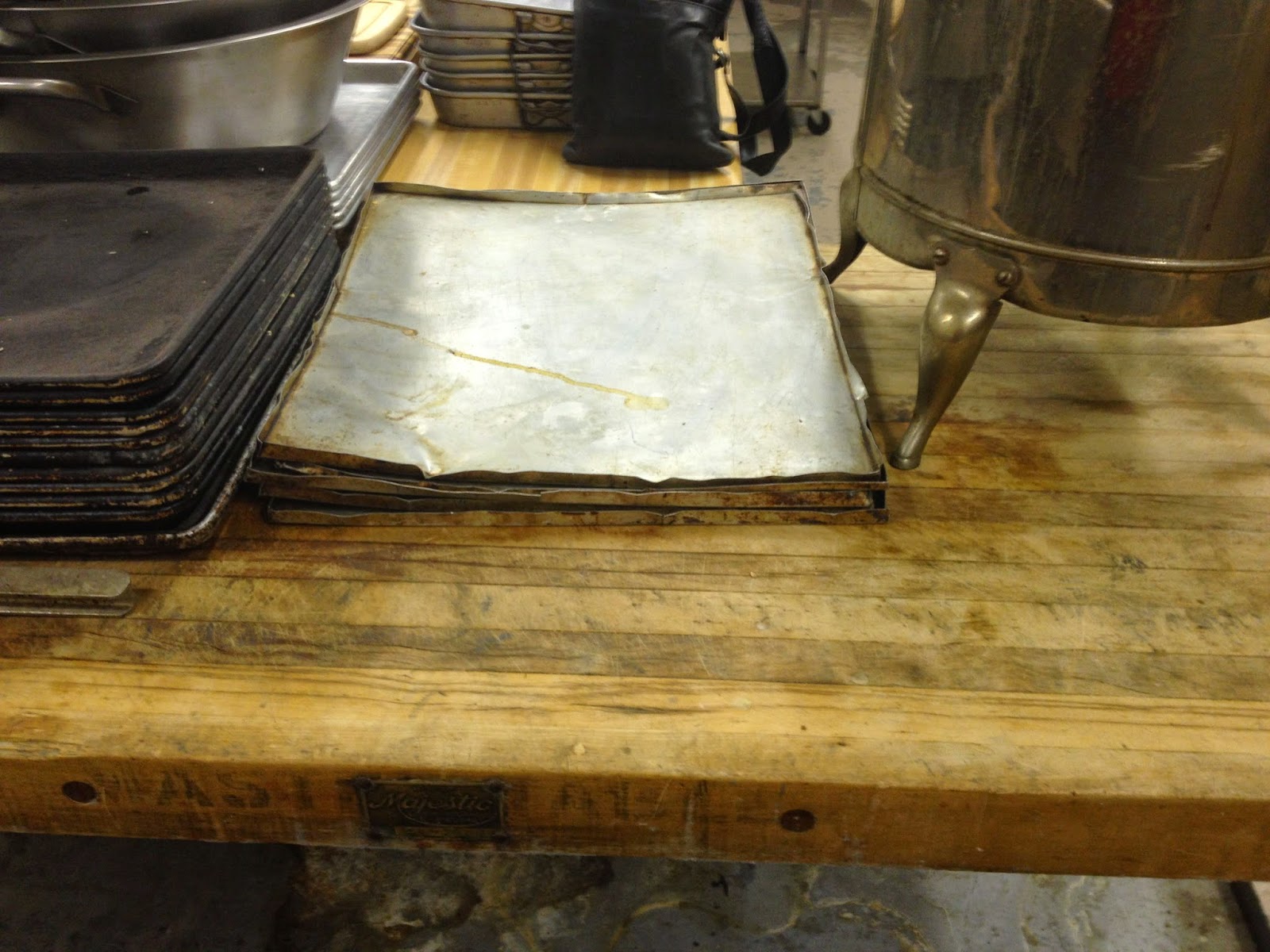 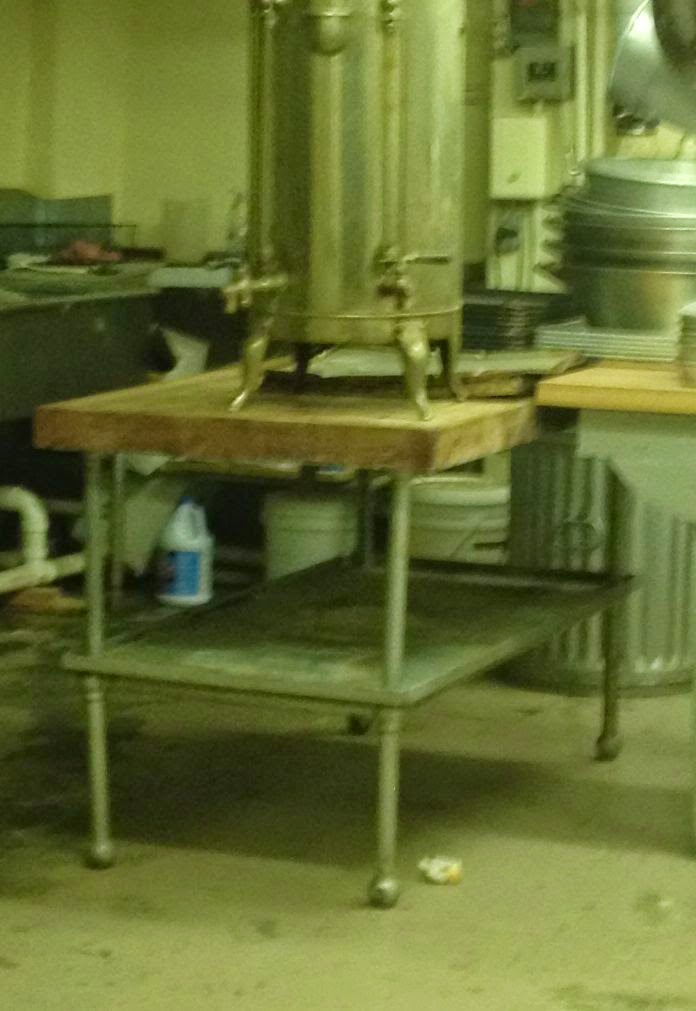 But it was sturdy
And we carefully measured to make sure that it wasn't
"too big" or "too small"
That it was "just right"!

On the side we found this 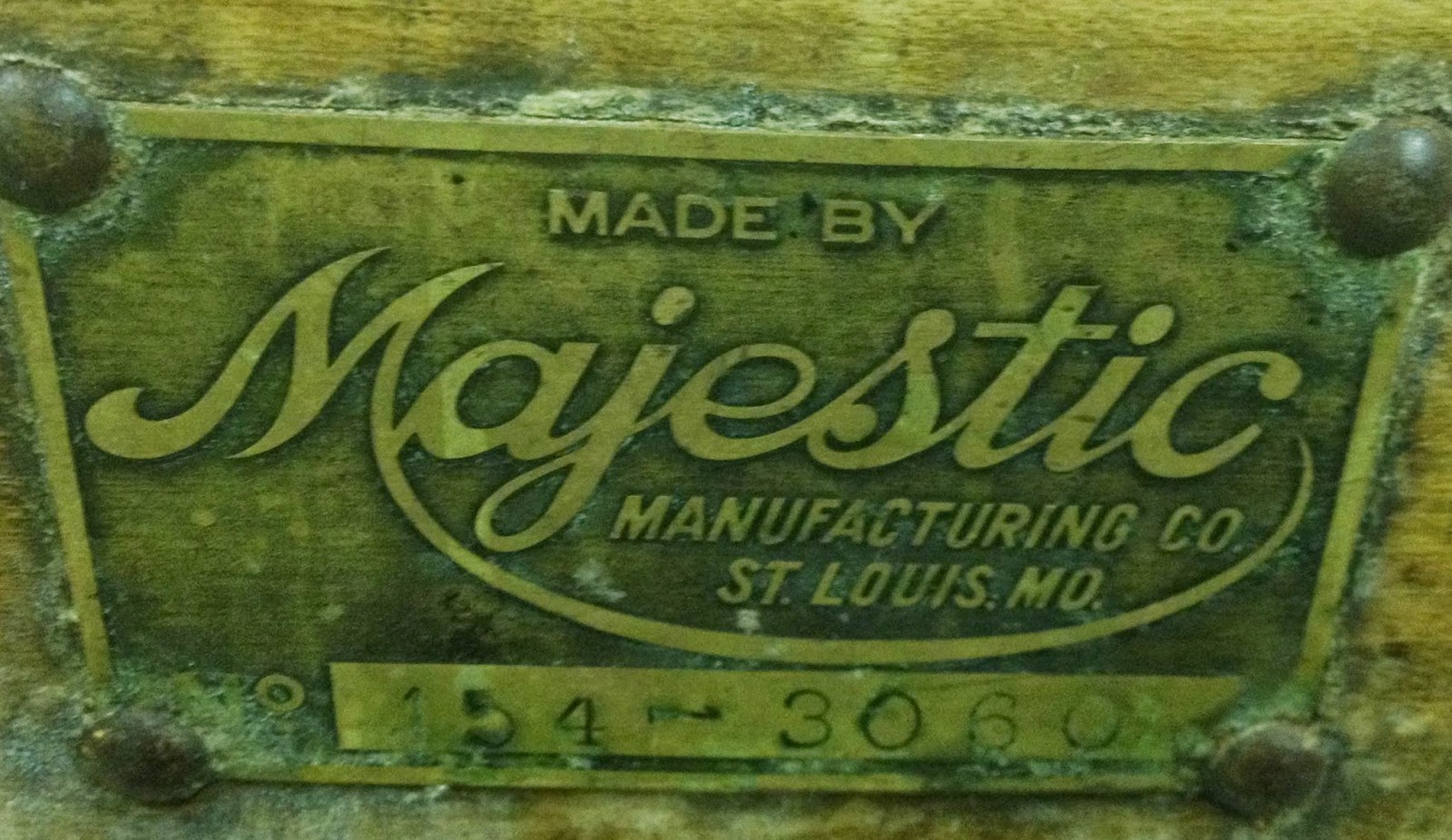 We attended the auction, we were the high bidder
(although it was a fierce bidding war for the piece --
there were others there that saw the potential in the piece) 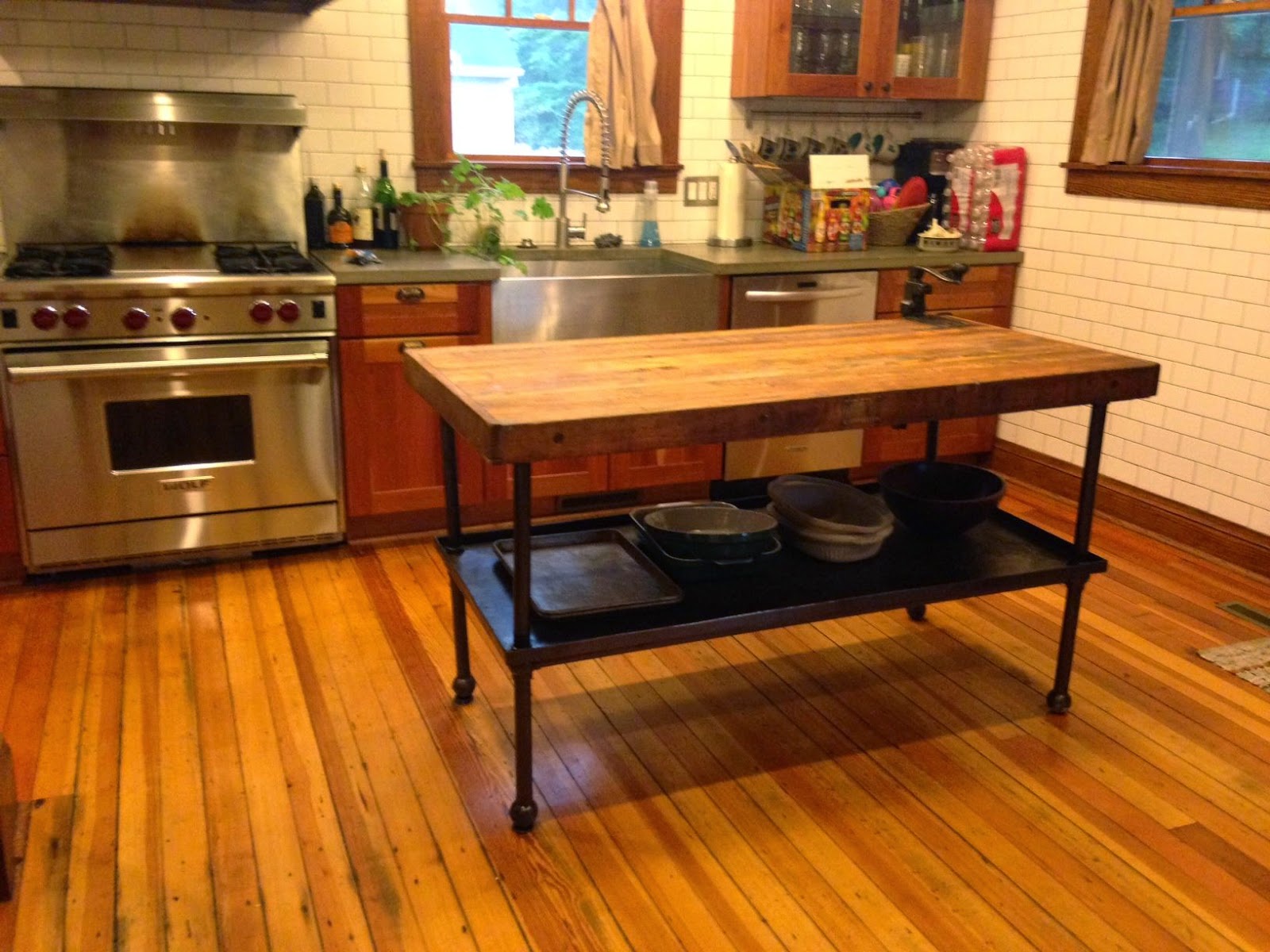 The island,
the top cleaned,
the bottom painted
The wooden butcher block oiled
And in place in the kitchen 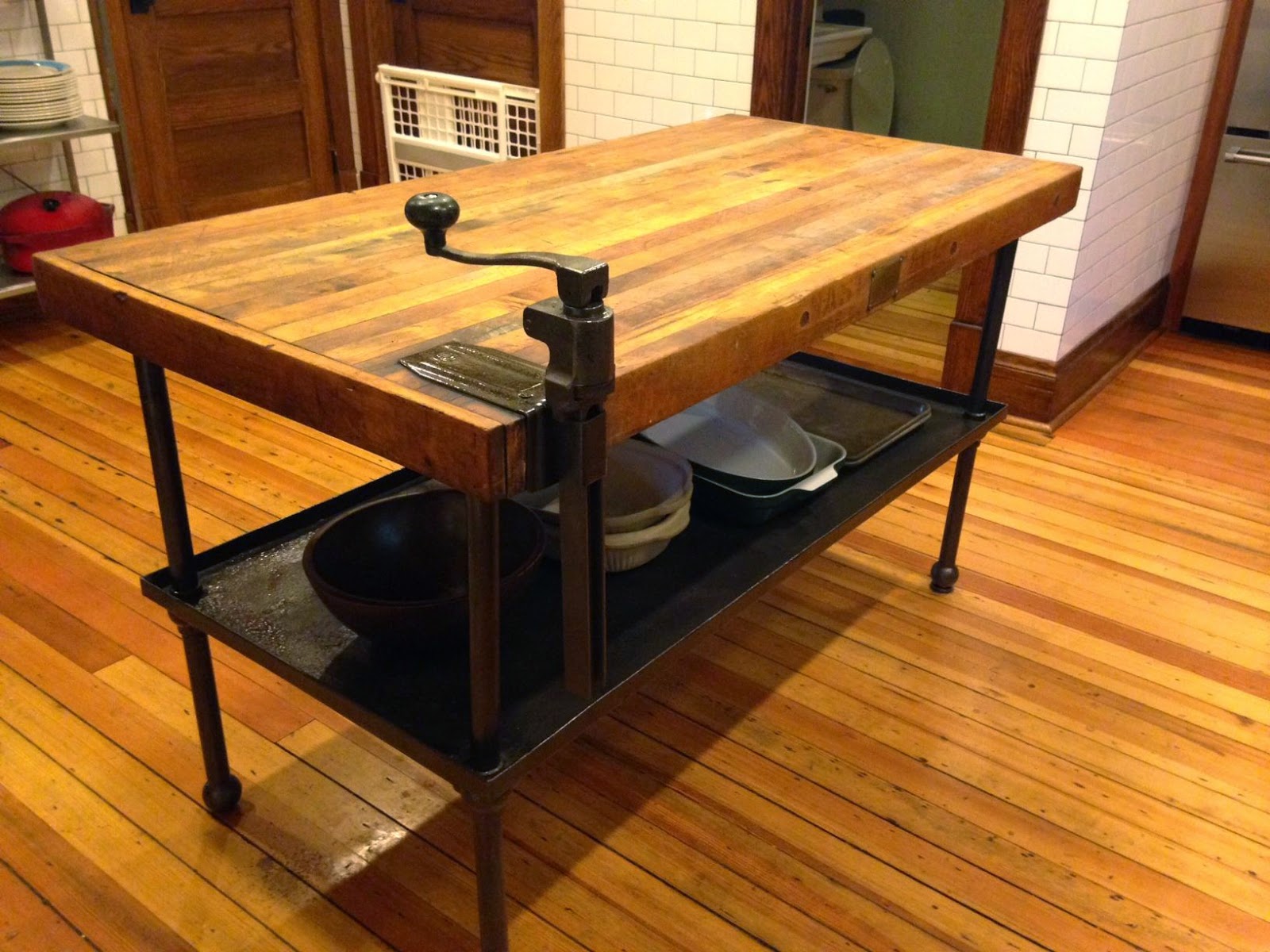 It fit perfectly in that space
under the two pendant lights 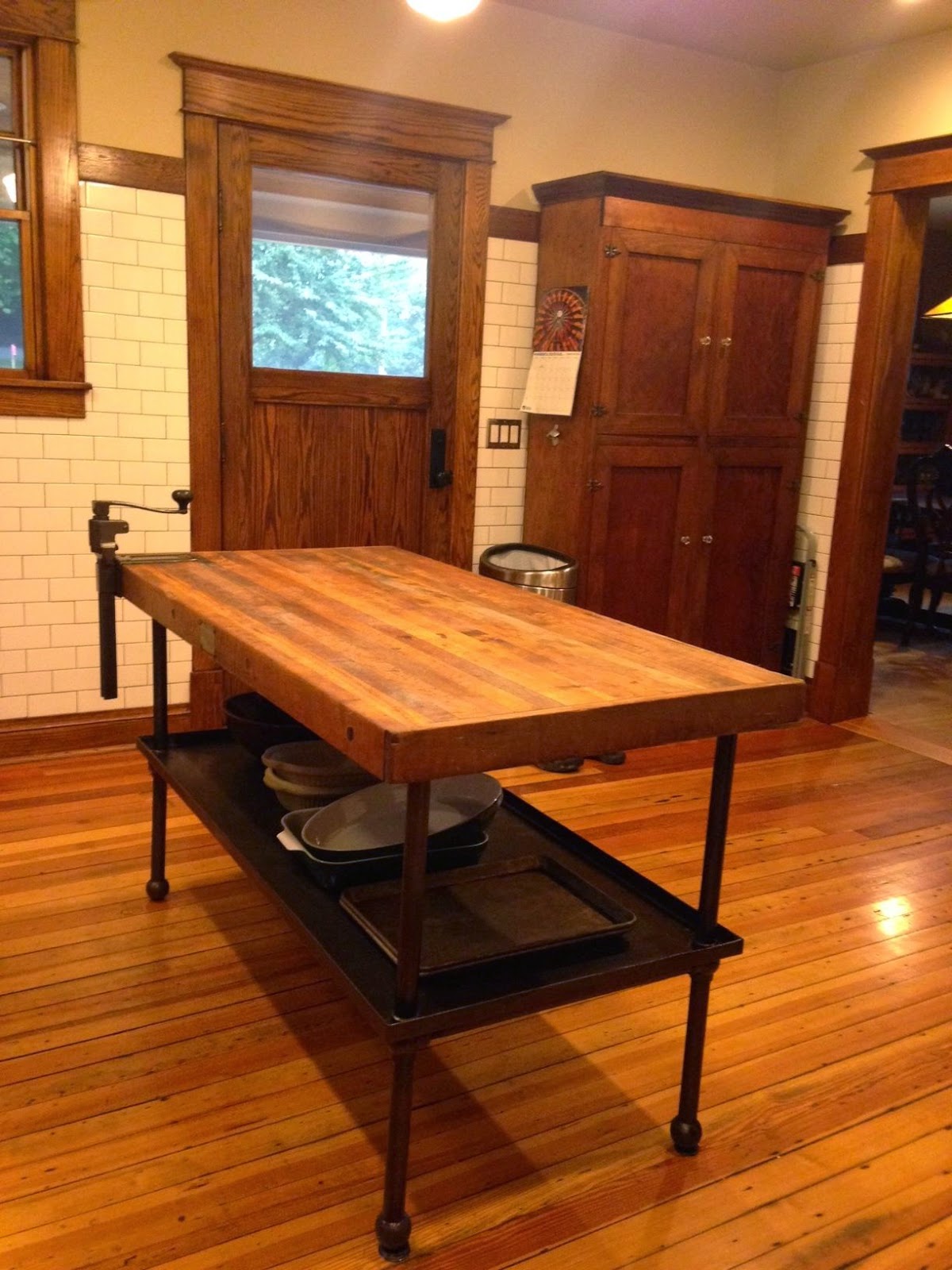 And we got pictures of all angles
The shelf is handy for those big baking dishes! 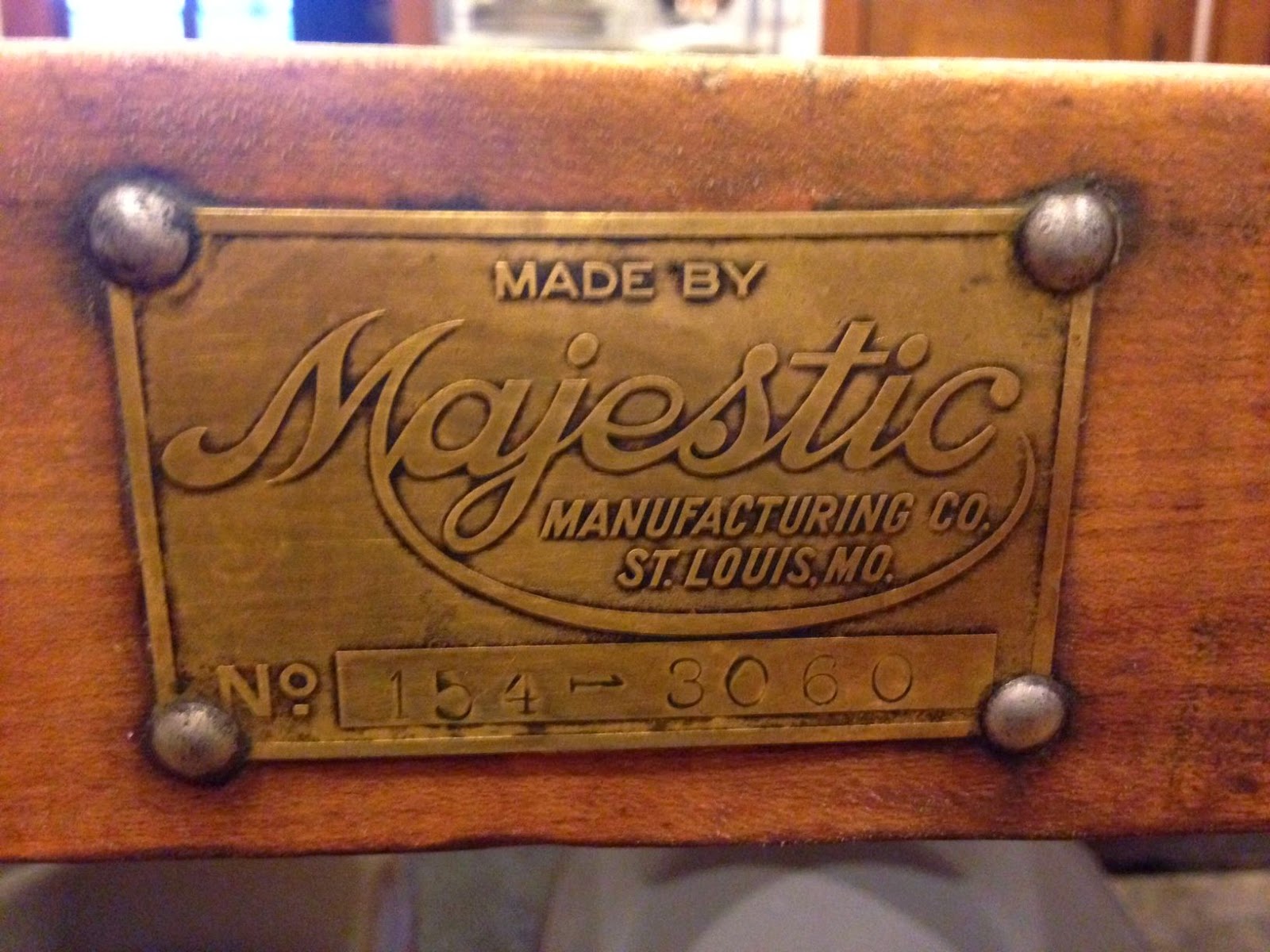 And the plaque
Cleaned and polished
and the brass shines like new!

One thing that both islands have
(hers and mine) 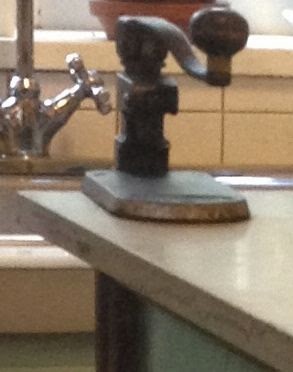 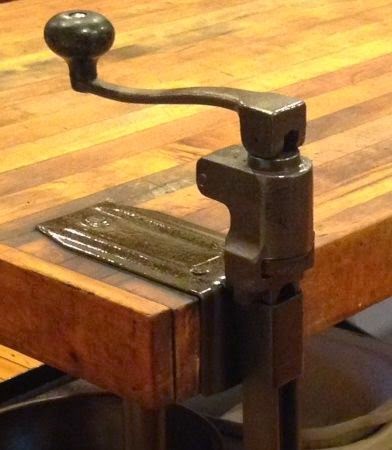 Sarah's has one, too,
although hers is newer than ours 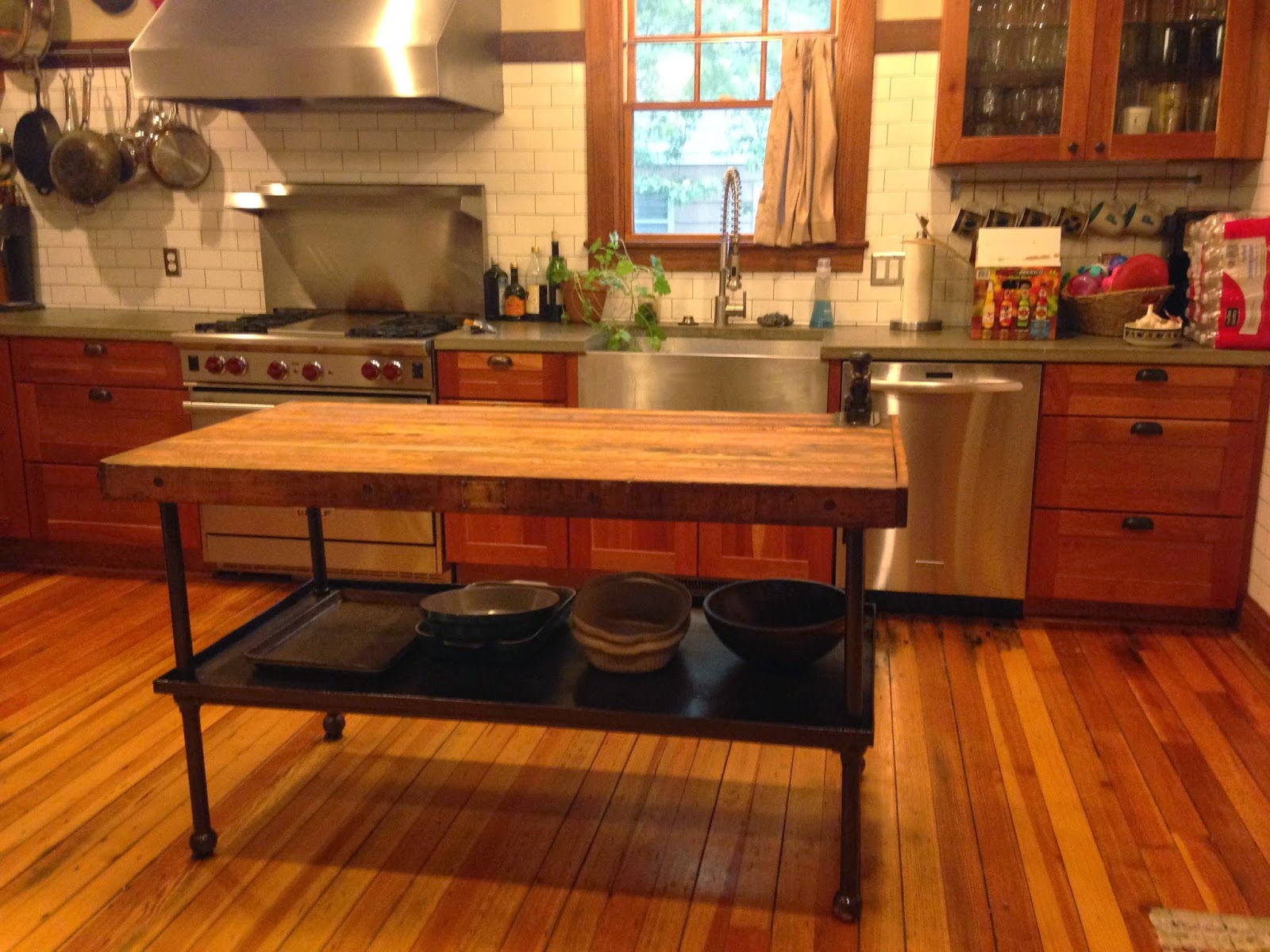 If you planned a piece for this kitchen,
I don't think you could come up with anything better
than this almost century old island with a well used butchers block top

But there is more --
It's not just an island from the Scottish Rite kitchen
Jim and I have used that island many times preparing food for
Rotary feeds and Beacon soup lines
It is because of that island that I have a commercial can opener
One of the first times we used that kitchen, I feel in love with their can opener
We found one at an antique shop three months later
And it came home with me

But there is still more --
I catered Daughter Sarah's wedding to Andy in 2002
We rented the Scottish Rite kitchen to prepare the wedding feast
(it was like a second kitchen to me because of all the time we had spent in that kitchen
cooking spaghetti and meatballs and tacos and soups for thousands of people)
We used that island when we prepared the wedding feast.
Friend Shirley Ann chopped all the broccoli for the salad on that island
The 175 pounds of brisket that we cooked was sliced on that island.

It's not just part of Fort Scott's history,
that island
but it's part of Sarah and Andy's history.

And that's why we like to buy old things --
they have a history that new things never will.

They did a great job on their refinishing
It's a great piece and looks so good in their kitchen!
Posted by Martha at 8:04 PM

Sarah and Andy's kitchen is fantastic, a real working kitchen like yours, the best kind and full of soul. That island was meant to be theirs and it looks great! Thanks for sharing!

Oh, wonderful, beyond all telling! Their kitchen looks great! Their island is great. They can tell Lucy stories about all the history of that island! It was certainly meant to be that it would come to live with them!

Perfect island for a perfect kitchen. It was truly meant to be in Sarah's kitchen. Lovely stories, thanks for sharing.
Lucy

That island is 'just right' in so many ways, Martha. It was meant for your daughter Sarah's home!

What a transformation! It is so satisfying to bring an antique piece back to life, isn't it.

Oh, that island is a treasure - I love how they restored it!!

Sometime when we look hard enough, the most wonderful things find US!

Simply wonderful piece, with a history I'd love to hear---you KNOW there have been some immense dinners and celebratory parties, and even meals for secret meetings prepared in that kitchen.

I, too, love those old roll-y can openers, and can just see a great line of gallon tomato cans, lined up as the preparatory scents of onion and oregano and basil fill the kitchen, before a big spaghetti supper.

Rachel, who has worked and catered from many a kitchen like this, and I remember most of them still.

Martha,
It is grand knowing "the History" of yours and Sarah's kitchen island(s)!!! I can't think of any other(s) who would appreciate it more!!!
Cheers. . . to more fabulous cooking in both kitchens!!!
Fondly,
Pat

That piece is now home. How neat all the history with it especially for your Sarah. It looks great in their kitchen!

I love this story, Martha.

I love this story! The island is fabulous. Wish I had one!