We've been mostly entertaining in the dining room lately,
leaving the more casual breakfast room
for just us 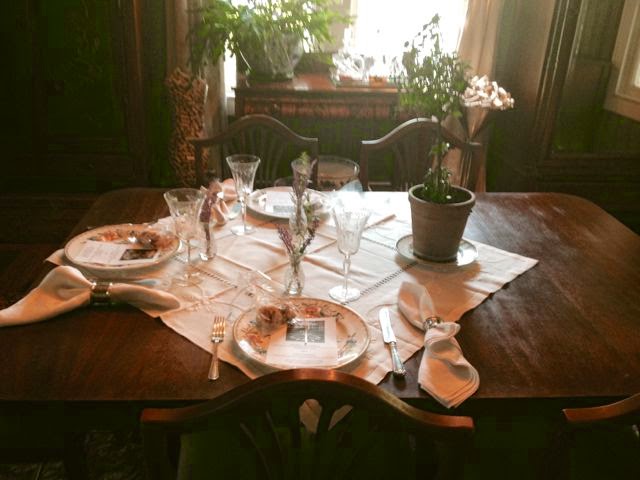 When I have three for lunch, I like to do one at the end
and the other two across from the other
Taking up, just one end of the table
The "centerpiece", then can be taller than what normally would be proper
for company -- for it doesn't block a view.

Alas, with no flowers in the garden,
And no flowers at the market . . .
I brought in my fourteen year old ivy topiary
(it was the centerpiece at my very first Valentine's Luncheon after I retired) 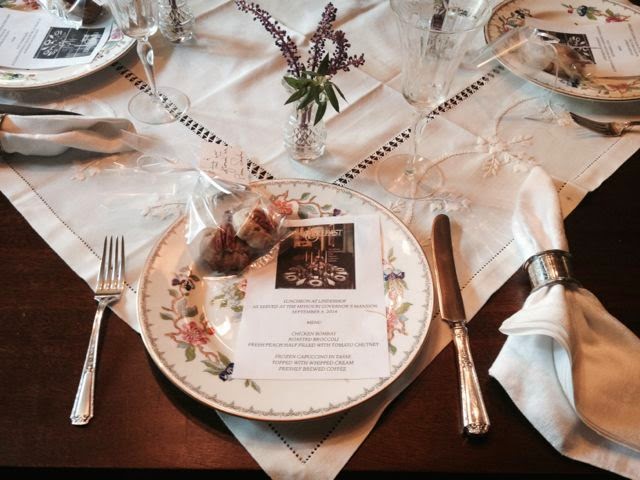 A tablecloth that I bought in the Azores anchored the table,
The Aynsley Pembroke was the china of choice,
a white damask napkin in a silver napkin ring
Jim's grandmother's cutlery,
a menu
And two little cookies to take home
To savor at tea that afternoon
And because there were no flowers in the center of the table,
a wee Waterford vase
held liarope and angelonia from the garden
(about the only thing blooming now)

Since my guests were from Missouri,
I got a favorite cookbook from the shelf,
Past and Repast
Recipes from the Missouri Governor's Mansion
a project of then First Lady of Missouri Carolyn Bond

I copied a menu that she said that they often served in the mansion,
One, I suspect, was fed to many ladies groups who the First Lady entertained at lunch 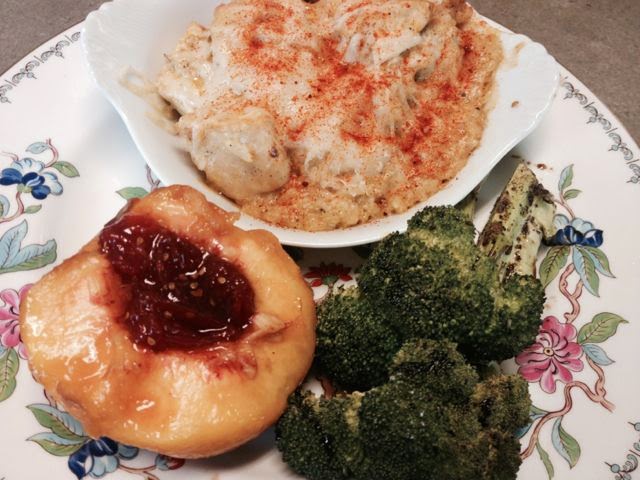 And for dessert -- also from the same cookbook 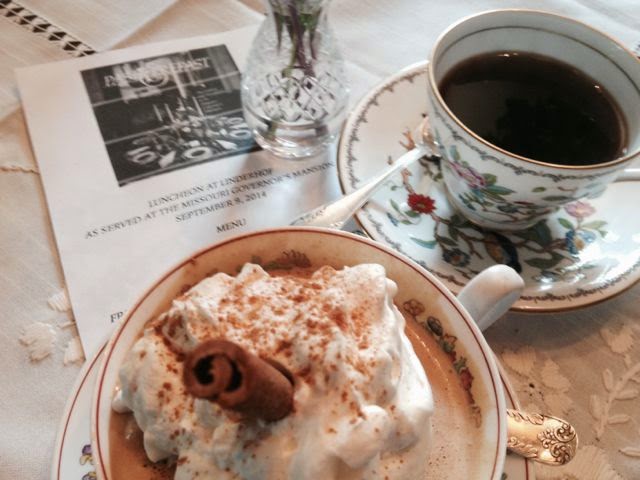 Frozen Cappuccino in Tasse
Coffee ice cream, toffee bits, some Cappuccino mix, and brandy
frozen into china cups, then topped with whipped cream and a cinnamon stick
and liberally sprinkled with cinnamon

And even though I had company for lunch,
I still managed a quick weed of the garden
(Not that I'm that good at doing that -- there were just a few and I quickly plucked them) And before my guests arrived,
I was able to can two quarts of those very same Farmer's Market peaches!

We had a delightful lunch
Visiting and catching up on children and grandchildren
Pictures were shamelessly passed
And it was fun to see the kids of the little kids we knew all those years ago!

No nap for me, after the company left
for I had dishes to do
(the downside of using the Pembroke)
and shopping at the Tuesday Farmers Market

It was a very busy Tuesday at Linderhof!

It's Tuesday and I'm joining Susan at Between Naps On the Porch for Tablescape Thursday.

Your tablecloth is exquisite and the menu excellent. Of course, the table setting is beautiful.

After all that cooking and artful arranging most people would have taken a nap! Those peaches in the jar look lovely!

How lovely that looks. Even a few green leaves in a vase can lift the look of the table when there are no other flowers.

Lovely table and the meal looks delicious!! Isn't it fun to have friends over for lunch? Sounds like you've been as busy in the garden, too.

Martha,
Your Luncheon looks divinely delicious, dear friend!!!
I adore the individual wisps of flowers from Linderhof's Gardens at each place setting!
Your china pattern is exquisite!!!
You are going to be the envy of my heart (and taste buds) this Winter when you enjoy those Farmer's Market Peaches!!!
Fondly,
Pat