But with one Lunch Buncher recovering from a cold
And another Lunch Buncher gone . . .
We decided to make the treat day another day

All of this decided on Sunday before our Tuesday Luncheon.

Usually, I spend a big part of the month planning the menu,
looking through cookbooks and sometimes even deciding on two or three
menus before I find
"the one"!

I decided on a simple soup and pie luncheon And since it was only three
we ate in the Breakfast room! 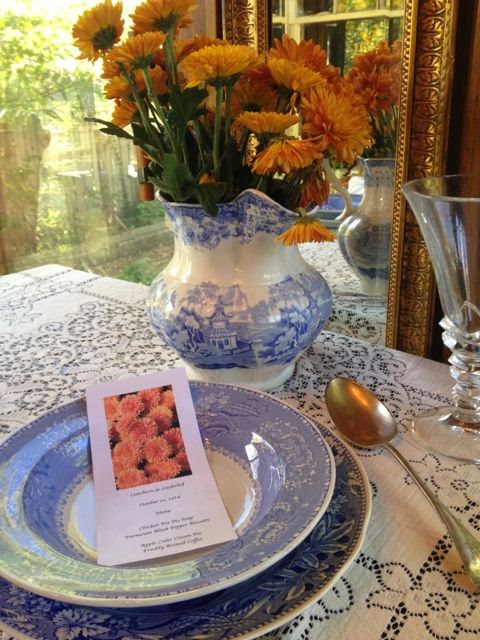 And my beloved blue and white
Because I love those Spode Camilla soup bowls
My BIG German silver spoons
Which I adore for soup
Jim not so much! 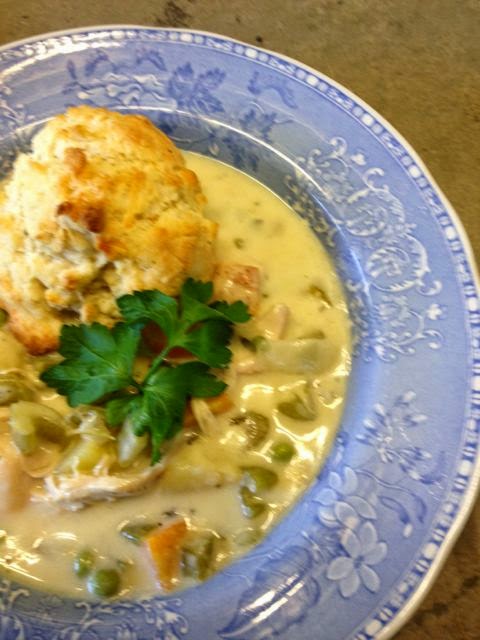 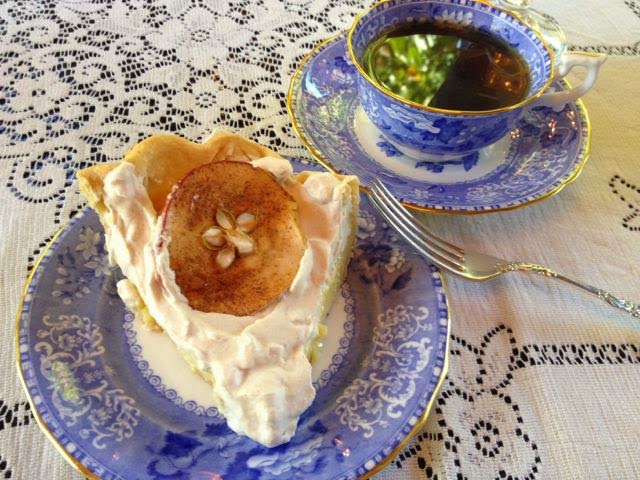 It's Thursday and I'm sharing my Luncheon Table with Susan at Between Naps On the Porch for Tablescape Thursday.

And for those who want the recipes:

APPLE CIDER CREAM PIE
Crust:
1 cup flour
1 T. cornstarch
1 T. sugar
1 t. salt
1 stick unsalted butter, cut into 1/2 inch dice and chilled
3 T. cold milk
1 t. apple cider vinegar
Filling and Topping:
2 c. apple cider
1 c. sugar
1/2 c. sour cream
1/4 t. salt
4 large eggs
1 cup heavy cream
1/2 t. cinnamon
In a food processor, combine the flour, cornstarch, sugar and salt. Add the butter and pulse in 1 second bursts until the mixture resembles coarse meal. Combine the milk and vinegar and drizzle it on top. Pulse in 1 second bursts until the dough just comes together. Turn the dough out onto a work surface, gather up any crumbs and pat into a disk. Wrap in plastic and refrigerate until chilled, about 30 minutes.
On a floured work surface, roll out the dough to an 11 inch round, a scant 1/4 inch thick; ease it into a 9 inch glass or ceramic pie plate. Trim the overhanging dough to 1 inch and fold it under itself. Crimp decoratively and chill the crust until firm, about 15 minutes.
Preheat the oven to 425. Line the crust with parchment and fill with pie weights or dried beans. Bake in the lower third of the oven for about 15 minutes, until the crust is barely set. Remove the parchment and pie weights. Cover the edge of the crust with strips of foil and bake for about 15 minutes longer, until the crust is just set but not browned. Press the bottom of the crust lightly to deflate it as it puffs; let cool. Lower the oven temperature to 350.
In a medium saucepan, boil the cider until it’s reduced to 1/2 cup, about 10 minutes. Transfer to a bowl and let cool. Whisk in the 3/4 cup sugar, the sour cream and salt, then whisk in eggs.
Pour the custard into the pie shell without removing the foil strips. Bake the pie in the lower third of the oven for 35 to 40 minutes, until the custard is set around the edge but the center is slightly jiggly. Let the pie cool completely.
In a medium bowl, using an electric mixer, beat the heavy cream with the remaining 1/4 c. sugar and the cinnamon until firmly whipped. Mound the cream on the pie, cut into wedges and serve. Serve with baked apple slices.
Posted by Martha at 9:12 PM

Thanks for sharing ~
xo
Pat

Chicken pot pie soup sounds outrageous, and with this being totally soup weather it is next one I make. I have apple cider, too, so I can just reproduce your menu!

This menu looks wonderful. I've been making soups a lot recently, even if only the clean out your fridge sort of vegetable soup. We've had so many gray and drizzly cold days lately. But your soup looks so satisfying and comforting!

These recipes are making me salivate, and I didn't think I was even hungry when I sat down to read! I am saving both, because this soup most definitely will be on the agenda for next week.

Looks like a lovely lunch! Love those bowls and your soup sounds delicious.