Rainy Days
Fall, rainy days
Makes one hungry for comfort food
And we started with breakfast 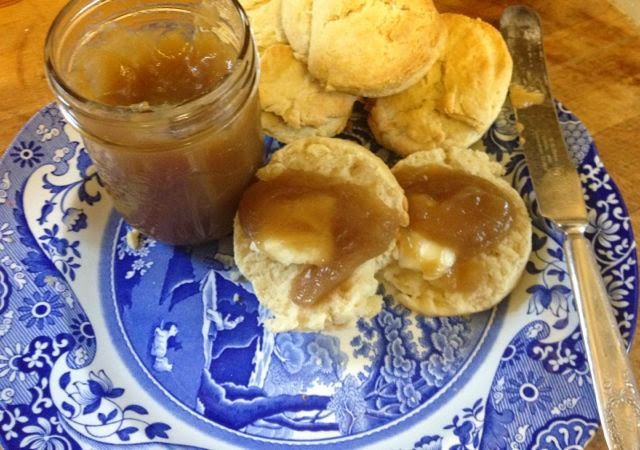 Fresh from the oven biscuits
slathered with butter and then topped with apple butter
Alas, not mine, but a jar my niece gifted me with
It was superb!

Oh, and we didn't just have biscuits --
we had a full breakfast --
bacon and eggs and orange juice!

Two rises --
And then 45 minutes of baking 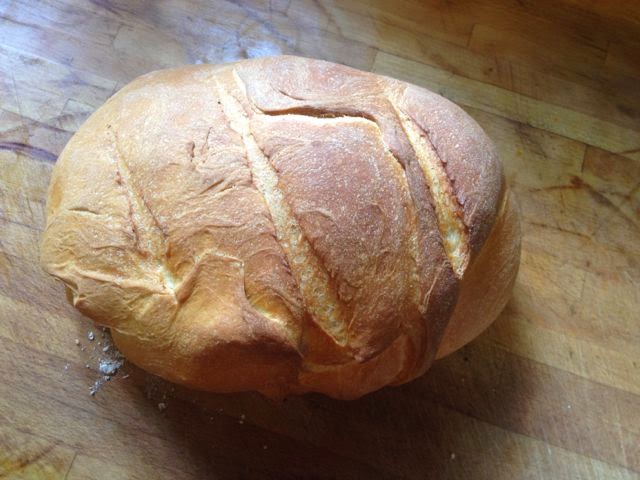 And this wonderful crusty loaf was the result.
I didn't realize (I should amend that to read I didn't plan)
that the bread would come out of the oven at lunch time
But it did! 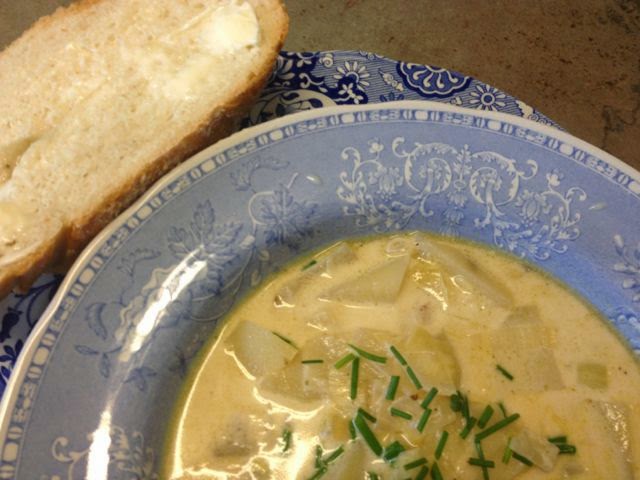 And once I realized that it would be warm at lunchtime,
I made a pot of potato leek soup.
Easy and quick
I even went out between raindrops to cut some chives for the soup!

Rain continued all afternoon
Getting rather dark at times

No frozen noodles for me!
No, those are homemade too!

I haven't made them for a while
My German grandmother
would not be happy at how thick they are!
She was a noodle expert
And hers were thin -- really thin! 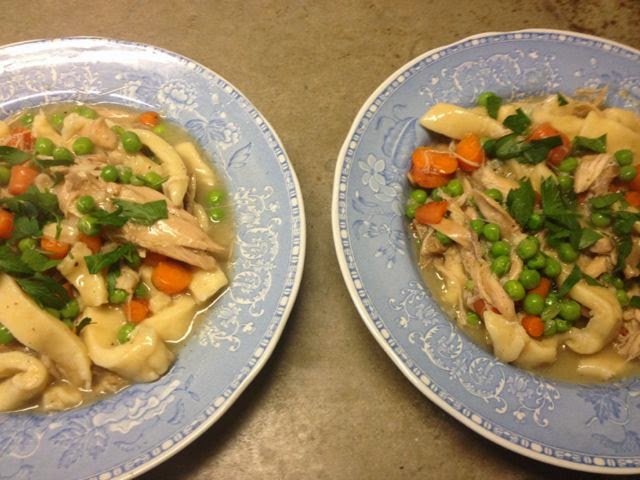 But they tasted superb.
A few carrots sliced, a few peas, the chicken and noodles
And a sprinkle of parsley
(not having to dodge raindrops to cut the parsley, however, the rain seems to have moved on!)

It certainly was a comfort food sort of day at Linderhof.

The recipes really aren't --
They're just the way Mom and Grandmother cooked.

The biscuits are self-rising flour and cream and a pinch of salt.
About 2 cups of the flour, 1 1/4 cups of cream, the salt and mix.
Knead a few times, cut with a biscuit cutter
And bake in a 450 oven until they're browned.

The potato leek soup is an onion, chopped; a few leeks cut into 1/2 inch pieces, browned in olive oil, then stock (chicken or vegetable) added along with some sliced and peeled potatoes.     Cook until the potatoes are tender -- then add "cream" and heat again.    Salt and pepper, of course, and garnish with chives if you have them!

The chicken and noodles are simple -- the stock made last night and the picked off chicken added to it.    I added water to the stock and put a few small Farmers Market carrots sliced in and cooked them until they were tender, then I added some frozen peas.    Before I did all that, I made the noodles -- 1 1/4 cups of flour, 1 egg, a pinch of salt and 1/4 c. milk.    Mix well.   Cover with a cloth and let sit for about 10 minutes.     The carrots and the peas were done and I had the broth at a good boil.    I rolled out the noodles on a floured covered board and then cut them into strips.    I put them into the boiling broth and cooked until the noodles were done.    Usually, the flour from the noodles is enough to thicken the broth, but if it isn't, I mix a little flour with a little water and add that.    Salt and pepper, of course.

Three meals of food and not one cookbook opened up!
But those were the meals of my childhood --
I'm not sure those were ever really written down!
You just "knew" how to make this dishes!

It's Friday and I'm sharing my day of Comfort Food with Michael at Rattlebridge Farm for Foodie Friday!
Posted by Martha at 7:56 PM

Looks and sounds wonderful. Nothing is better than a good home-cooked meal of comfort food. Yum!

Looks yummy! Your noodles look just like our southern "dumplings"- No balls of dough for us, but rolled out and cut in strips.

Just reading this post and seeing your beautiful photos is comforting! Nothing beats home-cooked meals!