I've been on a doughnut kick lately.    Perhaps because the missing doughnut pan was found when I cleaned my cabinets this January.     The never used doughnut pan.    One of those "I must have this" moment, that came home and then went into a cabinet.     Never to surface again until January cleaning!

Pinterest can be a good thing and a bad thing and I forgot what I was looking for but some lemon poppyseed doughnuts popped up.    I visited the site, bookmarked them and with the new never used just found doughnut pan, I made the recipe.

They were great for what we call "pre-breakfast" -- that coffee time before breakfast.     We got to calling it "pre-breakfast" in Italy when we would have a pastry with coffee on our balcony.

They were great, too, for what the German's call Kaffeetrinken -- afternoon coffee. 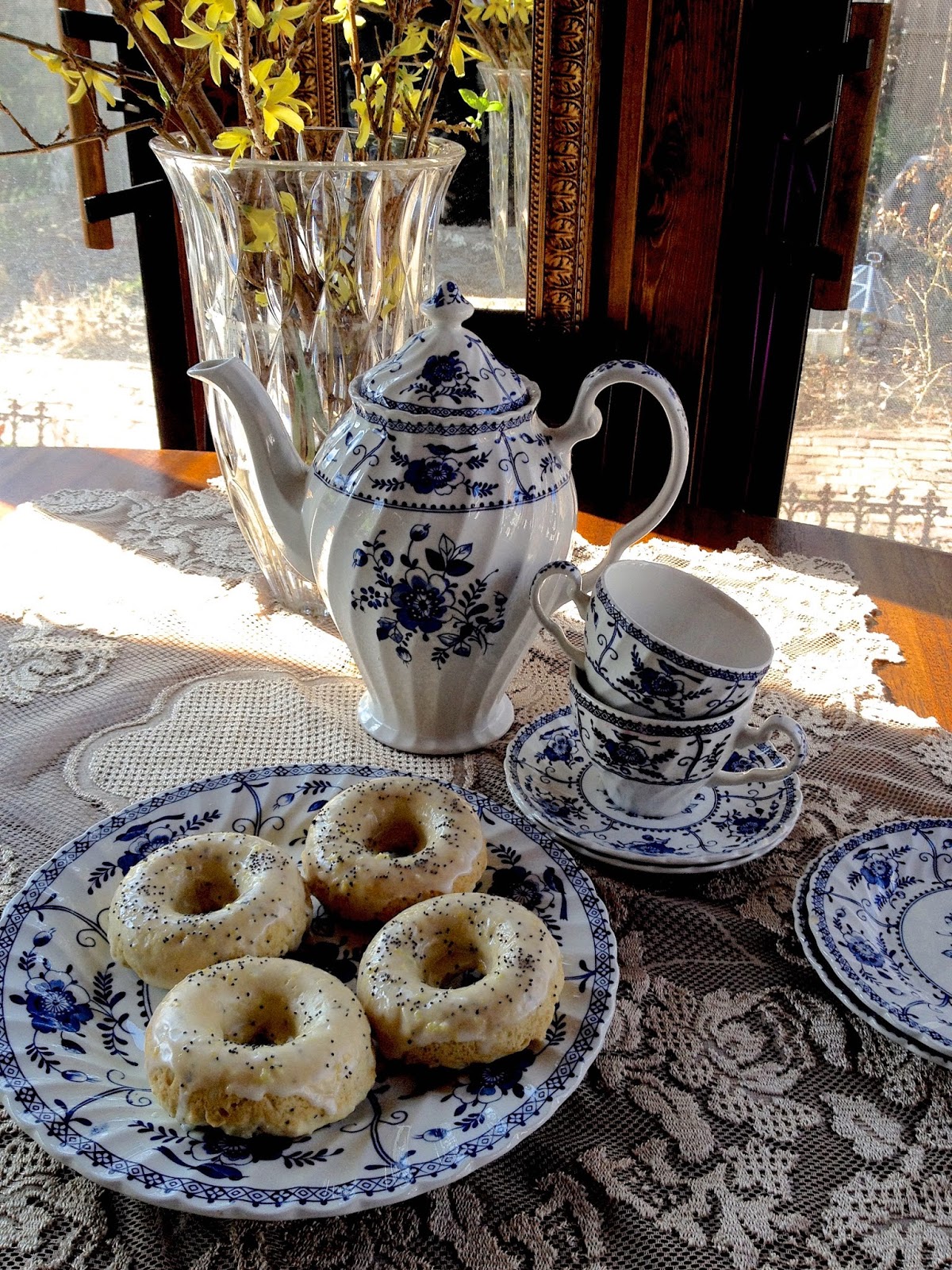 Coffee and doughnuts in the breakfast room.     Part of "pre-breakfast" one morning.

And the doughnuts themselves, they were easy to do, quick to bake and tasted amazingly good.    And they were as good the second or third day, when sealed tightly.    A plus for a household of only two!

I'm German and as everyone knows,  if three or more Germans get together, there has to be:

Many Germans are Lutherans and after service on Sunday, there are always treats and coffee.    We sign up for the treats and take our turn a time or two a year.

I chose this Sunday to take treats. 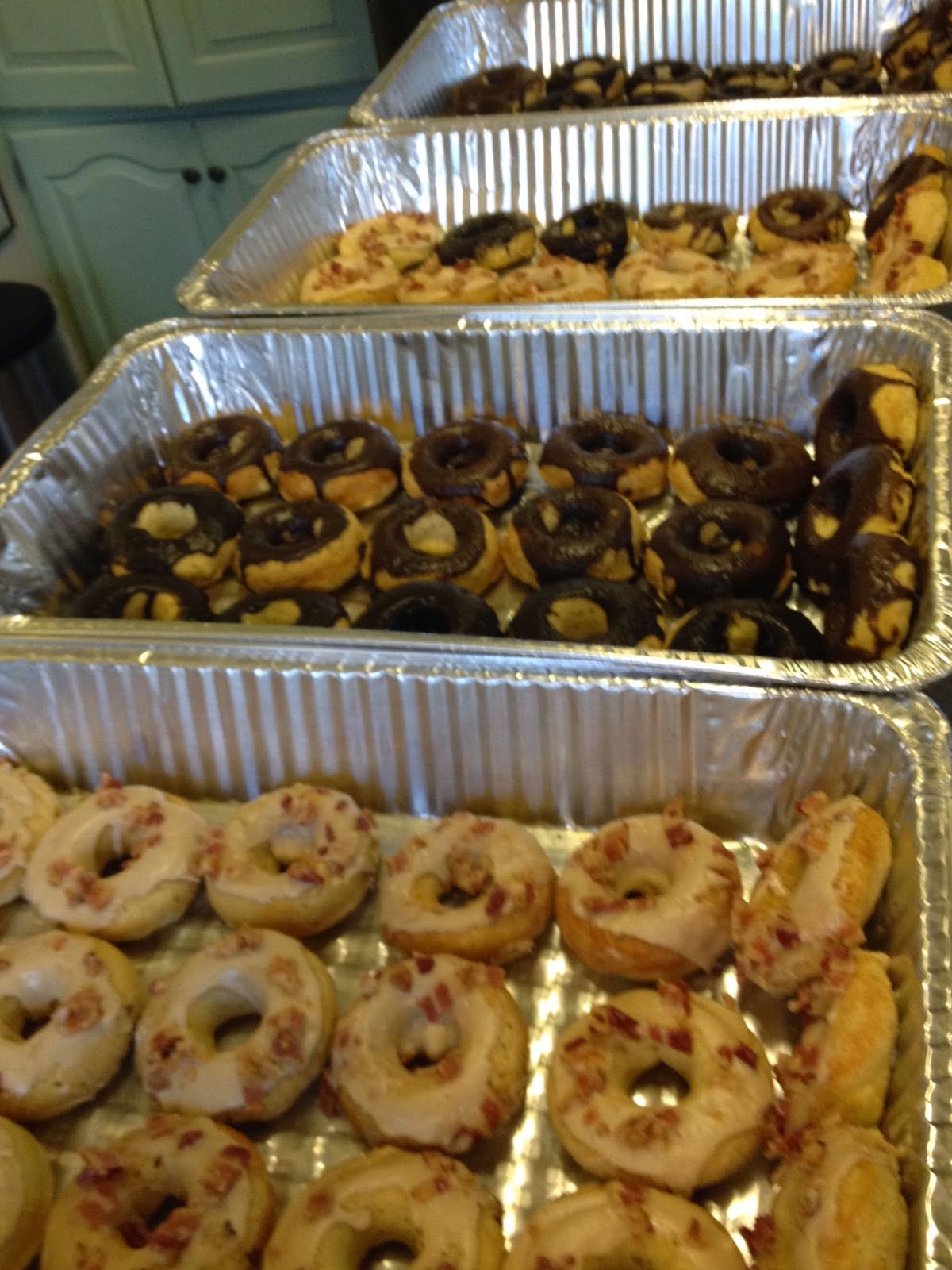 The pans of doughnuts ready for their foil cover.    I made the same recipe and glazed half of them with a chocolate glaze and the other half with a maple glaze and sprinkled those with bits of chopped cooked bacon. 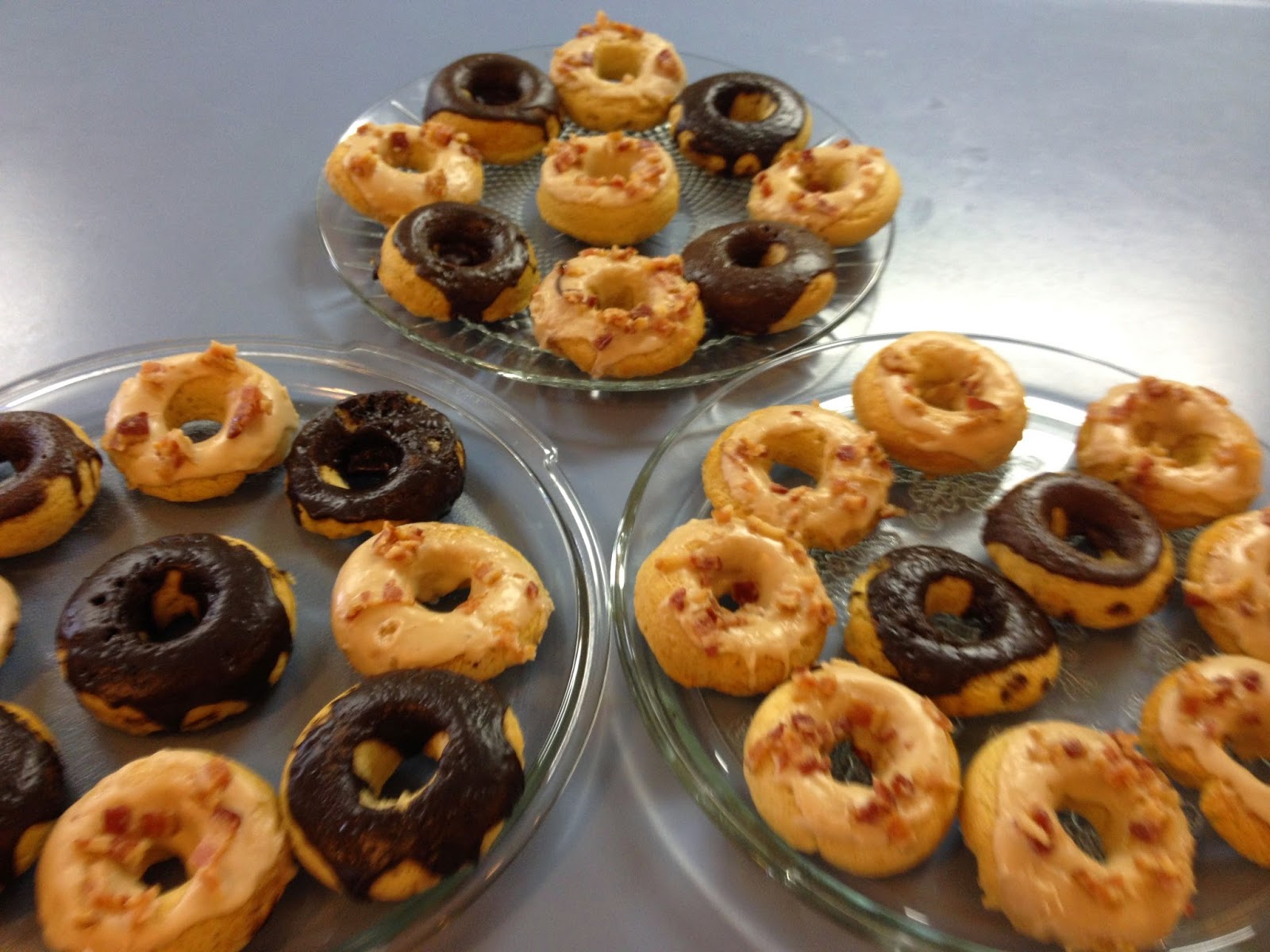 Three trays, refilled many times as parishioners came through for their coffee and treat.     I must admit that the maple bacon ones went first.     And it was a first time for many of having bacon maple anything! 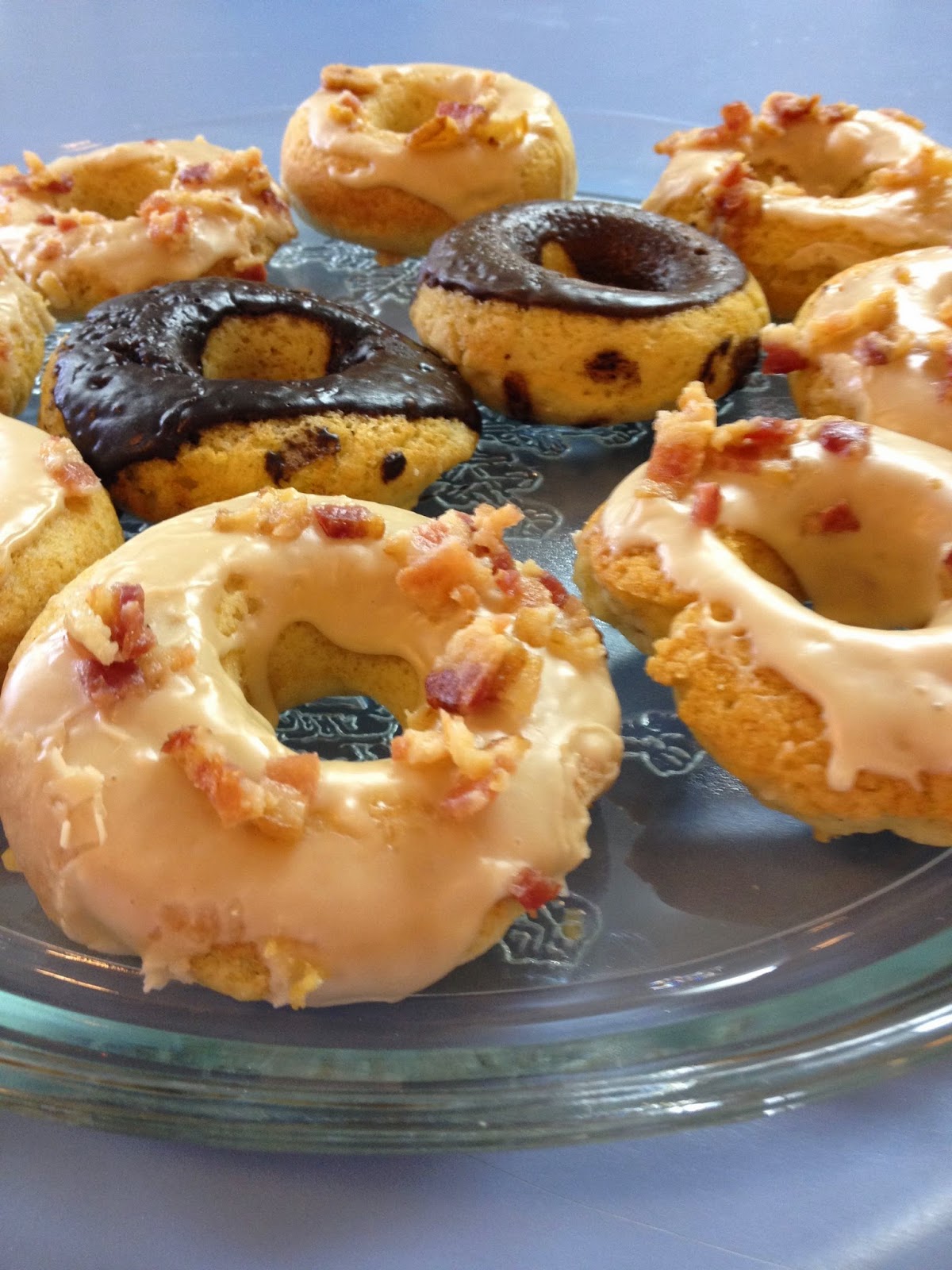 The doughnuts are really photogenic.   The pictures, however, had to be taken before the service ended -- the congregations flocked the kitchen for their coffee and treats! 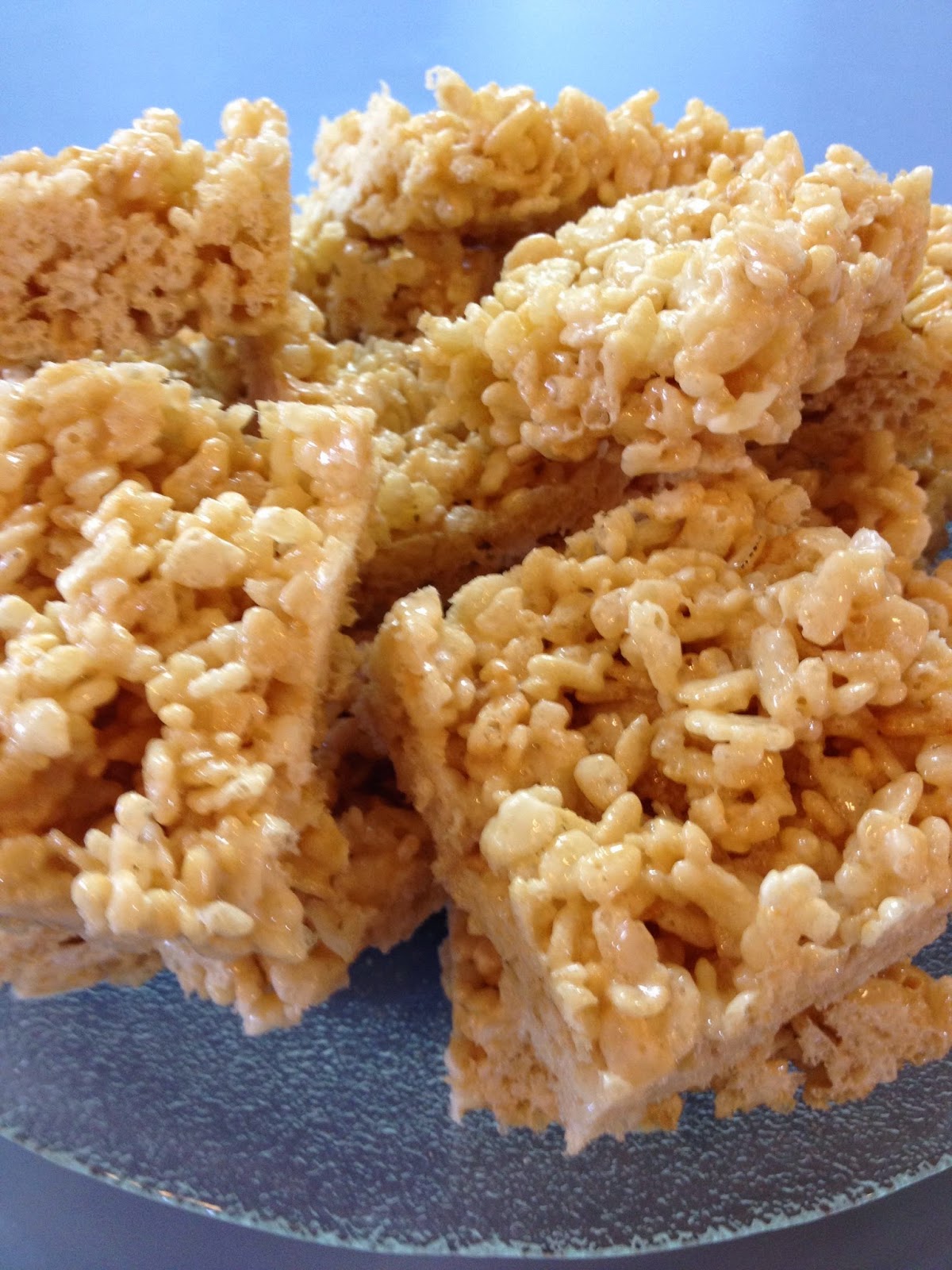 And even though the kids like doughnuts as well, I made Rice Krispy treats for them.    Many adults took one of those as well.    Most muttering something about not having one of these in a long time!

We brought very few doughnuts home and we made sure that the older single people in the conjuration got doughnuts to take home.

We did have two left -- so we had Kaffeetrinken this afternoon in the breakfast room!


LEMON POPPYSEED DOUGHNUTS
2 3/4 c. flour
1 t. baking powder
1/2 t. baking soda
1/2 t. salt
2 T. poppy seeds, plus more for sprinkling tops
1/4 c. butter, melted
1/4 c. vegetable oil
3/4 cup plus 2 T. granulated sugar
1 T. lemon zest
2 large eggs
3/4 cup plus 2 T. buttermilk
2 T. fresh lemon juice
softened butter, for buttering doughnut tins
Glaze:
1 3/4 c. powdered sugar
3 1/2 T. fresh lemon juice
Preheat oven to 375.    Butter 3 6-hole doughnut tins with softened butter and dust lightly with flour (shaking out excess), set aside.
In a mixing bowl, whisk together flour, baking powder, baking soda, salt and poppyseed for 30 seconds.    In a separate large mixing bowl, using an electric hand mixer set on low speed, blend together melted butter, canola oil, sugar and lemon zest for 1 minute.    Mix in eggs one at a time.   In liquid measuring cup used to measure buttermilk, whisk lemon juice with buttermilk  (It will curdle a little so you want to mix it in rather quickly).    Working in 3 separate batches, beginning and ending with flour mixture, add 1/4 of the flour mixture alternating with 1/2 of the buttermilk mixture and mixing just until combined after each addition.
Pour mixture into piping bag and pipe mixture (or spoon) into prepared doughnut wells, filling within about 1/4 inch of the top rim.    Bake in preheated oven until toothpick comes out clean, about 7 - 8 minutes.    Allow to cool slightly, then invert onto a wire rack to cool.    In a bowl, whisk together powdered sugar and 3 1/2 T. fresh lemon juice to make glaze.    Dip tops of doughnuts in glaze and return to wire rack, sprinkle tops with poppy seeds and allow glaze to set at room temperature.     Store in airtight container.
NOTE:   I only have one doughnut pan, so I used the one pan three times, buttering and flouring each time.

That was the original recipe.    For the Sunday ones, I omitted all the lemon and poppyseed and added a teaspoon of nutmeg to the recipe.     I then mixed powdered sugar and maple syrup until it was the right consistency to glaze half the doughnuts (I don't have measurements, I just put some powdered sugar in a bowl and poured REAL maple syrup over it until I liked the consistency).    I then sprinkled them with chopped cooked real bacon.     For the chocolate ones, I mixed powdered sugar and cocoa with a little milk until I liked the consistency (a little thicker than the maple syrup glaze) and then added 1 teaspoon of white corn syrup.
Posted by Martha at 4:45 PM

Thank you for posting this recipe ..rather that you baked your donuts.. My grandmother ( German / Hungarian) always made donuts but she deep fried them and I never really thought of baking.. I will give it a try...
I'm sure your church members loved them and your efforts appreciated ! 💒 💒

I've been craving doughnuts too. Of course, I'm craving a lot of things, because I've been trying to take off a few pounds ;)

These look easy and tasty!