It's been a busy week.     Rarely, do Valentine's, President's Day and Mardi Gras align so evenly as it did this year.

A Valentine Luncheon last Friday and on Tuesday, a Mardi Gras one.     Not a tradition.   In fact, I've not celebrated Mardi Gras as much as I did this year!     But Mardi Gras fell on The Lunch Bunch Tuesday.

So Let The Good Times Roll!

And because it was Mardi Gras, I invited my friend Shirley Ann to join the four of us.    She loves Mardi Gras!      Since Husband Jim was at loose ends (his coffee croney was at a doctors' appointment), I asked him to join us as well.     So it made six for lunch! 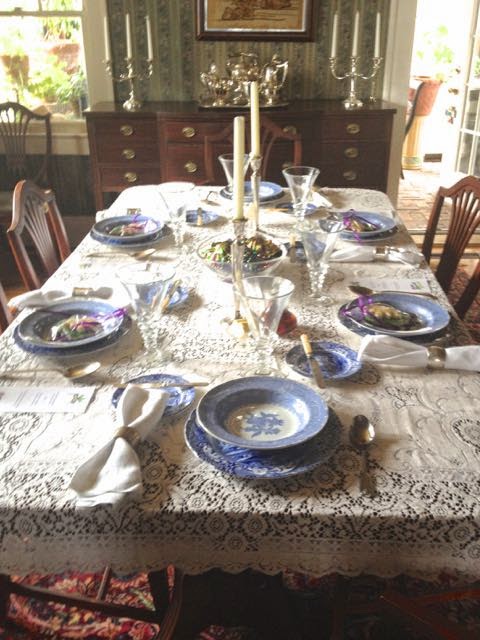 In the dining room, of course.     Lace tablecloth and my blue and white transferrer -- because we were having red beans and rice and it's really a bowled food! 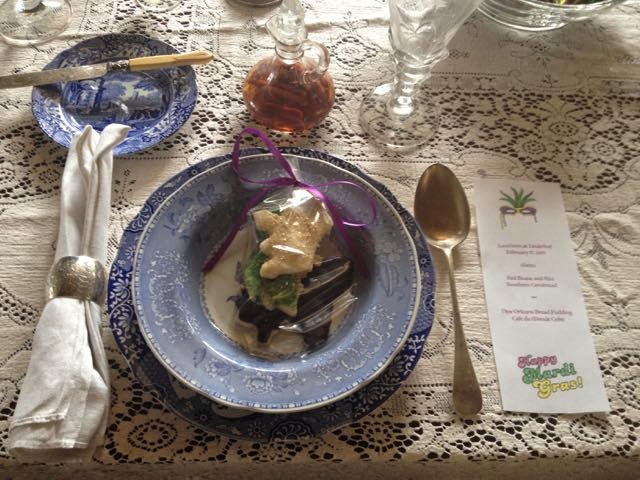 The blue and white transfer ware -- plate, a Spode Camilla bowl and a Spode Blue Italian bread plate with an English bread and butter knife.    Grandmother's German silver spoons, a white damask napkin in a silver napkin ring and a menu -- when The Lunch Bunch comes, there is always a menu!

And because of the entree, the bottle of peppers in vinegar gets a place on the table! No flowers for Mardi Gras but instead a glass bowl, filled with Mardi Gras beads.     Adding color to the table and making it much more festive.

We had a true New Orleans meal -- 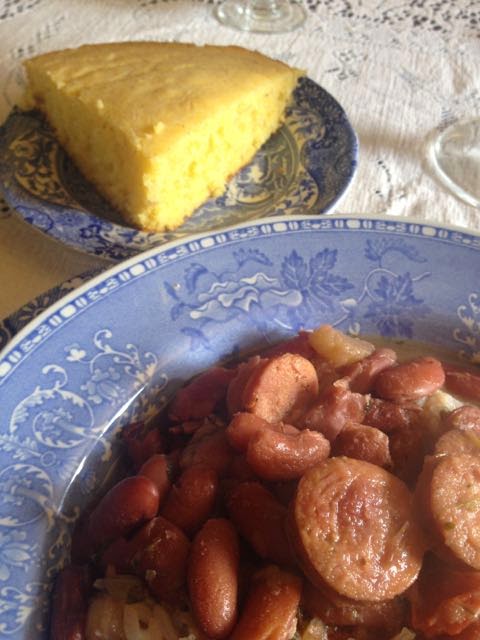 Cornbread (Southern style, no sugar) baked in a bacon greased cast iron skillet -- as grandmother would have done!     And red beans and rice with Andouille sausage!     Plenty of butter to melt into the hot cornbread. 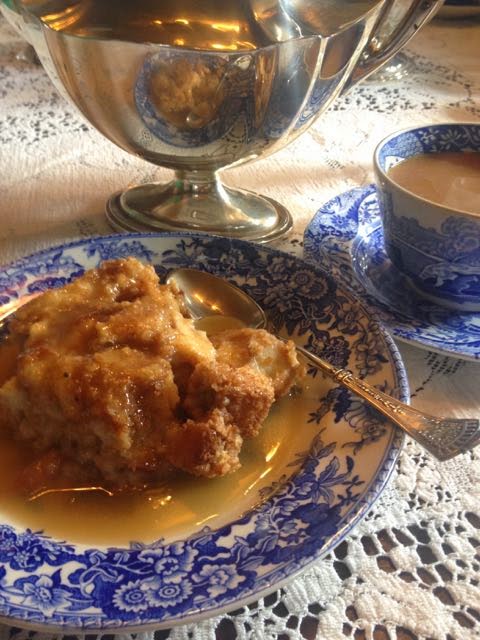 Bread pudding with Bourbon sauce for dessert.    The spoons are special -- there are six and they date from before the turn of the last century.    All are marked with "Helen" -- my mother had a cousin Helen and so I am reminded of her whenever I use the spoons!

It was a fun luncheon.    Much conversation and talks of New Orleans where friend Sally grew up.    She told great stories of Mardi Gras when she was a small child.    I said that we were to pretend that we were in New Orleans, enjoying this great food while Mardi Gras raged outside.     Every once in a while, I would say "Oh, look, there goes a float"!

But the Good Times Were Still Rolling Along . . .

Our PEO Chapter hosted a Mardi Gras fundraiser.     Some of us brought food.    My contribution? 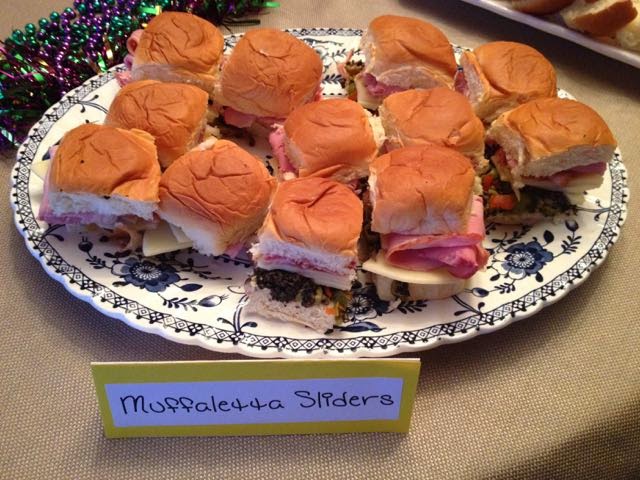 Muffuletta sliders!    Tasty little sandwiches that not only are great for Mardi Gras but they would be good, too, for Super Bowl Sunday, tailgating or a hearty appetizer buffet. 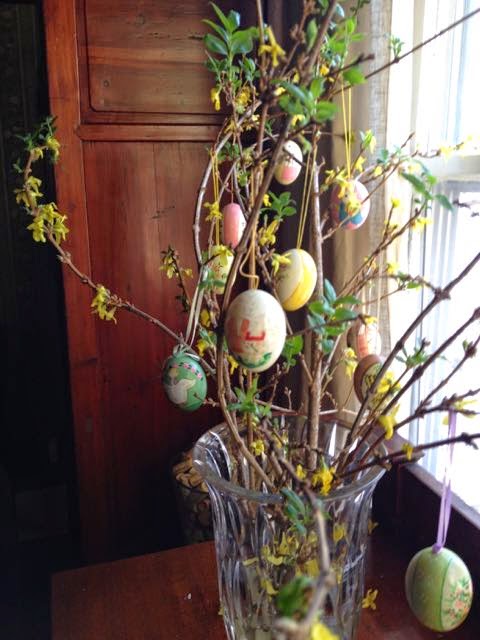 I put it up this morning.     On real forsythia branches that I bought.    (Ours are not nearly ready).    A dozen real hens eggs that we bought on a Lenten trip to Germany 23 years ago.      And used every year since.    I'm a purist -- I won't buy any more eggs to put on the tree.    It's the original dozen and only the original dozen!

1 jar sliced green olives, drained
2 small cans chopped black olives, drained (not much juice but I drained them anyway)
2 packages Hawaiian rolls
1 packages sliced Swiss cheese (had 11 pieces in it)
1 package sliced Provolone cheese (had 12 pieces in it)
24 slices deli thin ham
Drain olives and mix together.     Cut Hawaiian rolls in half (they are all together so you have a top and a bottom).    Spread half of the olive mixture on each bottom.     Cut the swiss cheese into 4 pieces and put 2 pieces on each “roll” (you will have 2 of them with only one piece but so be it), then put the slice of Provolone on top of that.     Fold the deli ham so that it is 1/4 of the size it was and put on top of the cheese.    Put top of rolls on and then cut into individual rolls.

Heat oil in a skillet over medium heat.    Cook and stir onion, garlic and bell pepper in oil until tender, 5 to 7 minutes.

NOTE:   I soaked the beans overnight before I cooked them.

It is Thursday and I'm sharing Mardi Gras with Susan at Between Naps On the Porch for Tablescape Thursday.

Your table looks wonderful, Martha. I love the mix of your blue and white. The menu sounds fabulous too. Ever since I read your post the other day and you mentioned there had been bread pudding at the Tea, I've been craving it. Today's post you share it with us. I am making some tomorrow. A different recipe but I will have my craving for it satisfied. Have a beautiful day.

You DID have a New Orleans luncheon. Looks delicious.
Is that a bag of Mardi Gras cookies for each guest? What a nice idea. Another poster had gifts for her guests too. I wish I would have thought of that.

And did I see a menu next to each plate? I think people always like to see what's coming next.

Love the fact that you shouted, "Look, there's another float!" That's on my list of silly things to do next year. I bet your guest chatted and laughed a lot.

This is so beautiful and the food preparation looks yummy. Hope you had a great time with family and friends. Thank you for stopping by. Love sujatha:)))

Your Mardi Gras luncheon looks amazing...my friend you outdid yourself with the great food and the gorgeous table setting as usual.
Just visiting from TT.
Hugs,
FABBY

Wow you did a wonderful job with the food! I am not familiar with these dishes but they sound good. The Mardi Gras beads in the bowl add just enough to do the job!

Always love the blue and white!

Your table is lovely, yes, but you have fixed one of my favorite meals and I am drooling!

I am so hungry now! Thank you for the recipes :)

Your table setting was beautiful.

Great post. Love your egg tree, which reminds me sooo much of the ones I've seen in Germany when we visit family and friends over there. Simple and natural…it looks like a photo straight out of Europe. Love it!