I've enjoyed it immensely and I look back at those old posts . . .
And realize what a "newbie" I was
How inexperienced
But I "soldiered" on

But the best thing about this journey . . .

Is all of you who I've met along the way!

Here's to the first seven years
And to many more

And in honor of that day, May 5, 2008,
I am reposting that first post
With an update following! 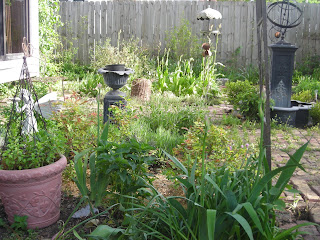 Iris always reminds me of my grandmother for her garden was always full of them -- mostly the old fashioned deep purple ones. She called them flags and they didn't bloom in her garden until around the end of May. They were always picked and taken to cemeteries on Memorial Day.

When I stopped by Sally's today to see a new plant, not only did I get a great cup of coffee which we sipped on her covered back porch while watching the birds and a dish of ice cream with strawberries but I also ended up with a grocery sack of iris -- pale purple ones -- so pale that they seem white.

None of the iris in Linderhof's gardens are that color and I put them in a special place. Where you can see them from the breakfast room. They won't bloom this year but they will bloom the next and those icy purple iris will always be a reminder of a day spent on a porch with a friend. 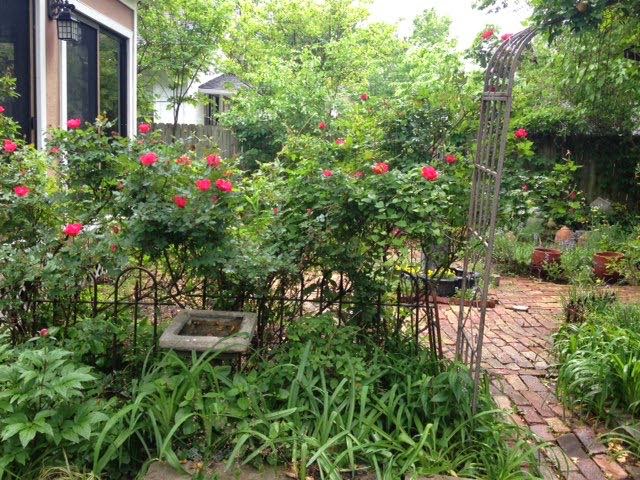 It's matured, there are roses and a fence and a birdbath
The iris mentioned in that long ago post have since been moved
The brick paths are the same
The arbor is the same
And the sundial in the middle is the same
(only now it's filled with flowers instead of water!)

I want to thank each and every one of you who visit Linderhof
for you certainly have enriched my life!
Posted by Martha at 2:00 PM

Martha,
Congratulations of seven years of blogging!!!
Cheers!!!. . .and here's to many more years of continued friendship in The Land of Blog!!!
Fondly,
Pat

The garden reflects all the fullness of getting to know so many fabulous people around the world! Blessings on many more years!

Hope you blog many more to come!

Congratulations and thank you for sharing your beautiful home and family. Look forward to reading many more posts. Hugs, Lucy

You started two years before me, but I was glad I found you. Learning you wrote from Ft. Scott was grand to me. I am a voyuer in your life, wishing I could stand in your shoes on some days. On Monday a friend dropped by in the morning. We took cinammon tea and Whiskey cake to the deck. As she passed through my kitchen, she commented on my cloth and mats. "Oh, I love your blue and white." Well, I told her she should see Martha's! I then proceeded to tell her all about you and your lovely tea things. Thanks for all the inspiration!

Wow 7 years! How fun to see the change in your garden. It gets more wonderful with each passing year. Thanks for the inspiration!

Congratulations, Martha! Your blog is a true treasure for all of your readers!

Happy 7th anniversary Martha and thank you for all the recipes over the years. I have made and enjoyed some of them.

Congratulations Martha. It has been a pleasure getting to know you. I have enjoyed your posts immensely over the years.

Congratulations Martha, I came to know you through the tea parties and have enjoyed whenever I visit. You have shared some tasty recipes over the years too, a few I've pinned and others I've made.
Happy Mother's Day!

Congratulations on 7 years. I first saw your posts on the HGTV board. Glad that I found your blog again.

Congratulations on 7 years. I first saw your posts on the HGTV board. Glad that I found your blog again.