My Inspiration -- The Herb Garden

A true treasure in Kansas City
is the John Wornall House 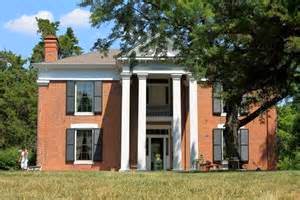 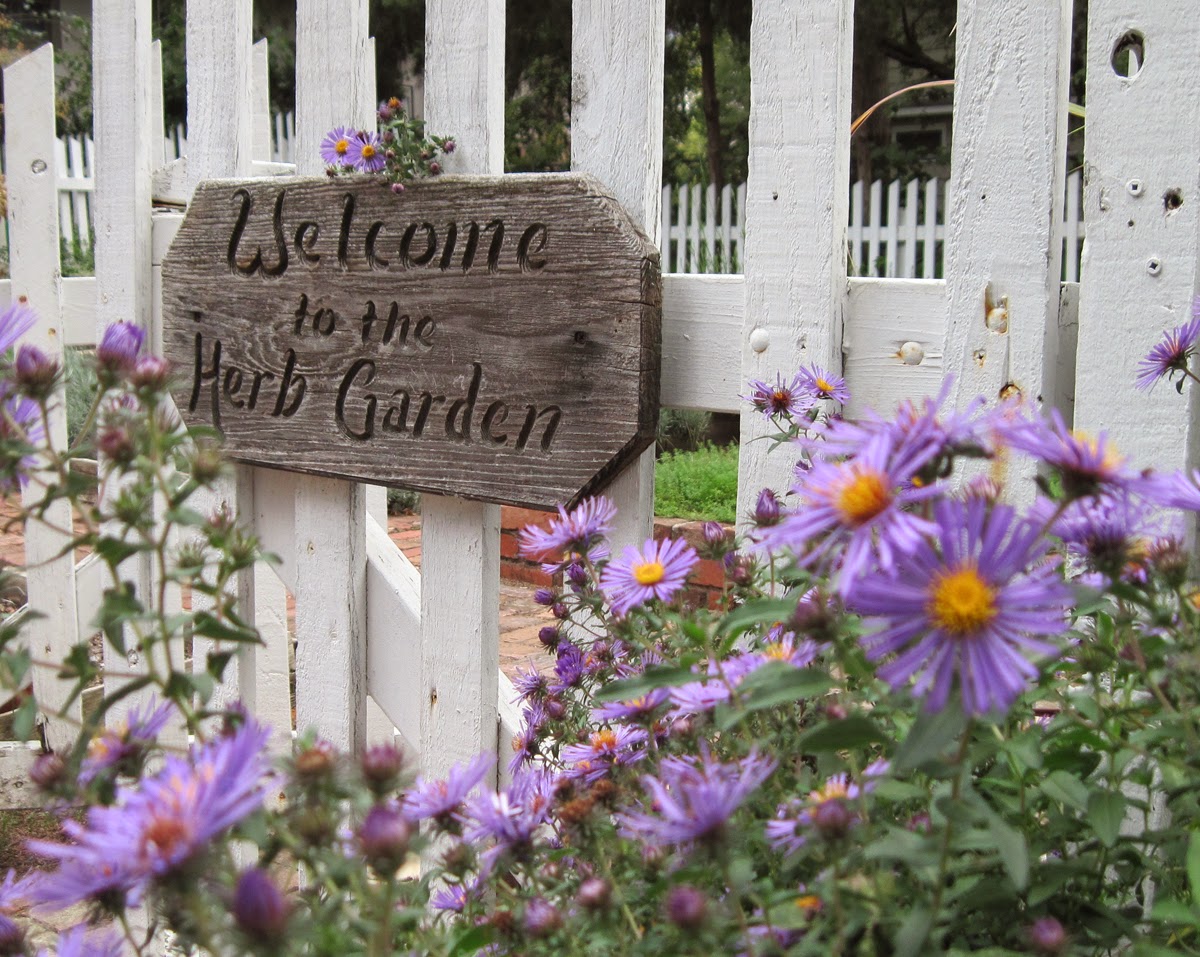 This herb and perennial garden contains the larges variety of herbs grown for public display in the Kansas City area.     Commissions by the Kansas City Herb Society in 1976, Dr. John Baumgardt designed the garden as a memorial to Kathryn Barnes Williams 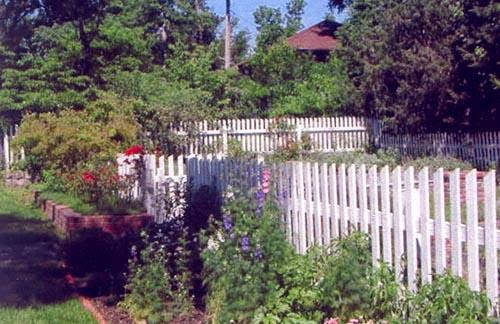 Although the formal enclosed design is more elaborate than a typical 19th century garden, the plantings are in keeping with the interpretive period of the house.

A variety of culinary and medicinal herbs share the garden and represent many of the plants deemed necessary to the life on the frontier.

In the mid 90s I discovered this wonderful garden,
And it was the inspiration for what became the final herb garden at Linderhof 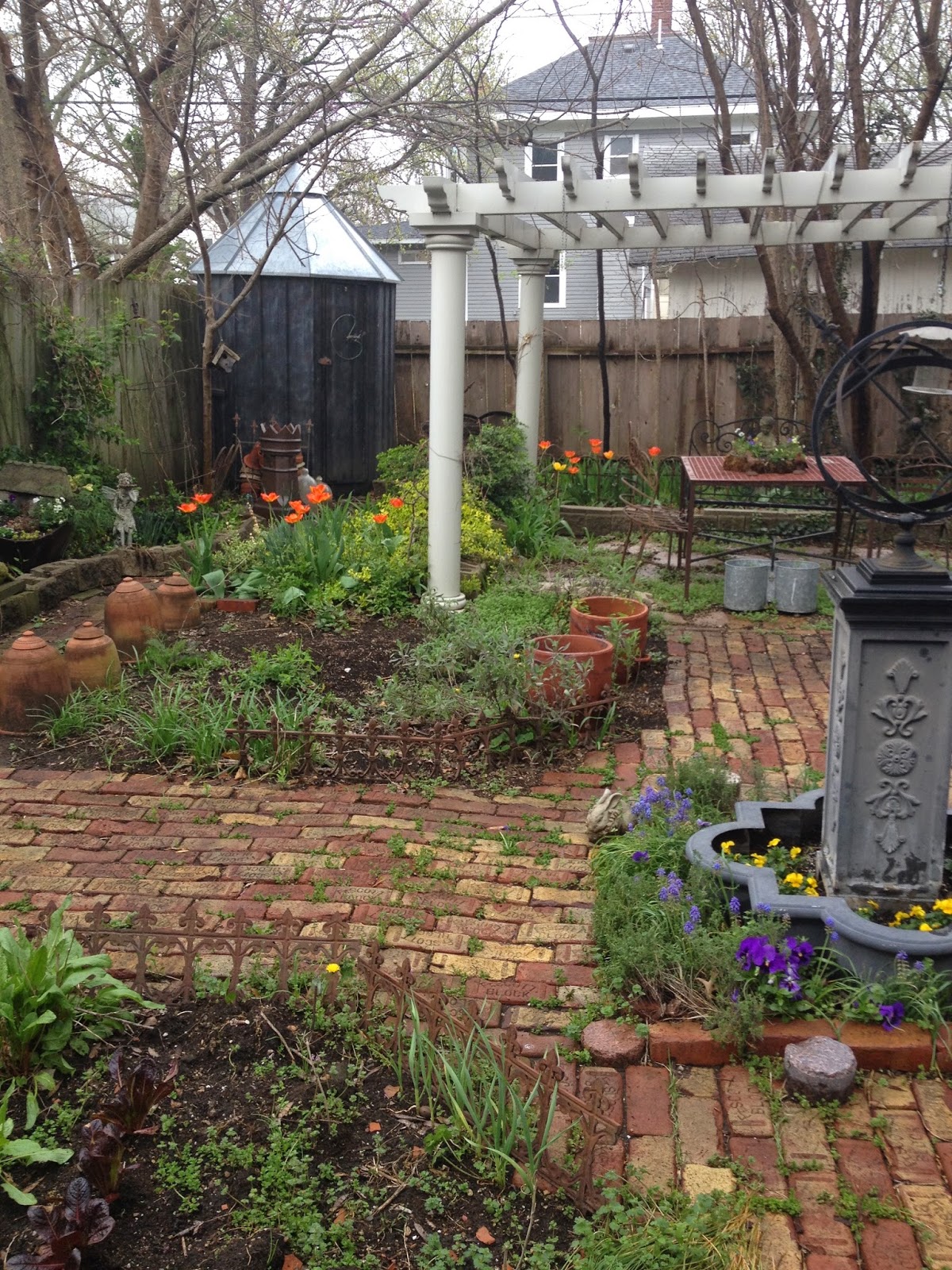 And going from a two barrel herb garden to a four square herb garden,
I needed inspiration for herb use in the kitchen 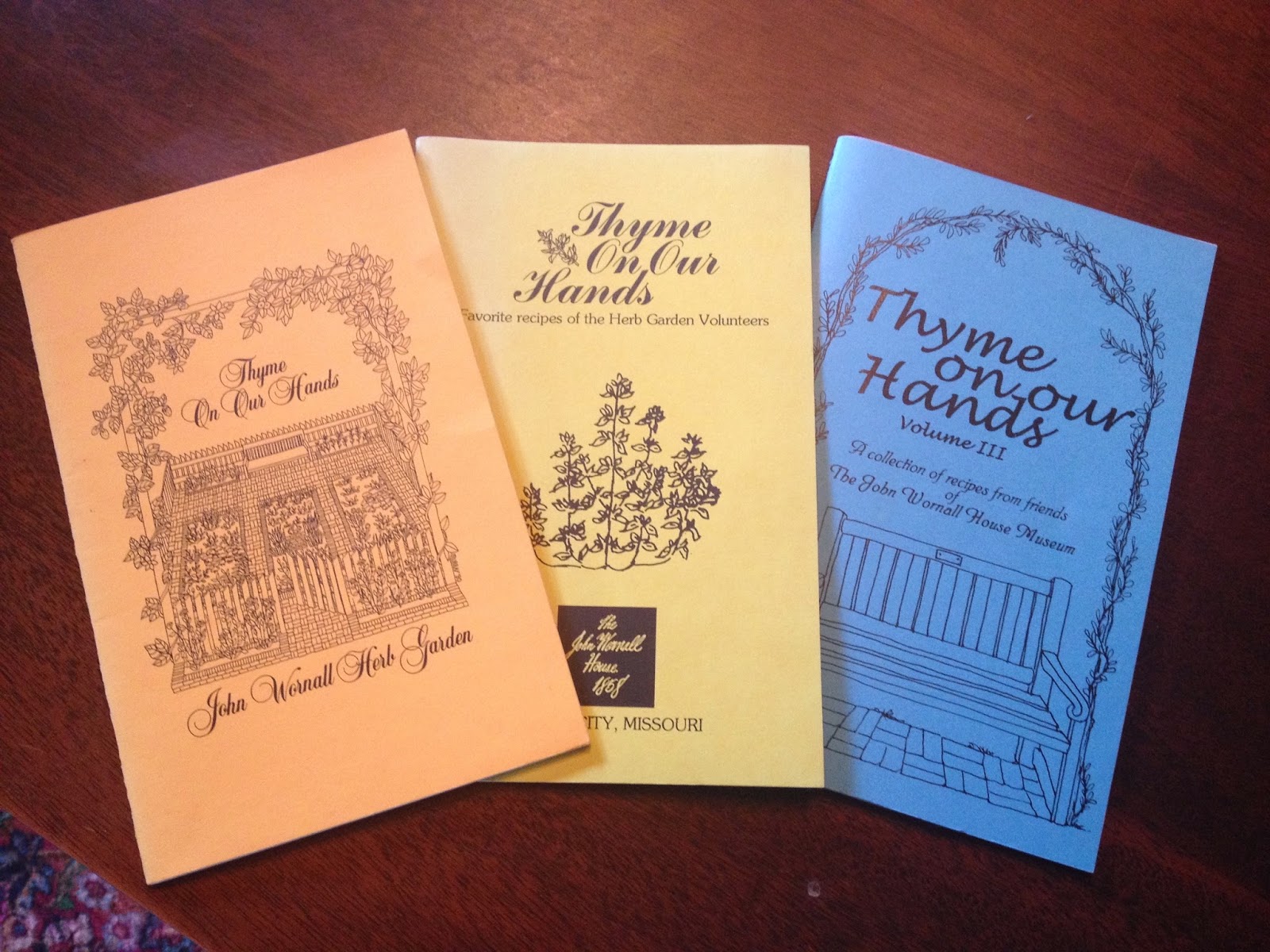 And, I bought these three books on a visit to the Wornall House.
All are titled "Thyme On Our Hands" and one is "Volume III" but I'm not sure which of the other two came first!

On one or two visits, they would have samples of some of the recipes.
Which were exceedingly good and which I still make. 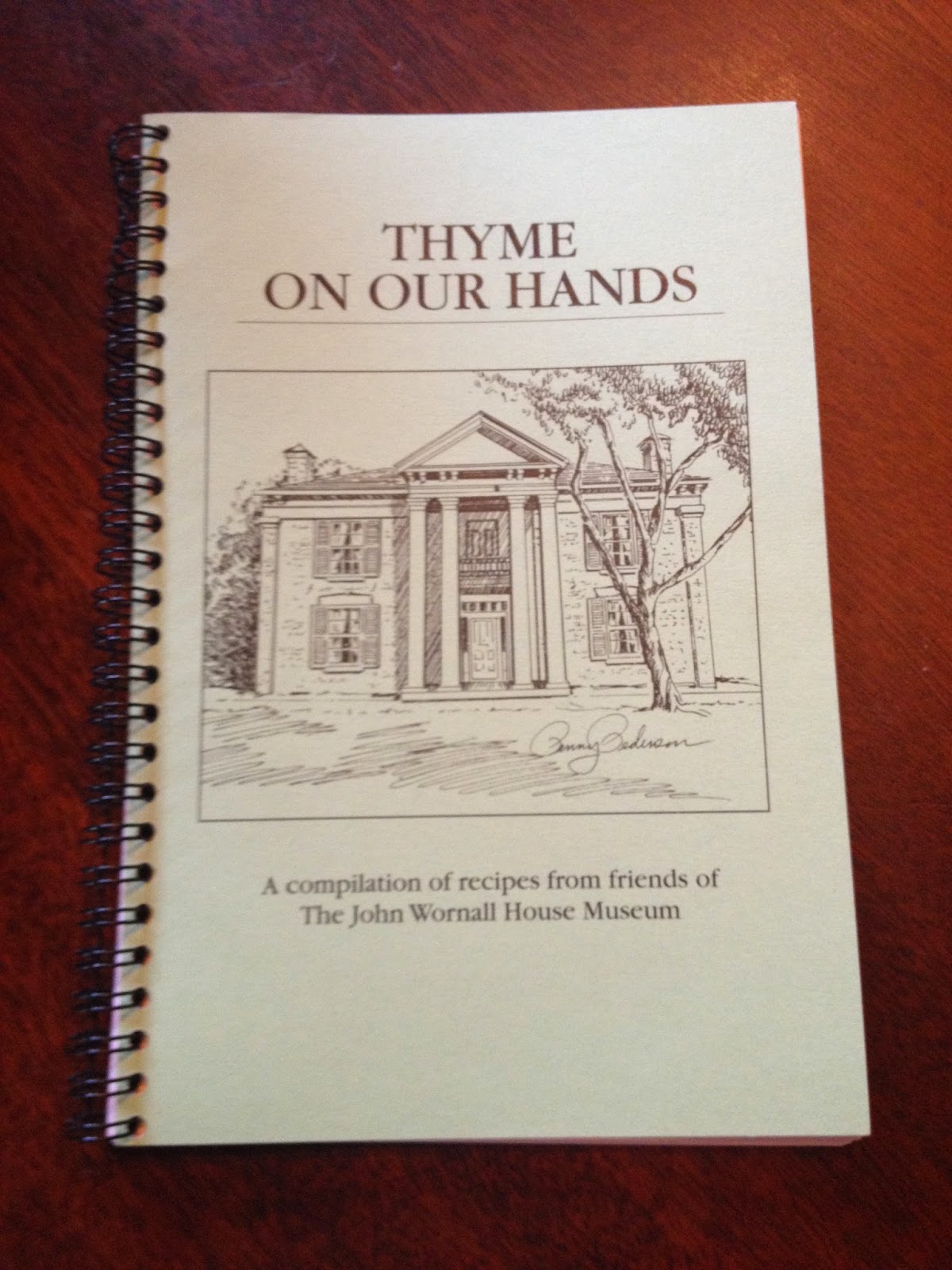 But lots of new recipes as well.

I love using my herbs in the kitchen
And there is hardly a meal at Linderhof that doesn't utilize herbs. 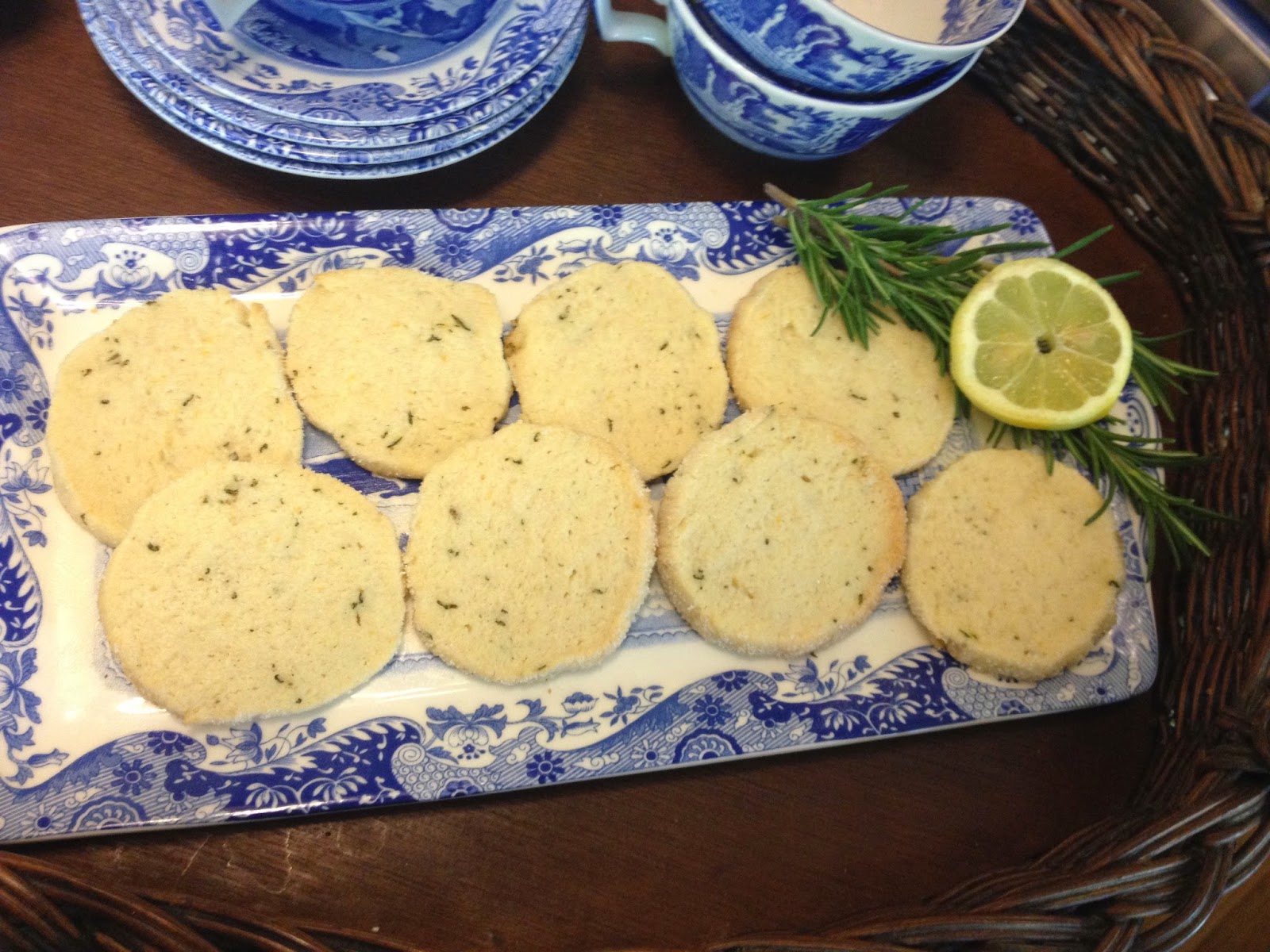 A platter of the lemon rosemary shortbread, napkins, spoons, a cream pitcher of pansies and cups and saucers on a wicker tray. 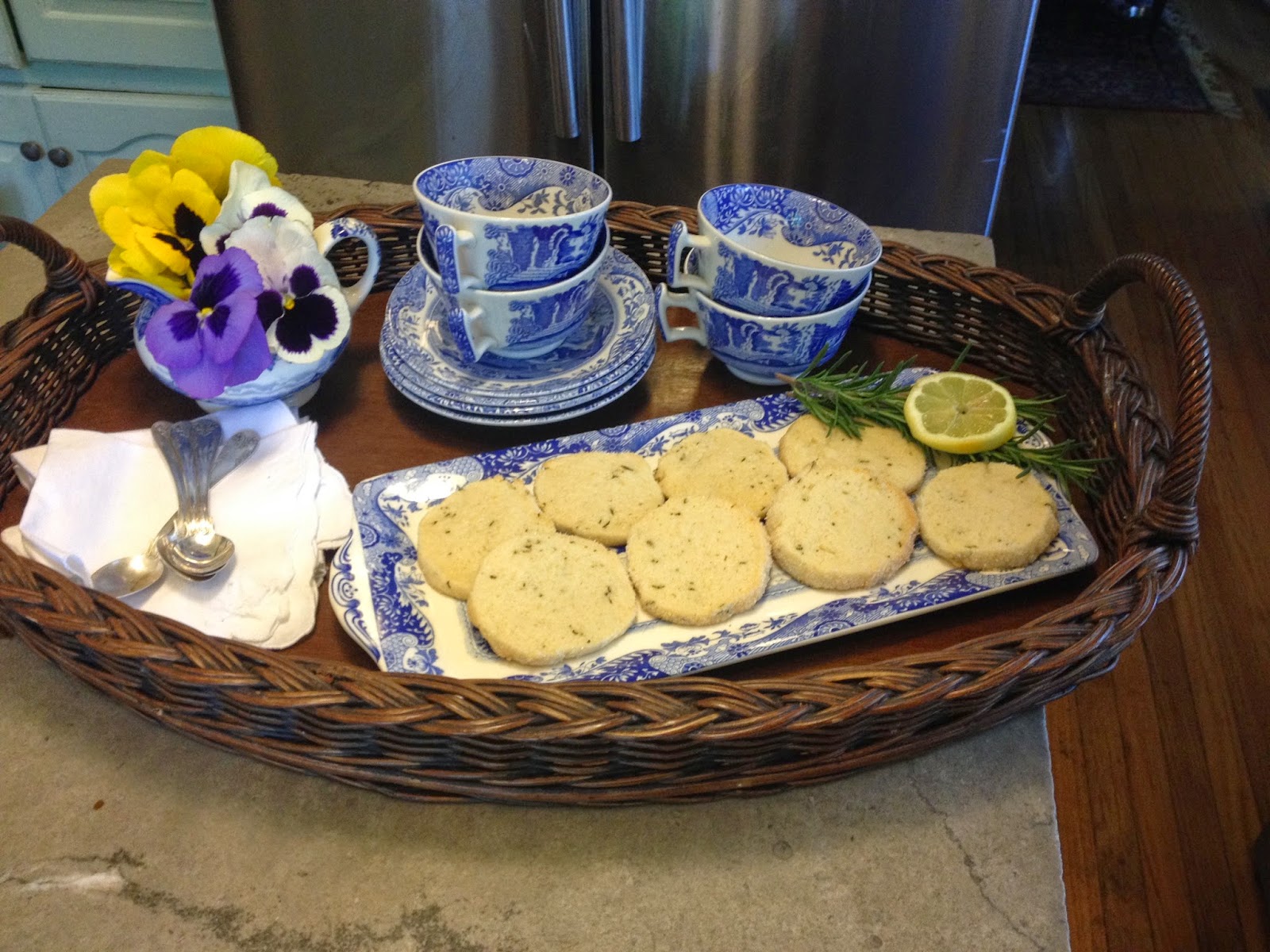 To be carried outside
And a pot of tea brought after!

For at Linderhof, I can do something that you can't do at the Wornall House Herb Garden 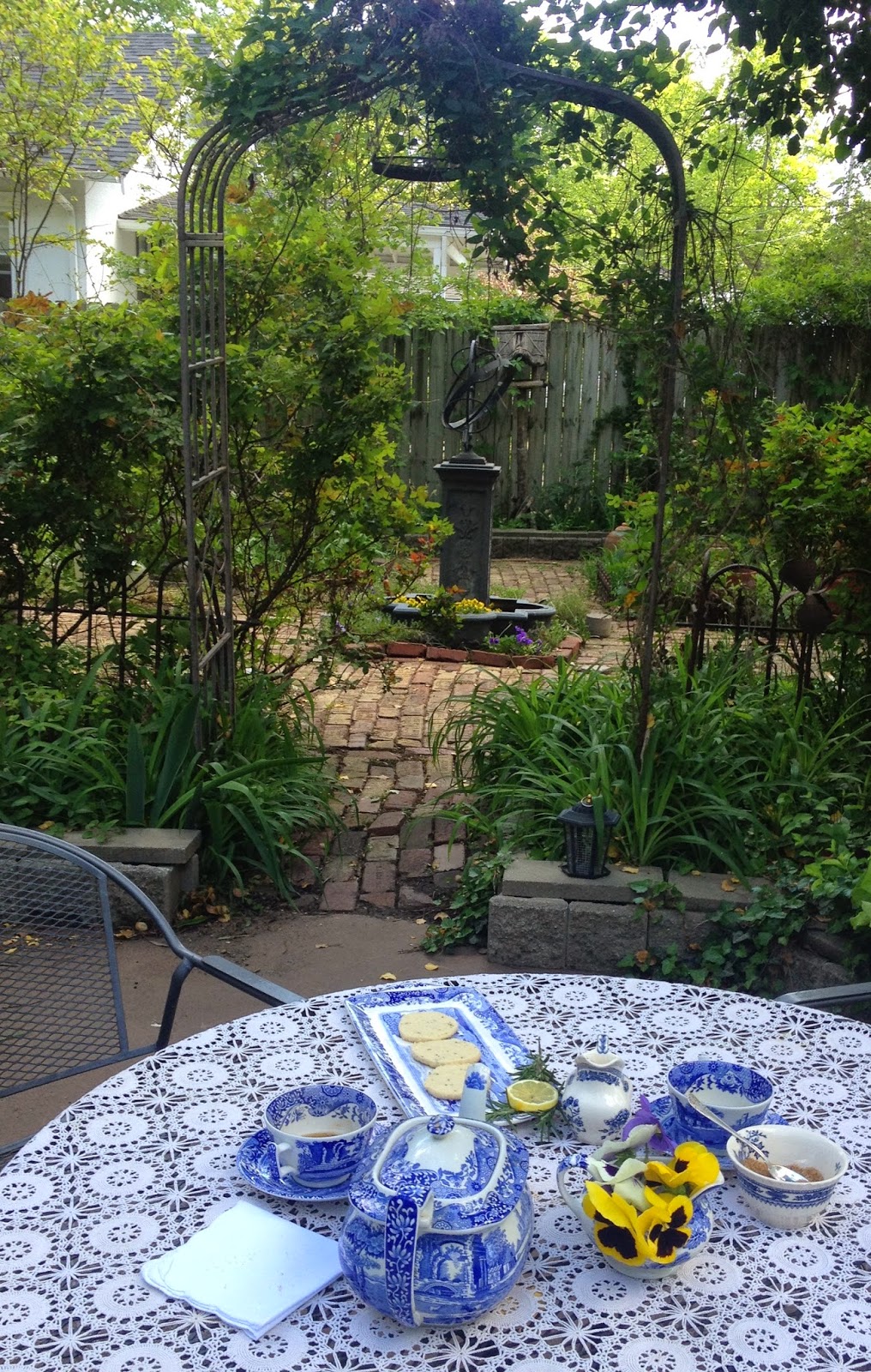 Have tea in the herb garden!

The lemon rosemary shortbread is a good cookie and one that I will definitely make again.
If you're not fond of rosemary, omit the herb -- the cookies would be almost as good without!

In a bowl of a stand mixer, cream together the butter and sugar until light and fluffy.    Add lemon zest and lemon juice, vanilla and egg and beat until incorporated.    In a medium bowl, whisk together the flour, salt and rosemary.    With mixer on low, gently add dry ingredients into butter mixture.     Mix until ingredients are combined and a stiff dough is formed.     Cut two 12 x 16 inch pieces of plastic wrap.     Divid dough in half and place one half of dough on each sheet.    Form the dough into 1 1/2 inch diameter logs.    Open the plastic wrap and sprinkle with sugar and roll a bit more to coat the logs well in sugar.

Wrap logs tightly in the plastic wrap, place on baking sheet and freeze for 1 hour or until firm.

Preheat oven to 375.    Line baking sheets with parchment paper.     Remove dough logs from freezer and remove the plastic wrap.   Slice dough into 1/4 inch thick slices and place on prepared baking sheets 1 inch apart.    Bake until cookies are just golden at the edges, about 12 to 16 minutes.    Allow cookies to cool on wire racks.    Store cookies in an airtight container for up to 4 days.

Your herb garden is lovely. It's intimate and welcoming.

Your garden is lovely! My inspiration was from Black Creek Pioneer Village in Toronto where there were different gardens around the different houses. I was especially taken with the doctor's garden. I still have a Stanwell Perpetual rose I tracked down after seeing it there. In those days (1974) it was not so easy to find special roses! But a garden is such a joy, especially at this time of year.

Pondie is right, your herb garden is beautiful. I'll definitely have to try these cookies. Love lemon, love rosemary. I'll bet they're divine. Thanks for sharing. xoxox

Martha, your garden is so totally gorgeous! Love all the brick and the arbor and the romantic table setting. Is your back yard all garden or do you have some grass areas too?

Those do looks wonderful. I am copying your recipe.Your garden looks perfect.

Martha,
Truly inspirational, dear friend.
And, yes. . .I do see the similarities, BUT . . .yours has a warmth about the Garden I find lacking in the original. Perhaps, it's due to the amount of "heart and soul" you've put into the refinement at Linderhof's Herb Garden!!!
The cookies are decadent. . .and sounds simply divine!!!Thank you for sharing!!!
Fondly,
Pat