Of Teapots and Treasures . . .

Friend Shirley Ann and I were out and about yesterday.
Visiting some of our favorite haunts in her little town
And this old teapot came home with me 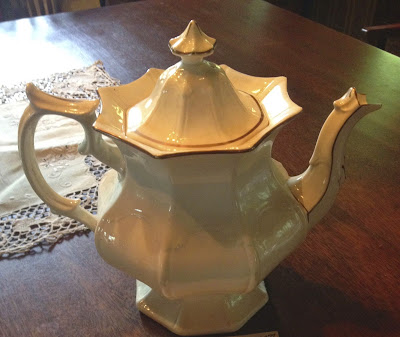 It's white with gold trim
And it was $5.00
And it looked to me to be very very old

Now, I don't really collect teapots!
But I do have a few!
And I use them! 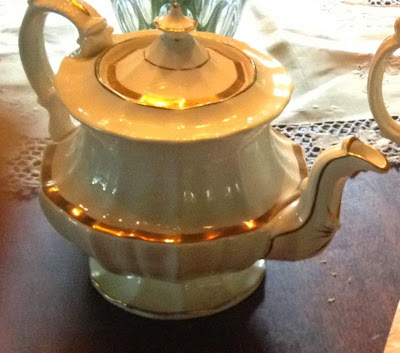 This lovely pot
Also white with gold trim
Made from Old Paris porcelain
Most Old Paris was made from 1850 to 1870
And I date this tea pot to around the Civil War
Perhaps around the time that our Fort got decommissioned!

I found it here -- in our little town
For a reasonable sum
And ever since I visited Natchez and heard about "Old Paris", I've wanted to own some.
And was so glad to find such a lovely set!

And this little pot 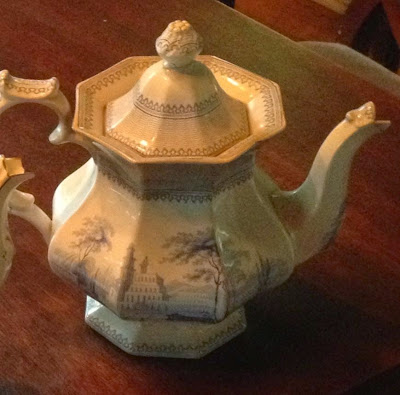 In my beloved blue and white.
It came with a creamer and sugar
and I found it at an Estate Sale in Independence
In a very old house that I longed admired
Admired since childhood, actually!

This pot is a common pattern (and I have a couple of salad plates in this pattern as well, picked up here and there) that dates to the early 19th century.

I couldn't believe my luck that this teapot, creamer and sugar were so reasonably priced and still there!

My three old teapots lined up on the dining room table
Notice the new pot and the blue and white one are similar in shape
While the "later" one -- the Old Paris is a different shape -- more round without the "angles" of the other two.

But what makes this teapot, the new one
So special
Is what I found inside . . . 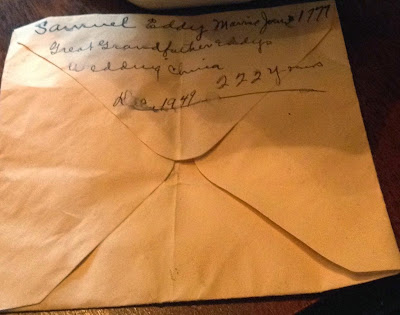 This note: which reads:

It's written on back of an envelope with a 2 cent stamp
(which would indicate that it was, indeed, written in 1949)
addressed to:

Now, I do know that family history can get confusing
And stories passed down are not always the truth.
I've looked on line to see what I could find as to
typical china shapes during the Revolutionary War
but couldn't really find anything.

Due to the fact that this teapot and the blue and white one which I know dates to the first part of the 19th century are so similar, I am wondering, perhaps, if it was made later
And was a 25th Wedding Anniversary gift and not the wedding china!

I do know one thing -- it is definitely old!

But whether it does, indeed date to the Revolutionary War
or is a bit later,
that note, penned by Mr. Frank will remain with the teapot
as long as I'm it's custodian.

Will I drink tea out of it?

But it is a treasure of Linderhof!
Posted by Martha at 11:57 AM

Oh, my, you did indeed find a treasure for your home. And I know that you are just the person to "treasure" it!

What beautiful teapots! If you are thinking about actually using them, I would suggest first examining them for crazing. If they are crazed, don't get them wet. If they are not crazed, try putting water in them to be sure they will hold water. If so, then you're good to go!

Thank you Marilyn -- I did not know that about the crazing. I have used the Old Paris one several times -- I like it and it gives me more of a connection to our little town which was founded about the time of that pot!

How very cool that you have that note! Love the shapes of these tea pots!

You new teapot and its history are wonderful! I love the teapot and I enjoyed this post. Happy Mother's Day!

What a great find and at a bargain price too!!! So enjoyed this post and pictures. I would love any of those tea pots. The connection to Potter's Hatchery was interesting as there were many in SE Kansas although I did not know of one in Girard. There was big operation in Chanute. When we moved to this Missouri town, a girl around the corner was a Potter...from the Chanute ones. And Hubby had a Mrs. Potter as a grade school teacher in Stark, Kansas. Small world it seems.

What fun! That's one of the things I love about antiques - the stories. If you can't find out the real history (as you were able to do), you can always dream up your own story! xoxox

Hi Martha,
What a great find and a great price! The teapots all look so good together. The note you have is neat too.
My daughter and I went to Leawood yesterday, on the way back we stopped at the antique mall on Noland Road, didn't buy anything though, but I did see some nice things.
Happy Mother's Day to you.
Gina

What a lovely find Martha. I love mysteries and would be anxious to find out more about the family, too.